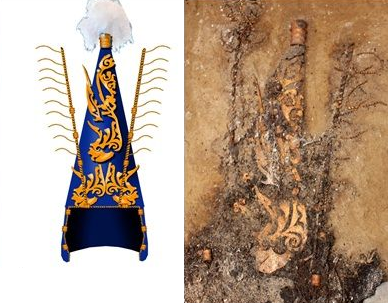 Remains of the young woman of a notable origin under a barrow embankment in a stone sarcophagus under massive granite plates, depth level on - 1,70 m were researched. In the chamber with the buried ceramic and wooden vessels and bones of a sacrificial animal – remains of a sheep were found.

Remains of fabric of clothes of blue and green color remained on bones of a human skeleton. Old earrings and a stone altar - indispensable attribute of female burials of that time were found at the head of buried woman.

The greatest value is represented by the peaked gold headdress ornamented with vegetable patterns and a zoomorphism ornament. The top part, decorated with a spiral from a gold wire has a headdress also arrow-shaped. The lower part of a product was decorated by ancient jewelers (zergers) with corrugated suspension brackets. In a form and an ornamental embodiment, the find reminds national Kazakh female headdresses saukele and borik.

Similar headdresses as it is supposed were accessory of a full dress of Saka tribes of Kazakhstan. The similar find in Kazakhstan is known only in the well-known Issyk barrow relating to the same time, as the burial in the Urdzhar area.

The "Princess" from Urdzhar is preliminary dated back to the IV-III centuries BC.
link

the Republic of Kazakhstan - a Turkish Republic

Is a contiguous transcontinental country in Central Asia, with its smaller part west of the Ural River in Europe. Kazakhstan is the world's largest landlocked country by land area and the ninth largest country in the world; its territory of 2,727,300 square kilometres (1,053,000 sq mi) is larger than Western Europe.


*
"Kazakhstan has a population of 17.7 million, with 131 ethnicities, including Kazakh, Russian, Ukrainian, German, Uzbek, Tatar, and Uyghur"...

And we do know that, back in the centuries, many of Turkish tribes lived in Russia, Ukraine and Germany....and still living..... There are many Turkic Tribes , stop calling as "different ethnics"!...

What did Napoleon say : " Crash the Russians and beneath you will see the Tatars" which is Turk......


*
"The territory of Kazakhstan has historically been inhabited by nomadic tribes" "nomadic horsemen"...

Be honest and say the truths: BBC NEWS LİNK ! 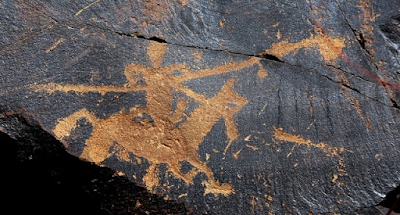 "ALL TURKISH PEOPLES,
UIGHURS, KÖK-TURKS, OTTOMAN TURKS,
BELONG TO THAT CENTRAL GROUP OF EURASIAN HUMANITY WHICH WE ARE CALLING
"SCYHTIAN"."

THE TURKS and TURKISH REPUBLICS
LİNK