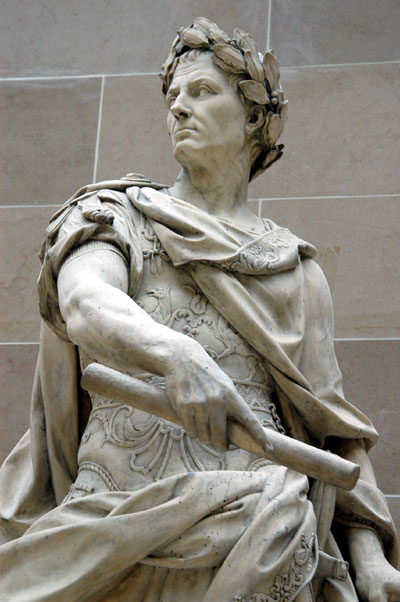 
Roman kings with pride remembered their Trojan ancestry . Julius Caesar bore the name Yul, the son of Eney, a Trojan commander, who led the Trojan immigrants to Italy . Numerous Roman names of Trojan origin appear to be old Turkic.

Yul, for instance, is the same Turkic Yul, used by the Tatars and Bashkirs as a personal name . Yul and other Trojan personal names are usually interpreted on the basis of Latin or Greek appellatives, which is not logical at all. For instance, Julius (Yul) is referred to the Greek word ioulos «curly-headed» .

It is not logical, because the Trojans, known to have been neither Roman nor Greek by origin, could not have had Roman or Greek names during that period. They had settled these lands before the Greeks. What is more, the Romans and Greeks did not themselves have analogical names.

Caesar (kesar), applied as a cognomen to Roman emperors, could have been related to the old Turkic kezer («leader», «hero»), used to denote a high title]. It may be a cognate of the Kirghizian kaysar («brave», «strong», «courageous» whose semantics permits its transformation into a higher title.

The first component (Gay) of the name of Gayus Julius Caesar, the Roman dictator, is comparable with the old Turkic Gay - a tribal name belonging to the Turkic tribe Oghuz and with Kay, a Kipchak tribal name.

Transformation of a tribal or dynastical name into the names of persons is common for the anthroponomy of all peoples.....

from the book "Suetonius: The Lives of the Twelve Caesars" Book I Caesar:82

As he took his seat, the conspirators gathered about him as if to pay their respects, and straightway Tillius Cimber, who had assumed the lead, came nearer as though to ask something; and when Caesar with a gesture put him off to another time, Cimber caught his toga by both shoulders; then as Caesar cried, "Why, this is violence!" one of the Cascas stabbed him from one side just below the throat. Caesar caught Casca's arm and ran it through with his stylus, but as he tried to leap to his feet, he was stopped by another wound. When he saw that he was beset on every side by drawn daggers, he muffled his head in his robe, and at the same time drew down its lap to his feet with his left hand, in order to fall more decently, with the lower part of his body also covered. And in this wise he was stabbed with three and twenty wounds, uttering not a word, but merely a groan at the first stroke, though some have written that when Marcus Brutus rushed at him, he said in Greek, "You too, my child?" *** All the conspirators made off, and he lay there lifeless for some time, and finally three common slaves put him on a litter and carried him home, with one arm hanging down. And of so many wounds none turned out to be mortal, in the opinion of the  physician Antistius, except the second one in the breast.  The conspirators had intended after slaying him to drag his body to the Tiber, confiscate his property, and revoke his decrees; but they forebore through fear of Marcus Antonius the consul, and Lepidus, the master of horse.

*** It is quite possible to speculate that Caesar was being literal, and that Brutus was his son. "But beyond all others Caesar loved Servilia, the mother of Marcus Brutus, for whom in his first consulship he bought a pearl costing six million sesterces" , ch.50.2

As you can see Caesar do not say Brutus, but Child: "You to my child?" Brutus was in William Shakespeare' Julius Caesar after Suetonius (70-126 AD) works.