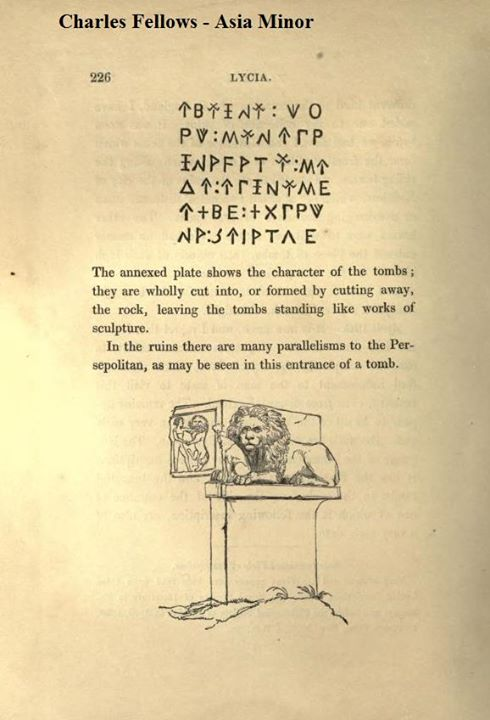 In the section misleadingly tacked into Chapter 7 "The Greek Alphabet", Isaac Taylor, in his founding monograph, traced the provenance of a group of symbols that fall outside of the Egypto-Semitic-Greeco-Roman evolution line. These characters, that showed up in a number of Anatolian alphabets, Isaac Taylor classed as "Asianic" scripts, and traced them to an independent line of development that occupied Asia Minor in the 2nd millennia BC. Isaac Taylor traced the vestiges of that stand-alone writing script back to the Hatti-Hittite states, known at his time as a Hittite state. In the conclusion of the Asianic section I.Taylor presents a table showing examples of a genetic connection of the "Hittite" syllables with the later syllables of the Cypriote Syllabic script. That table is remarkable not only in illustration of derivation of the Cypriote Syllabic script elements from the Hatti-Hittite script, but also by allowing juxtaposition that demonstrates a remarkable resemblance of the Cypriote Syllabic elements with the letters of various Türkic scripts. S.Amanjolov initially demonstrated the probable derivation of the Eastern Asian Türkic scripts from the Phoenician in the 1971, and further substantiated that thesis  in his 2003 monograph, but he stopped short of following the evolution of the Türkic scripts to the levels older than the 12th c. BC Phoenician script, and did not examined the Hatti-Hittite independent Asianic branch. Amazingly, the Türkic- Cypriotic connection was recorded among the Türkic genesis legends, see Djagfar Tarihi.

From the indications that accumulated by now, we can deduce that the art of  writing was transmitted, possibly by "Ki-en-gi"-Kangars-Shumers, or by a related tribe back to the Uzboi-Horesm area, since we know that Mesopotamia-Hyrcania (Tr. Yirk="nomad")-Aral belt was a range of the nomadic pastoralists, who served as a conveyor belt for the delivery of  Mesopotamian culture and products to N.Caspian, N.Pontic, and Central Asian steppe people. From there it could spread to the east along with permeation of the Afanasiev Kurgan Culture, until it reached the fringes of the Chinese tribes. At that point the trail becomes visible again, in time, space, and in the development level, since the expansion of the Afanasiev Kurganians is credited with passing a number of innovations from the steppe to the eastern tribes starting ca 1700 BC. One of these innovations could be related to writing. It appears that vestiges of this process are observable in the graphics of the various Türkic scripts.

The graphical depictions in the text are dropped in this posting, unless they are illuminative for Türkic history. The graphics can be viewed at the above http://books.google.com link. For S.Amanjolov work about history of the Türkic alphabets, see "Genesis of Türkic Runic Alphabet". For a review of the differences between IE flexive and Turanian agglutinative languages see A.Toth "Agglutinative languages". The developments that occurred in the intervening 100 years are noted in the body of the posting, these developments do not impact or diminish Isaac Taylor's scientific contribution.

While the classical Greek alphabet was being evolved in the Ionian cities of the Asiatic coast, numerous scripts, more or less closely related to the Greek, prevailed among the non-Hellenic races. Setting aside the Aramean of the Satrapies, which has been already discussed, it is possible to recognize five distinct alphabets  - the Lycian, the Carian, the Cappadocian, the Phrygian, and the Pamphylian; to which the Lydian,  the Mysian, and the Cilician may probably be added.

Some of these alphabets are simply archaic Greek; others appear to be unrelated either to the Greek or to the Phoenician, while the remainder contain both Hellenic and non-Hellenic elements....

... the non-Hellenic characters in the Lycian, Carian, and Cappadocian alphabets, as well as the Cypriote syllables, were all derived from a common sorce , a syllabic writing, evidently of immense antiquity, which prevailed throughout the whole of Asia Minor, and which has been designated by Professor Sayce as the Asianic syllabary....

... It must have been owing to the insulation of Cyprus that this primitive script lingered there down to historic times, elsewhere giving place to the Greek alphabet, which, however, incorporated certain signs from the older script...

... the Cypriote syllabary is of great interest as an example of an independent graphic system, unrelated to the Semitic alphabet...

... This conclusion agrees with all the other available evidence. Dr. Schliemann's whorls from Hissarlik tend to prove that at the time of the destruction of Troy the only graphic signs used in Mysia were the Asianic syllables, which may probably be identified with the σήματα λυγρά (semata ligura, "Semitic letters" - Translator's Note) of Homer (Il. vi. 168). As we shall presently see, the Asianic syllabary must have been employed throughout Asia Minor long before the arrival of the Phoenician colonists in the Aegean in the 12th century B.C. In the 7th century the Cypriote writing was already obolescent (i.e. becoming a dying whorl [adj.] - Translator's Note) in Cyprus, and yet the Cypriote syllabary was plainly only a late survival of the more comprehensive 1 and more archaic syllabary of Asia Minor....

... To complete the solution of the problem offered by the Asianic alphabets one step only was required. namely, the discovery of the source from which the Cypriote syllabary was itself obtained. It had no recognizable affinities with the graphic systems of the Greeks, the Phoenicians, the Egyptians, or the Assyrians, but the analogy of other scripts made it probable that it was the ultimate survival of some extremely ancient mode of picture-writing.... 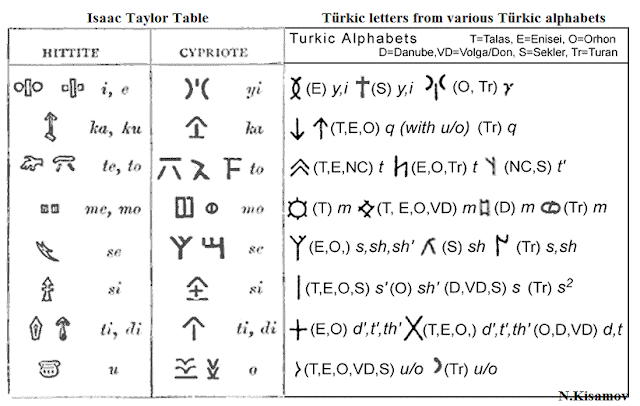 ... The recent discovery of the so-called "Hittite" hieroglyphs has cast a flood of fresh light upon the question. In 1871, Mr. Tyrwhitt Drake obtained copies of five inscriptions in an unknown hieroglyphic character from Hamath on the Orontes, and others of a similar nature have recently been excavated from a mound (kurgan) at Jerabis, on the upper Euphrates, which has been identified with the site of Carchemish, the northern capital of the Hittites. That their empire extended as far as the Euxine and the Aegean is shown by hieroglyphs and sculptures in the unmistakable style of Hittite art, which are scattered over Asia Minor, more especially in Lydia, Lycaonia, Cappadocia, and Cilicia.

These monuments are those of a people who have been identified with the Hittites (Khittim) of the Old Testament, the Kheta of the Egyptian monuments, the Khattai of the Assyrian records, and the Κητειοι of Homer (Od. xi. 521). They were one of the most powerful peoples of the primeval world, their empire extending from the frontier of Egypt to the shores of the Aegean, and, like the Babylonians and the Egyptians, they possessed a culture, an art, and a script peculiar to themselves, and plainly of indigenous origin....

... In the 12th century, when the Phoenicians advanced to the Aegean, the Hittite power had begun to decline, and by the time of Solomon their empire was broken up into separate kingdoms by internal divisions, and weakened by the encroachments of neighboring Semitic nations, and was finally brought to an end in 717 B.C. by the capture of Carchemish by the Assyrians under Sargon. Their speech was clearly neither Aryan nor Semitic, and seems to have belonged to the great Alarodian family which was spoken in Cilicia, Cappadocia, Lycaonia, and Armenia*, and whose nearest living representative is believed to be the language of the modern Georgians... (Translator's Note For update on Hatti and Hittite languages and script, refer to Hatti language (Russian text by I.M.Dunaevskaya and I.M.Diakonov) and Hittite language) -

[* geographic name, nothing to do with today's Armenian people, they came as Hay (or Hayk) in the 6th c BC, and was not powerfull at that time-SB]

[ from the link above: a) The Hattian character of the onomastics of the Kask, or Kashk tribe, which in the 2nd millennium BC occupied the north-eastern Asia Minor (area of Pontus abutting in the east to Colchis - G.G.Giorgadze);  ** - Hattian language was a aggl.lang., and Kask or Kashk tribe is the Alizon, Gargar, Kaşka tribe in some sources, which belongs to Scythian/Saka-Turks people. Do remember, that in the Caucasian geography lived/lives many Turkish speaking people (from BC-today). (Cimmerians, Scythians, Kipchaks, Huns, etc. even in the Georgian sources "Bun-Turk" (indigenous people-Turks) are to be seen. - SB] 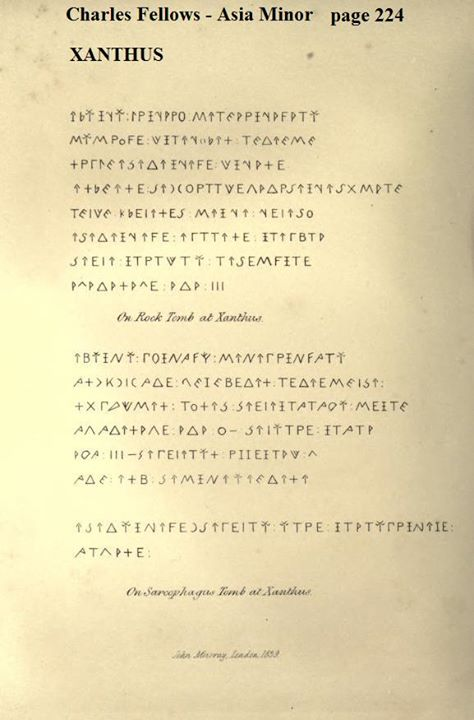 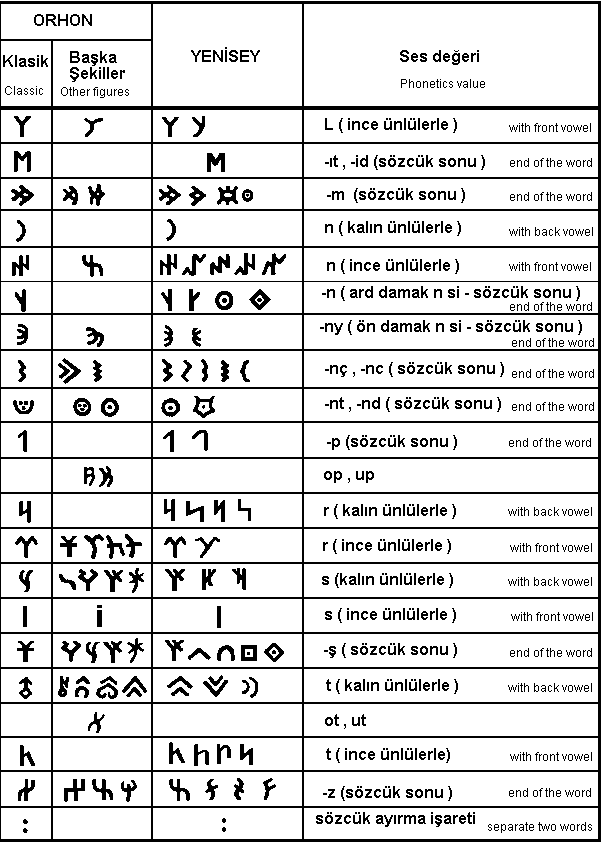 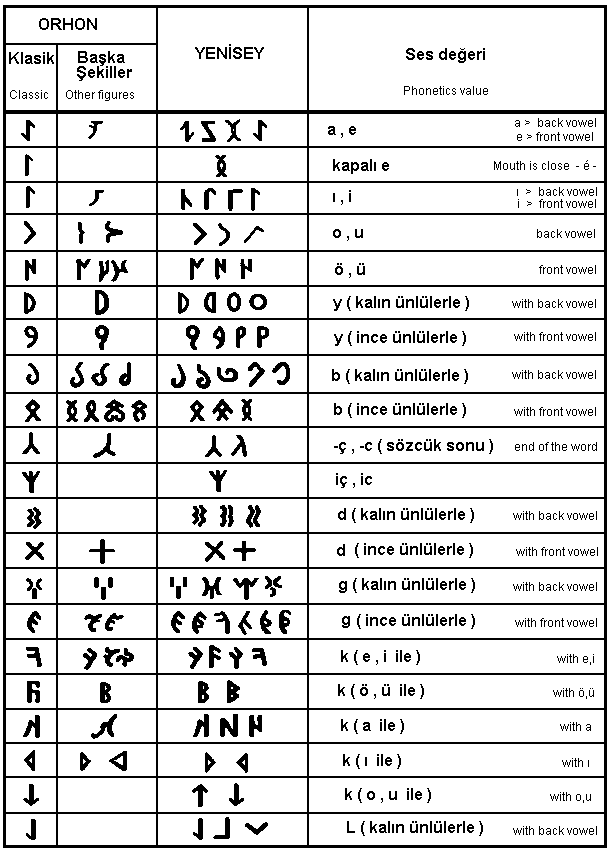 THE TURANİAN race is one of the oldes in the world and appears to have migrated at the same time as the Hamitic ; it might even be possible to restore the chief features of an epoch, when the sons of Turan and of Cush alone occupied the greater part of EUROPE and ASİA, whilst the Semites and the Arians had not yet left the regions
which were the cradle of our species.  (page 63)

F.LENORMANT
Comprising the history of the Israelites, Egyptians, Assyrians, and Babylonians

"The wonderfull system of writing, called from the shape of the characters, cuneiform , or wedge-shaped was invented by the orginal Turanian inhabitants of Babylonia"....page 16

"It is generally supposed that Babylonia was peopled in early times by Turanian tribes (tribes allied to the Turks and Tatars) and that these were conquered and dispossessed by the Semites"....page 34

GEORGE SMITH
Ancient History from the Monuments the History of Babylonia 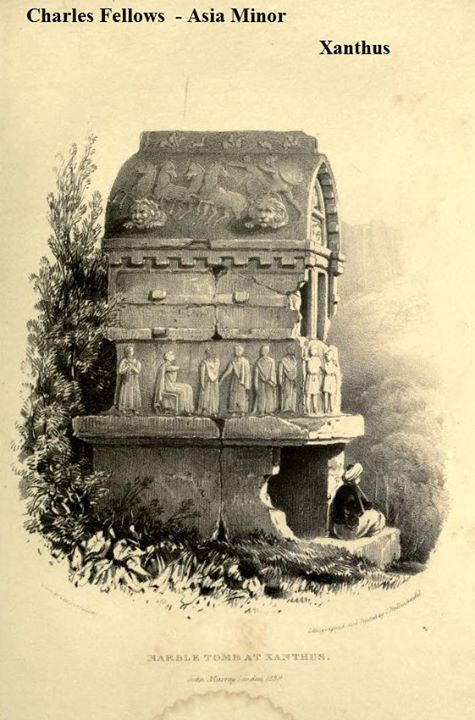