THE DIGGINGS IN ODEN'S HOWE, UPSALA 1846


These diggings were conducted by Riks Antiquary B.E.Hildebrand and Lieut-Colonel Stat, chiefly in the days of August-September 1846 and June 1847. The only printed notices thereon appeared at the time, chiefly from the pen of B.E.Hildebrand in the Upsala paper 'Correspondenten' Nos- 1846-1847

1. Correspondenten September 12-1846 -
Diggings going on but prove more laborious than had been expected.

2. Correspondenten September 1846 -
A boarded gallery 7 Swedish feet 5 inches high and 5 feet broad has been consturcted from the east side of the howe (Oden's Howe, the largest of the three so-called King-howes) towards the centre. After penetrating 68 feet (20 mt) a mighty wall of granite blocks was struck, probably a grave-chamber. During the digging have been found unburnt animal bones, bits of dark wood, charcoal, burnt bones, etc.Thus this was evidently a sepulchral mound. The name King-howes is evidently correct. Diggings have also been made in the smaller cairns near by, and although they have been opened before, burial-urns have been found, burnt human bones, bones of animals and birds, bits of iron and bronze,etc.

3. Correspondenten September 1846 -
The great wall has proved to be the edge of a mşghty chamber. Between 200 and 300 large granite blocks have been taken out. Some of them have traces of tooling. The gallery has been carried 16 Swedish feet through the stone mass, which lies on hard packed clay, over a layer of fine sand, resting on large stones above the natural soil. At the middle of the howe the grave-chamber is 9 feet above the level of the soil, 18 feet under the top of the howe. On the bed of clay under the great stones have been found an iron clinker 3 inches long, remains of pine poles partly burnt, a lock of hair chestnut coloured, etc. The numerous clusters of charcoal show that the dead had been burned on the layer of clay, and the bones have been collected in an urn not yet found. In oner of the neares samll howes have been found a quantity of burnt animal and human bones, two little-injured bronze brooches, a fragment of a golden ornament, etc.

4. Correspondenten June 23 1847 -
The burial-urn has been found in the grave-chamber. Also have turned up bones of men, HORSES, dogs, a golden ornament delicately worked, a bone comb, bone buttons...

5. Correspondenten July 3 1847 -
The gallery has been dreiven 4 feet farther, thereafter has been made a side gallery, 8,5 feet wide and 8 feet long, up to the burial-urn. This was found 3 inches under the soil, and was covered with a thin slab. It was 7 inches high 9 inches in diameter, filled with burnt bones, human and animal (horse, dog,etc.) ashes, charcoal (of needle and leaf trees), nails, copper ornaments, bone articles, a bird of bone.etc. In the mass of charcoal about were found bones, broken ornaments, bits of two golden bracteates,ets. Coins of King Oscar were then placed in the urn, and everything restored as before.

In a smaller barrow close by were found fragments of a coarse, dark-coloured urn, a flint arrow-head, a samll piece of iron, part of a bridle-bit, and several horses' teeth ; ....
page 12

It was surrounded by a circle of great stones, within which was the cairn, originally, probably, 40 or 50 feet high. All this has been removed to such an extent as to expose the kistvaen or dolmen in its centre. Its cap stone is 10 feet square and 2 feet thick, and is of limestone, as are its supports.

All the other monuments are composed of granite boulders. "Those who first opened it assert that they found nothing within but burnt wood and human bones. The half-calcined bones of horses and other animals were and are still found in this cairn in great quantities"....
page 182

To return, however to King Hildetand. According to the saga, "After the battle the conqueror, Sigurd Ring, caused a search to be made for the body of his uncle. The body when found was washed and placed in the chaiot in which Harald had fought, and transported into the interior of a tumulus which Sigurd had caused to be raised. Harald's horse was then killed and buried in the mond with the saddle of Ring, so that the king might at pleasure proceed to Walhalla either in his chariot or on horseback. Ring then gave a great funeral feast, and invited all the nobles and warriors present to throw into the mound great rings and noble armour in honour of the king Harald. They then closed up the mound with care."

One of them is described by Mr.Feraud as surrounded by a circular enceinte, 12 metres, nearly 40 feet ,n diameter. The chamber of the dolmen measured 7 feet by 3 feet 6 inches. At the feet of the skeleton were the bones and teeth of a horse, and an iron bridle-bit.....
page 404

In one tomb known as Kouloba, or Hill of Cinders, were found the remains of a chief, with his wife, their servants, and a horse. He wore a cap ornamented with gold, a gold enamelled necklace, and gold bracelets, and his sword was of iron.....
page 446

DATA ON HORSE BURIALS ARE MORE SCANTY , BECAUSE THEIR REMAINS WERE NOT ALWAYS COLLECTED. AND SOMETIMES WERE NOT EVEN MENTIONED IN THE RECORD OF EXCAVATIONS....!!!

The converging genetic dating allowed to trace genetic markers in space and time, and draw observations about their migration, spread, and timing. According to Klyosov 2010, “The modern Uigurs, Kazakhs, Bashkirs, and some other peoples of Siberia, Central Asia and the Urals descend in part from the ancient R1b1 branch, and by now retain the same haplogroup for 16,000 years.

According to the archeological evidence systemized by M. Gimbutas (!), 1994, Europe also experienced three major Kurgan overland migration waves, some of them were repeat migrations into the same areas.


The dating of the Kurgan migration waves, produced by archeologists using radiocarbon analysis, is in concert with the genetical dating: wave 1 at c. 4400-4300 BC, wave 2 at c. 3500 BC or somewhat later, and wave 3 soon after 3000 BC; the circum-Mediterranean Celtic Kurgan wave reached Europe independently at 2800 BC.

Along its route, the circum-Mediterranean wave remains archeologically unexplored. It is reasonably expected that the waves, separated by the timespans on the order of millenniums, were likely composed of linguistically differing tribes of the same linguistic family but complemented by different allies, were impacted by the specifics of their migration routes and their durations, and were bringing to the new territories their particularly distinct vernaculars.

Although belonging to the same nomadic horse-breeding Kurgan historical-cultural complex, they possessed different technologies, starting with the Neolithic, and ending with the metals.


The concept of the Türkic substrate does all of the above. In addition, it supports the existence of genetical connection between the Futhark alphabet and the Türkic alphabets, although its mechanism is yet to be analyzed, it demonstrates the common Türkic origin of the Latin and English linguistic building blocks, and it reflects the known development of the English language.

The Türkic substrate concept is based on the accumulated knowledge on the movement of the Kurgan people in the pre-historical and historical times, it is consistent with the findings of the archeology, genetics, and historical records. Moreover, it corroborates their findings, adding the linguistic aspect to the body of multi-discipline evidence.

Composed in the 20th c. and widely popularized mantra on the Iranian-linguality of the Scythian and Sarmatian Kurgans (Scytho-Iranian Theory) stubbornly remained unsupported by the contiguous disciplines, including linguistics, it remained infertile in its insights, and conflicted with the historical records.

Reverting back to the 2000-years old original concept of the Türkic-linguality of the Scythian and Sarmatian Kurgans restores concordance with the historical records, harmonizes the linguistic aspect with the other disciplines, allows a better understanding of the historical developments, and serves as a productive base for understanding of the substrate languages across Europe. By pinning down the Türkic portion of the substrate, it allows a deeper insight into the heritage from the times preceding the Kurgan waves.

((! - "Nothing can prove more clearly the Turanian origin of the Etruscans than the fact that all we know of them is derived from their TOMBS" - James Fergusson, A History of architecture in all countries, J.Murray, 1865 ,p.257

The people with the kurgan culture were Altaic-speaking (and partly turcica) and not Indo-European as so far recorded (ex. from Lithuanian archaeologist Marija Gimbutas Baltic nationalist ideology-SOAKED!)." -  Prof.Mario Alinei))

The Kurgan people culture existed during the fifth, fourth, and third millennia BC, they lived in northern Europe, from N.Pontic across Central Europe.  The word "kurgan" means a mound or a barrow in Türkic. Kurgan culture is characterized by pit-graves or barrows, a particular method of burial. They are also called the Pit-grave people (Pit-grave culture), or Barrow people (Barrow culture).
The earliest Kurgan sites of the fifth, fourth, and third millennia BC are in the N.Pontic, from where they spread by about 2000 BC to Central Europe, crossing the Dnieper River. Wherever Kurgan culture spread, it was marked by common elements unlike those of the surrounding Bronze-Age cultures.

Fourth millennia BC: Kurgan peoples had spread across the entire area north of the Black Sea, across northern Europe, and probably east to the natural barrier of the Ural Mountains. In the Caucasus area, they enjoyed a primitive metal culture. When the portable archeological objects, like ornaments, weaponry and other objects more often used in exchanges, are combined with ceramics, and all this is supported by a similarity in the funeral ceremony, the most permanent ethnic attribute, then the ethnic movement is sufficiently proved. This is the case observed in the migration of the Kurgan (Pit Grave) carriers cultures ( Miziev, 1990, p. 18).

- results in a conclusion that genetically these elements go back to the Pit Grave culture, Andronovo, Timber Grave and Scythian tribes. Stated differently, there are all reasons to consider the Pit Grave, or Kurgan culture a basis for the formation of the ethno-cultural features for the most ancient pra-Türkic tribes of the Euro-Asian  steppes. 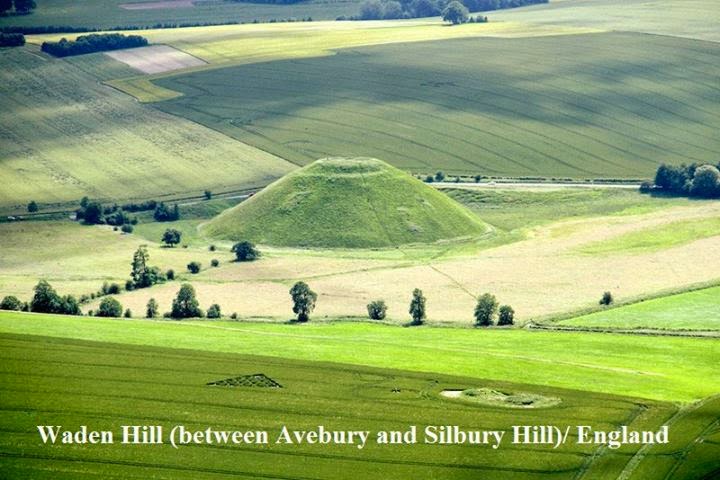 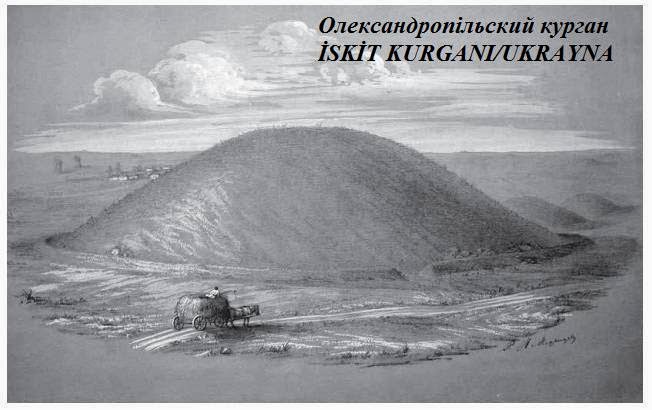 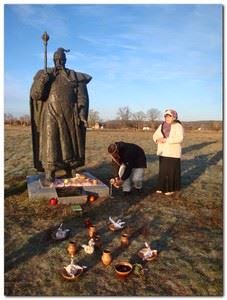