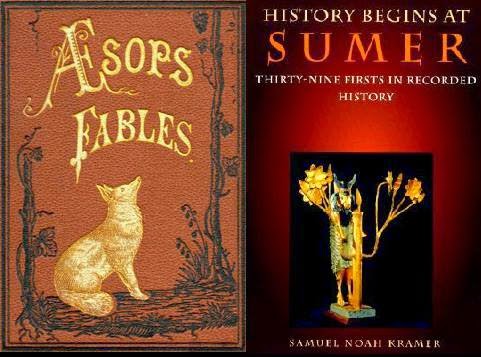 Among the Greeks and Romans, the invention of the literary genre of animal fables was ascribed to Aesop, who lived in Asia Minor during the sixth century B.C.

Today, however, it is well known that at least some of the fables attributed to Aesop were already in existence long before Aesop.

In any case the animal fable of the "Aesopic" type is found in Sumer more than a millennium before Aesop was born.


The Sumerians were a non-Semitic, non-Indo-European people
who lived in southern Babylonia from 4000-3000 B.C.E.
S.N.Kramer - History Begins at Sumer/pdf

The study of myths , or "sayings". The myth has a natural origin
in the belief that every natural object has a life or soul
and in the imperfect language of early man.

The first poets who described nature did not use similes.
They said the cloud was a bellowing bull and not that the thunder
in the cloud bellowed like a bull.
The meanings of the myths, when fairly clear,
are explained in special articles on the various legends.

Turanian and Semitic races have myths as well as Aryans ,
and the Greeks BORROWED many of theirs from
Akkadians, Hittites, Babylonians and Phoenicians....


Sumerian Mythology is much older than the
Greek (Hellenes) Mythology