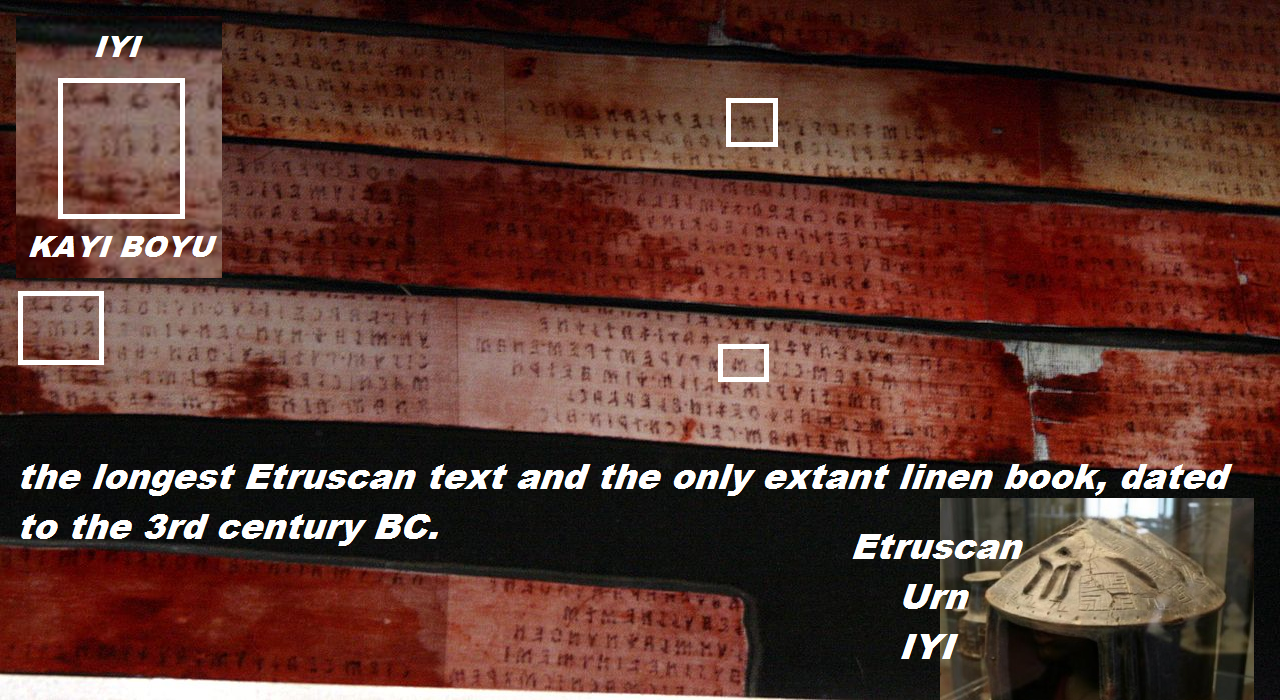 Brief description. Found at the end of 19 c., it contains about 1130 words written by almost faded red pigment on the bandage of a mummy of a young girl from Upper Egypt. Dated 3rd c. BC, it is kept in a glass box in the Zagreb Archeological museum.

Intent of the inscription is to preserve for the descendants a main ritual of Etruscan religion, human sacrifice.

I'm not a linguistic, still, I can see it

...Now it is utterly out o the question that the Etruscans can have been a colony of Negroes, or Hottentots or Sourth Sea Islanders or Mexicans or Peruvians or Red Indians. The portraits in their tombs to say nothing of geographical considerations are enough to dispose of any such hypothesis.

I - The Aryan or Indo-Europeen languages, such as Sanskrit,Persian,Greek,Latin,German,Russian or Welsh.

II - The Semitic languages, such as Poenician, Hebrew, Arabic and Assyrian.

Thus the problem reduces itself to this simple question, In which of the three great families of speech - Aryan,Semitic or Turanian, are there any decades resembling this Etruscan decade ?
Are there any languages in which l-ch-l- or any equivalent root is used as a decadel suffix?

The Aryan and the Semitic languages are at once put out of court. The claims of Hebrew, Arabic, Poenician, Coptic, Celtic, OScan, Umbrian, Latin, Greek, Gothic and Sclavonic all of which have been urge bu learned men in learned books, disappear before this simple test. In none of them do the decades end in l-k-l.

The Turanian languages are left. If they do not satisfy our test , The Etruscan language must as some have thought, stand apart, solitary and kinless among all the known languages of the earth ; a single shattered peak as it were, emerging out of the deluge which has overhelmed the linguistic world to which it formerly belonged.

Fortunately however our test is satisfied by the North Turanian, Altaic or Finno-Turkic family of speech , a class which includes the languages of the Lapps, Finns, Magyars, Turks, Tatars, Mongols and Samoyedes.

Agglutinative.
Verbs come at the end of the sentence.
No gender.
Vowel harmony.
LİNK