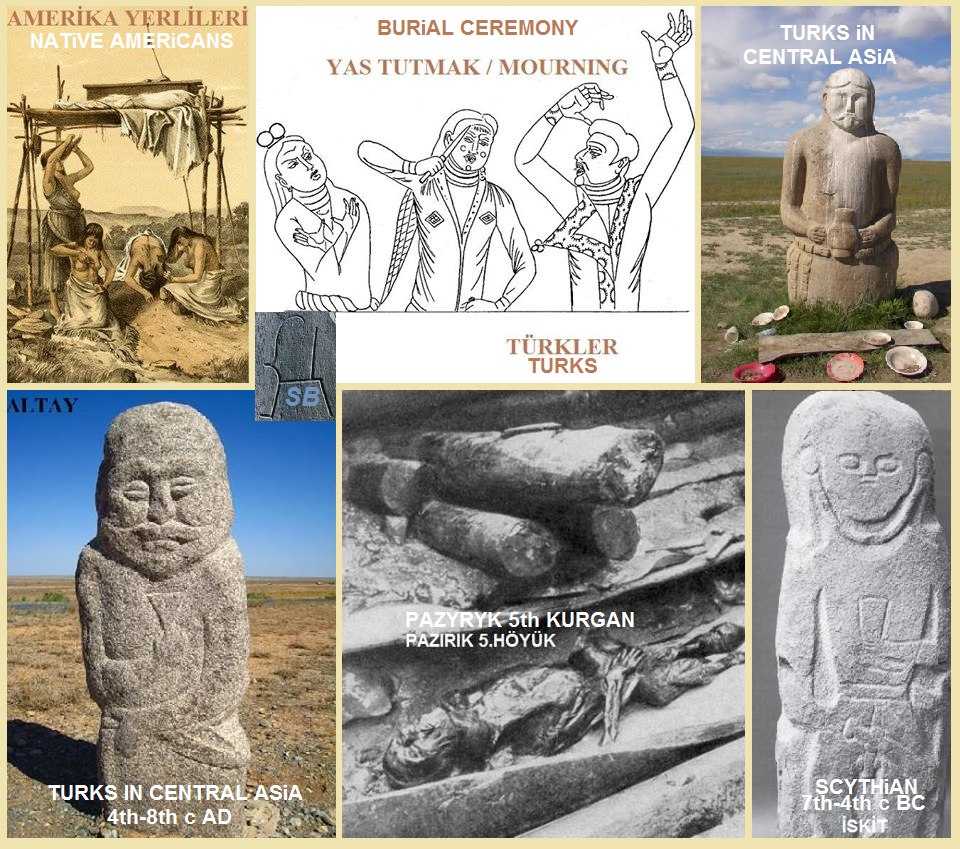 The tombs of their kings are in the land of the Gerrhi, who dwell at the point where the Borysthenes is first navigable. Here, when the king dies, they dig a grave, which is square in shape, and of great size.

When it is ready, they take the king's corpse, and, having opened the belly, and cleaned out the inside, fill the cavity with a preparation of chopped cypress, frankincense, parsley-seed, and anise-seed, after which they sew up the opening, enclose the body in wax, and, placing it on a waggon, carry it about through all the different tribes.

On this procession each tribe, when it receives the corpse, imitates the example which is first set by the Royal Scythians; every man chops off a piece of his ear, crops his hair close, and makes a cut all round his arm, lacerates his forehead and his nose, and thrusts an arrow through his left hand.

Then they who have the care of the corpse carry it with them to another of the tribes which are under the Scythian rule, followed by those whom they first visited.

On completing the circuit of all the tribes under their sway, they find themselves in the country of the Gerrhi, who are the most remote of all, and so they come to the tombs of the kings. There the body of the dead king is laid in the grave prepared for it, stretched upon a mattress; spears are fixed in the ground on either side of the corpse, and beams stretched across above it to form a roof, which is covered with a thatching of osier twigs.

In the open space around the body of the king they bury one of his concubines, first killing her by strangling, and also his cup-bearer, his cook, his groom, his lacquey, his messenger, some of his horses, firstlings of all his other possessions, and some golden cups; for they use neither silver nor brass. After this they set to work, and raise a vast mound above the grave, all of them vying with each other and seeking to make it as tall as possible.

When a year is gone by, further ceremonies take place. Fifty of the best of the late king's attendants are taken, all native Scythians - for, as bought slaves are unknown in the country, the Scythian kings choose any of their subjects that they like, to wait on them - fifty of these are taken and strangled, with fifty of the most beautiful horses. When they are dead, their bowels are taken out, and the cavity cleaned, filled full of chaff, and straightway sewn up again. This done, a number of posts are driven into the ground, in sets of two pairs each, and on every pair half the felly of a wheel is placed archwise; then strong stakes are run lengthways through the bodies of the horses from tail to neck, and they are mounted up upon the fellies, so that the felly in front supports the shoulders of the horse, while that behind sustains the belly and quarters, the legs dangling in mid-air; each horse is furnished with a bit and bridle, which latter is stretched out in front of the horse, and fastened to a peg. The fifty strangled youths are then mounted severally on the fifty horses. To effect this, a second stake is passed through their bodies along the course of the spine to the neck; the lower end of which projects from the body, and is fixed into a socket, made in the stake that runs lengthwise down the horse. The fifty riders are thus ranged in a circle round the tomb, and so left.

Such, then, is the mode in which the kings are buried: as for the people, when any one dies, his nearest of kin lay him upon a waggon and take him round to all his friends in succession: each receives them in turn and entertains them with a banquet, whereat the dead man is served with a portion of all that is set before the others; this is done for forty days, at the end of which time the burial takes place.

He describes mourning for a chief from Transoxiana:
“His Turks cut off their ears, becoming the worst of those with bowed heads, weeping.”

His mourning is described in a similar way:
“They cut their ears and tore the skin on their faces and began weeping over him.”


Early Turks: Male Costume in the Chinese Art Second half of the 6th – first half of the 8th cc
Prof.Sergey A. Yatsenko - link


IMAGES OF THE EARLY TURKS IN CHINESE MURALS AND FIGURINES FROM THE RECENTLY-DISCOVERED TOMB IN MONGOLIA
Prof.Sergey A. Yatsenko - link
Russian State University for the Humanities, Moscow

"Supplying food to the dead is a custom which is known to be of great antiquity; Many of the tribes of North American Indians followed these customs. The cutting of hair as a mourning observance is of very great antiquity, and Tegg relates that among the ancients whole cities and countries were shaved (sic) when a great man died....."

In Turkish bringing food for the dead, we call;
"ölü aşı" "dead meal".

"When Attila died, the Huns "as it the custom of that race, cut off a part of their hair and disfigured their faces horribly with deep wounds, so that the gallant warrior should be mourned not with the lamentations and tears of women, but with the blood of men."

Sidonius had the Huns in mind when he wrote about the peoples " to whom wailing means selfwounding and tearing the cheeks with iron and gouging the red traces of scars on the threatening face."

a line in Kalidasa's Raghuvamsa alludes to the same custom among the Huna on the Oxus: " The exploits of Raghu, whose valof expressed itself among the husbands of the Huna women, became manifest in the scarlet color of their cheeks".

Slashing or scrating the face as an expression of mourning was so widespread that only a few parallels to the Hunnic custom need to be adduced: The Kutriger cut their cheeks with daggers, the Turks cut off their hair and slashed their ears and cheeks; so did the Magyars and Slavs; on a wall painting in Pandzhikent patterned on Parinirvana scenes, the mournes are shown cutting their cheeks with knives. Until quite recently the custom was observed by Serbs and Albanians, and in some regions in Tadjikistan. The lines on a gold mask found at the Shami Pass in the Chu Valley, datable to the Fourth or fifth century, might represent scars.

The Getica account of Attila's obsequies, going back to Priscus, reads:

His body was place in the midst of a plain and laid in state in a silken tnet as a sight for men's admiration. The best horsemen of the entire tribe of the huns rode around in circles, after the manner of circus games, in the place to which he had been brought and told of his deeds in a funeral dirge in the following manner:

Here lies Attila, the great king of the Huns.
the son of Mundzucus
the ruler of the most courageous tribes;
enjoying such power as had been unheard of before him
he possesed the Scythian and Germanic kingdoms alone
and alos terrorized both empires of the Roman world
after conquering their cities and
placated by their entreaties
that the rest might not be laid open to plunder
he accepted an annual tribute
After he had achieved all this with great success
he died not of an enemy's wound, not betrayed by friends
in the midst of his unscathed people
happy and gay
without any feeling of pain
Who therefore would think that this was death
which nobody considers to demand revenge?

The world of the Huns: Maenchen-Helfen
* "The Kutrigur cut their cheeks with daggers" ; - Agathias
* "The Turks cut off their hair and slashed their ears and cheeks" ;  Menander "Protector" the Memorial to Bilge qaghan, Malov 1959 (Bilge Kagan)
* "so did the Magyars" - Liutprand


"Socio-cultural history: Those who not take a attention on social memory history, ie social DNA,
have to explain how and why they appear in Turkish cultural geography."
Dr.Mustafa Aksoy

Huns=Turks=Scythians coming from the same family
And Magyars are cousin of Turks.