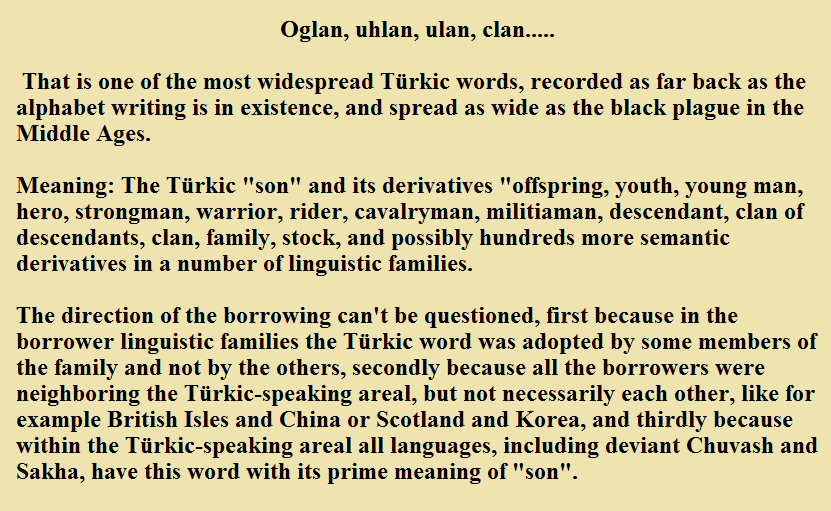 That is one of the most widespread Türkic words, recorded as far back as the alphabet writing is in existence, and spread as wide as the black plague in the Middle Ages.

The direction of the borrowing can't be questioned, first because in the borrower linguistic families the Türkic word was adopted by some members of the family and not by the others, secondly because all the borrowers were neighboring the Türkic-speaking areal, but not necessarily each other, like for example British Isles and China or Scotland and Korea, and thirdly because within the Türkic-speaking areal all languages, including deviant Chuvash and Sakha, have this word with its prime meaning of "son".


1 n. - One of a certain description of militia among the Tatars.

2 n. - One of a kind of light cavalry of Tataric origin, first introduced into European armies in Poland. They are armed with lances, pistols, and sabers, and are employed chiefly as skirmishers 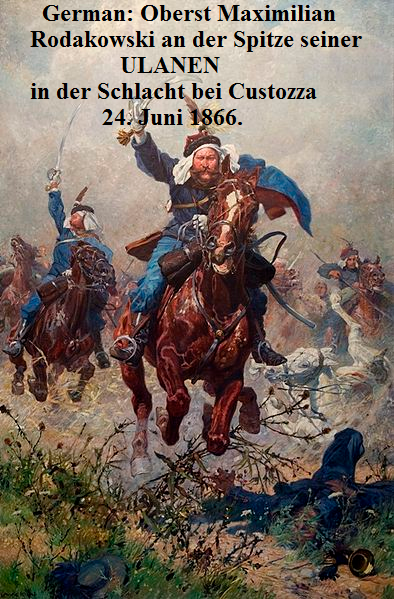 
4 n - c.1425, from Gael. clann "family, stock, offspring," akin to O.Ir. cland "offspring, tribe," both from L. (Smile, you are on Candid Camera!) planta "offshoot." Gaelic (Goidelic) Celtic had no initial p-, so it substituted k- or c- for L. p-. Clannish is first attested 1776. (The real Türkic source, or at least the Etruscan borrowing is not mentioned out of sheer modesty, or not to burden the tired reader with superfluous details, I guess)

5 n - A traditional social unit in the Scottish Highlands, consisting of a number of families claiming a common ancestor and following the same hereditary chieftain.

6 n - A division of a tribe tracing descent from a common ancestor.

7 n - A large group of relatives, friends, or associates.

8.1 - Mounted soldier in tight clothes of special cut, with a spear with a badge or banner

8.2 - Lower commander of ten men, in mines or ore factories


The Celtic oglach is interpreted as the combination of og («young») and the suffix lach, forming abstract nouns .


The Turkic oghlak is known to be a derivative of the same ogho, ogh («young») and the noun forming suffix –lak in Turkic languages .


The element ogho, as an independent noun, has survived in the Yakut language in the words «young», «child». That language is known to be one of the old Turkic languages keeping old elements.