The West use Greek and the Greeks use Hellene

In 800 AD Holy Roman-German was built, Charlemagne was crowned as Roman Emperor, officially rejecting the Eastern Roman Empire as true Romans. But the emperor in Constantinople says " the owner of this title is me".

At this point Charlemagne use the word Greek, in 200 BC. when the Romans take over the land Greece, they called them "Greek", meaning "Slaves" " Servants" ... So they began to use "Greek" for the East Romans.

So the West claims that as his legal heir and the emperor was known as "Imperium Romanum" and the East as "Emperor of the Greeks" and their land as "Greek Empire" "Imperium Grecorum."

This "Slave" meaning was in the old edition of the books, but Greece went to court, and new editions doesn't have this meaning anymore. 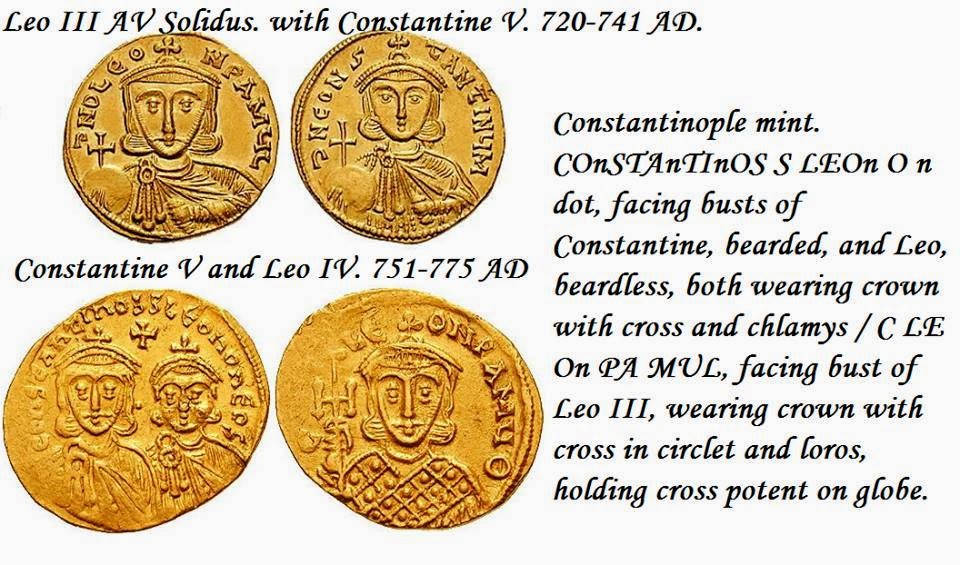 THE EAST ROMAN EMPIRE AND THE TURKS

*Theodora of Khazaria was the second Empress consort of Justinian II (669-711) of the Byzantine Empire. She was a sister of Busir, Khagan of Khazars .

Theodora and Justinian II had only one known child:
Tiberios (c. 705 – 711, co-emperor from 706 to 711 - Birthplace Khazaria). Executed by orders of Philippikos. He was murdered by the patrikios Mauros and John Strouthos, and buried in the Church of the Holy Unmercenaries.

* Leo III obtained the hand of a Khazar princess for Constantine V in 732...

Leo IV the Khazar was Byzantine Emperor from 775 to 780 AD.
Leo was the son of Emperor Constantine V by his first wife, Irene of Khazaria (Tzitzak - Çiçek), the daughter of a Khagan of the Khazars.

That's only 2 of them , The Turks sitting on the East Roman Empire throne.... (Byzantium was not the Empire name till the 17th century!)


"The Khazars were a Turkic people who originated in Central Asia. The early Turkic tribes were quite diverse, although it is believed that reddish hair was predominant among them prior to the Mongol conquests. In the beginning, the Khazars believed in Tengri shamanism, spoke a Turkic language, and were nomadic. Later, the Khazars adopted Judaism, Islam, and Christianity, learned Hebrew and Slavic, and became settled in cities and towns thruout the north Caucasus and Ukraine. The Khazars had a great history of ethnic independence extending approximately 800 years from the 5th to the 13th century."

In East Roman eyes the gift of Christiantity which they brought offered at the same time an introduction to a more highly developed way of life. Thus their converts integrated into the civilized oecumene and Byzantine statecraft and culture were introduced to young and vigorous societies who were able to combine what they had learnt from East Rome with their own native originality.

From the seventh century onwards the loss of Egypt and Syria to the Muslims and the failure to convert them and to bring them within the Byzantine orbit made it all the more vital to have some measure of understanding first with the Turkic peoples already established to the north-east of the Black Sea in the northern Caucasus and then with the Bulgars and Slavs settling in the Balkans. Already before the seventh century there were long-established links with the Crimea.

As early as 325 there was a bishop of Bosphorus in the peninsula where the Goths were living. From this base contacts were made with the Hunnic-Turkic migrants in the area between the Danube and the Caucasus.

Justinian I had won over the Lazi in the eastern Black Sea region. Likewise by the seventh century Abasgia was an ecclesiastical province. Thus Byzantium had established a foothold in the Caucasus.

The Alans in the north-eastern Caucasus appear to have known Christianity early on, but evidence is scanty as to how they fared. By the late ninth century they were known to have renewed contacts under Patriarch Nicholas Mysticus and by the early tenth century a bishop travelled thence, though with some reluctance. Episcopal lists and archaeological finds suggest that missionary work was also active north of the Black Sea among the Turkic Bulgars, some of whom were to migrate to the Balkans when the Khazar expansion took place in the late seventh century.

This work appeared to be done by non-resident missionary bishops as befitted those toiling among semi-nomadic peoples.

Thus both the Bulgars settling in Bulgaria and the Magyars in Hungary would already have met Christianity and some of them would have been converted.

This work included the powerful Khazar kingdom which by the eight century was established to the north-east of the Black Sea, Khazaria was particularly important to Byzantium both for economic reasons (trade routes into Asia) and as a barrier to any Arab advance through the Caucasus to the north. Justinian II who took refuge in Khazaria during his exile, and Constantine V, son of the Emperor Leo III, both married Khazar princess.

Byzantium may at the time have had hopes of cenverting Khazaria and the Crimea had already proved itself an obvious base for work in this area. But any permanent development of this kind was halted by successful Jewish activities from the eigth century onwards and by the Khazar adoption of full Judaism in the course of the ninth century.

The Orthodox Church in the Byzantine Empire by J. M. Hussey

"He dispatched Sarbaros and the remainder of his army against Constantinople so that, with the Huns of the west (whom they call Avars), Bulgars, Sklavinians and Gepids....."

"In that country he parleyed with the Turks of the east (whom they call Khazars) and called on them for an alliance."

page 316
The Chronicle of Theophanes


AVARS,   HUNS, BULGARIANS , KHAZARS AND
SCYTHIANS and CRIMEA
THE TURKS.