Costume of the Asiatics 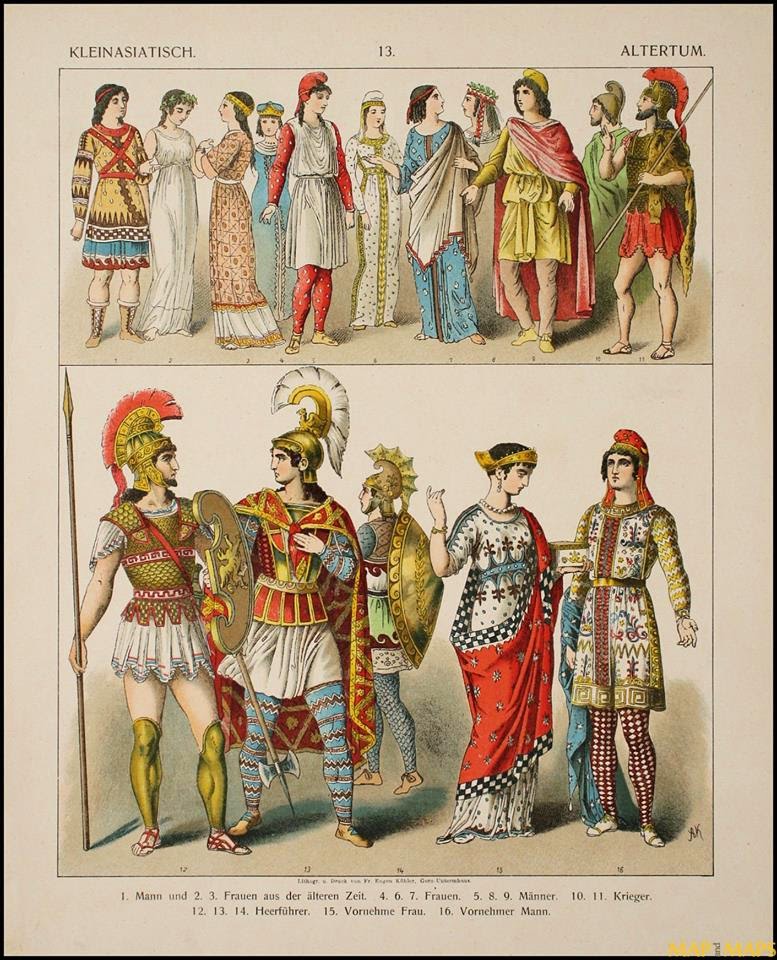 ...to offer a few observations with regard to those less distant inhabitants of Asia, who under the name of Medes, Assyrians, Persians, Partians, Amazons, Phrygians, Lycians and Syrians, though a rece totally distinct from the Greeks, had with these European neighbours some intercourse; and whose representations not unfrequently recur in their paintings and sculpture.

Of the male attire of the different nations inhabiting the region now called Asia Minor, the prevailing features seem to have been a vest with long tight sleeves reaching down to the wrists; and long pantaloons descending to the ancles, nay often hanging over the instep and losing themselves within side the shoes or sandals.

These pantaloons even clothe those masculine ladies the Amazons, whenever they are represented on some warlike expedition ; though at other times, when at home and engaged in peaceful pursuits, they appear in petticoats like other females.

Sometimes these pantaloons were made of the skins of animals ; at others of rich and fine tissues embroidered or painted in sprigs, spots, stripes, cheques, zig-zags, lozenges, or other ornaments.

Sometimes they fit tight, at others they hang loose and fall in large wrinkles over the shoes. The vest, always of the same stuff and design with the pantaloons, seems like our modern waistcoats, to have opened in front; and to have been closed by means of claps or buttons placed at considerable distances from each other.

Over this vest was most frequently worn a wide sleeveless tunic of a different texture and pattern; clasped on the shoulders, confined by a girdle round the waist, and when long, gathered up a second time, by means of another ligature lower down; and of this tunic the skirts reached to about the middle of the thigh.

To this thus far light and airy dress, aged and dignified persons still added a mantle or peplum, different from that of the Greeks, in being edged found with a regular and distinct fringe, not interwoven with the body of the stuff, but purposely tacked on; and which studied enrichment never observable in Grecian dresses, is in fact represented by eschylus as a characteristic peculiarity of the peplum of the barbarians, or Asiatic nations.

The Partians, and other more inland sovereigns of Asia, are sometimes though seldom represented on their coins bareheaded; with their long hair and bushy beards most finically dressed and curled. Often they wear a cylindrical cap, rather wider at the top than at the bottom, called mitra by the Greeks, sometimes encircled by a diadem, and at others loaded with different emblematic ornaments; the shape of which cap is to this day preserved in that of the Armenian priests.

The Medes and Persians seem more generally to have worn the cidaris, or conical cap, sometimes terminating in a sharp point; at others truncated, and mostly loaded with ornaments. The prevailing male head-dress of the Asiatics bordering on the Euxine and the Archipelago appears to have been that which is generally known by the name of the Phrygian bonnet, and of which the characteristic features are its point or top bent down forward , and its long flaps descending on the shoulders.

Sometimes this covering seems to have been a mere cap of the most soft and pliant stuff, unable to support itself upright, and hanging down in large wrinkles; at others it appears to have formed a helmet of the most hard and inflexible substance-of leather or even of metal-standing quite stiff and smotth and enriched with embossed ornaments.

In many of these helmets the flaps descending on the shoulders are four in number and probably were cut out of the legs of the animals, whose hide or skin formed the body of the cap. In most of the lighter caps we only discern one single pair of flaps, which are often tucked up, and confined by a string round the crown.

In the figures of Amazons we often see the beak of the helmet terminate in the bill of a griffin and its spine or back rise in the jagged crest of that fabulous animal; under which shape this covering may be considered as a sort of trophy, worn in consequence of the defeat and formed out of the very spoil of some griffin, with whom the Amazons are represented as constantly at war.

Minerva herself sometimes appears in a Phrygian helmet of this species, probably when represented as worshipped at Troy ; and Roma likewise wears it on many Latin coins; in oreder, no doubt, to indicate the kindred which the Romans claimed with the Trojans.

This Phrygian bonnet seems to have been retained by many of the officers of the Byzantine emperors; and to have been in its turn again borrowed from these by several of the dignitaries of the Turkish empire; nay to have travelled, during the intercourse of the Venetians with the Greeks, as far westward as Venice itself, where the Doge continued to wear it, to the last day of his power.

The Asiatics often wore half-boots laced before with four long depending flaps, shaped like those of their bonnets; and like those probably formed out of the legs of the animals, whose skins were converted into these buskins. Frequently eastern personages appear in shoes or slippers; and seldom if ever, in mere sandals, leaving the toes bare, like those worn by the Greeks.

In war the Asiatics seem never like the Greeks, to have worn either breast plates or greaves, but frequently a coat or jacket with sleeves, entirely of mail. A flap of mail frequently descended from under the helmet, to protect the neck and shoulders.

The chief defensive weapon of the Asiatics was the pelta or small shield in the form of a crescent; sometimes with and sometimes without its curved side divided by a point into twin concavities. The peculiar offensive weapons of the inhabitants of Asia were the bipennis, or double battle-axe, the club, and the bow and arrow, generally carried in two different partitions of the same case or quiver.

The Dacians, though inhabitants of the European shores of the Euxine, but near neighbours to, and probably of the same origin with the Asiatic nations here mentioned, seem to have deviated little from them in their costume. They wore their shoes or soles fastened with long strings, wound several times round the ancle; and their pantaloons very wide.

On the Trajan column not only many of the Dacian soldiers themselves, but even many of their horses, appear entirely enveloped in a coat of mail, or covering of small scales, tightly fitting the limbs. Their helmets are conical, and end in a sharp spike.

Many of the Asiatic nations were celebrated fro their constant use and skilful management of horses; and are often represented as fighting on horseback against Greeks on foot.


Costume of the Ancients vol I / Thomas HOPE
pdf: 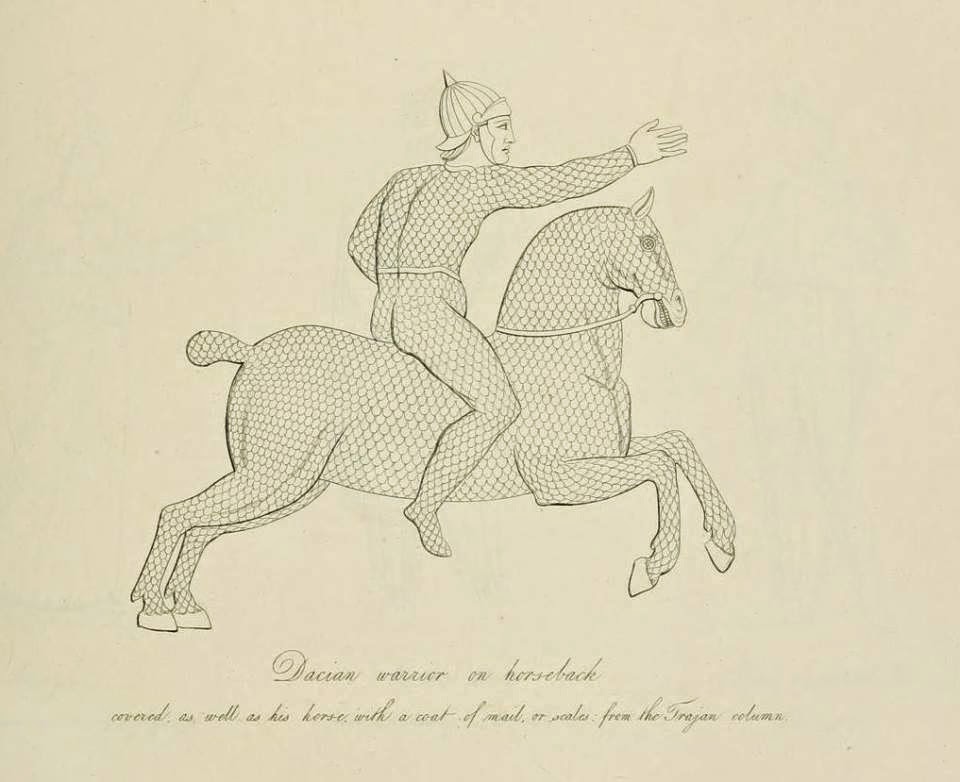 in Greece:
In one place women who had no husbands, whether virgins or widows, were strictly looked after- especially the virgins, as being less experienced-and they were rarely permitted to appear in public or converse with men ; and when allowed that liberty, wore over their faces a veil, and which was not left off in public till the third day after marriage.

in Laconia the Lacedaemonian or Spartan:
Women observed fashions quite different from all their neighbours; their virgins went abroad bare-faced, the married women were covered with veils; the former designing (as Charilaus repied to one that inquired the reason of that custom) to get themselves husbands, whereas the latter aimed at nothing more than keeping those they already had....

The Lydians were originally a hardy and warlike people, who wore scanty costume. When they revolted , Croesus advised Cyrus to pardon them " and enjoin them to keep no weapons of war in their possession; and enjoin them to wear tunics under their cloaks, and buskins on their feet; and require them to teach their sons to play on the cithara, to strike the guitar, and to sell by retail; and then you will see them becoming women instead of men, so that they will never give you any apprehensions about their revolting." 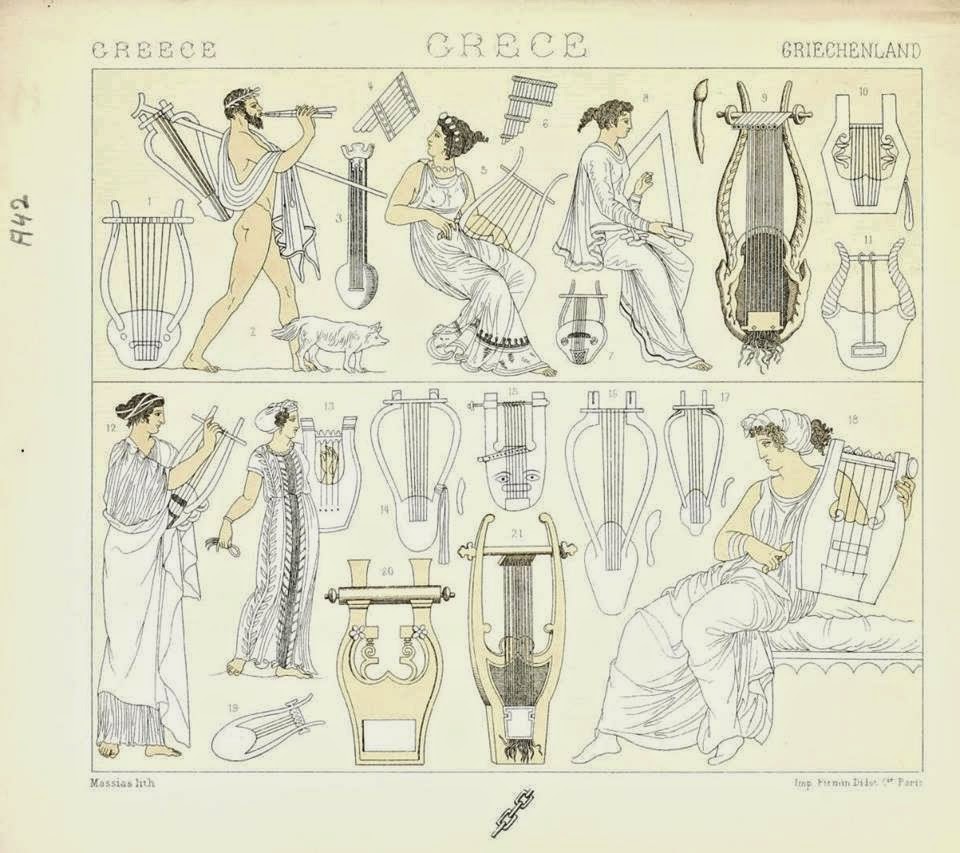 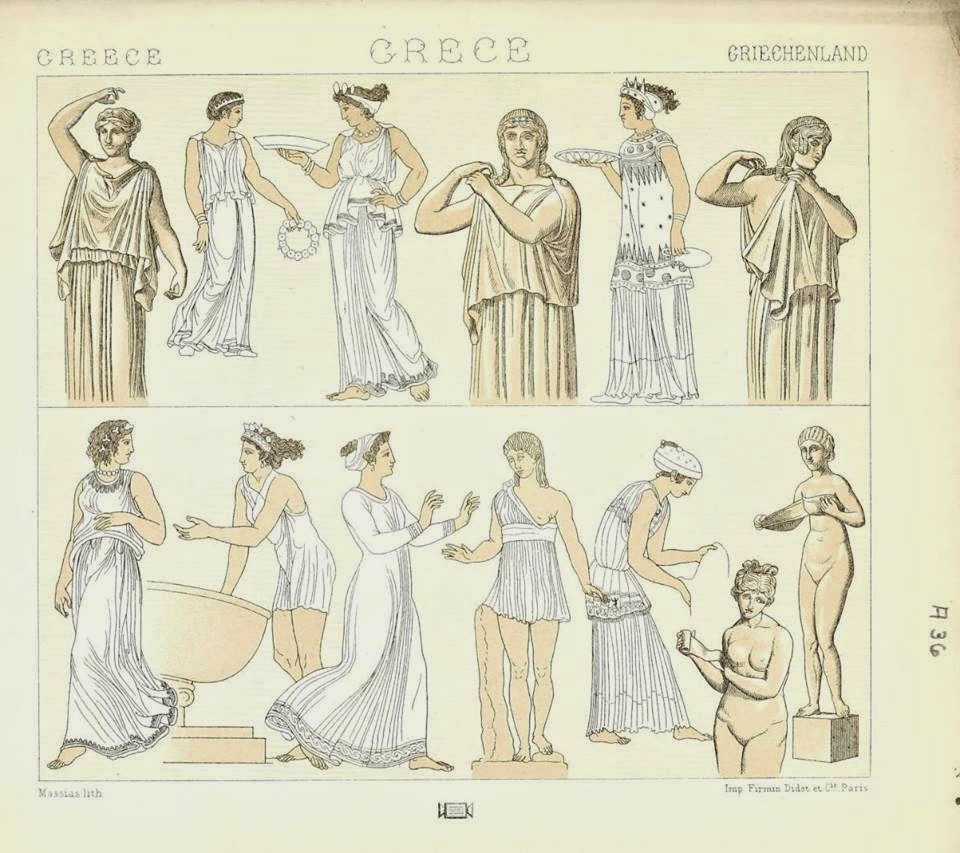 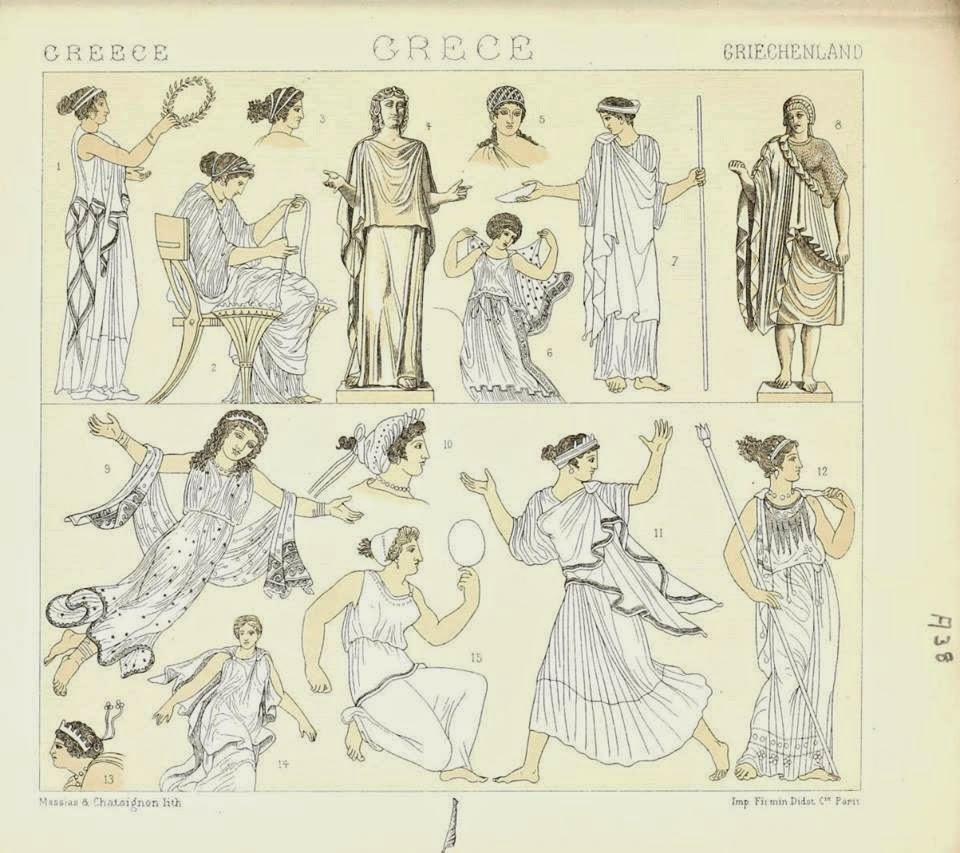