TUR IS RELATED WITH THE TURKS


TUR IS RELATED WITH THE TURKS
TURSKİA = THE TURKS - LAND OF TURKS.
...the link between the Etruscans and Troy. Firstly, the root of the name Troy in Hittite, tru (Truisa) and in Greek tro (Troie) appears to be identical to that in the name for the Etruscans, which is tru.
The e- in 'Etrusc' is a vowel prefixed to facilitate articulating the initial consonant cluster tr-. Compare the e-less variant Tur- in the Greek word Tursenoi, and the Latin Turcia derived from the earlier TURSKİA.
...the original language of Troy was a precursor of Etruscan. 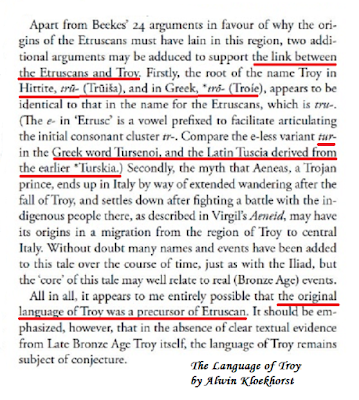 Priam, the name of the last Trojan king, is a vivid example for Trojan – Turkic kinship. This name is quite consonant with Priyam, the name of a Turanian (Old Turkic) commander in a Kazakh epic («The story of Priyam») .


This personal name is followed by a number of common Trojan – Turkic personal names. Troy itself, together with the name of its legendary founder, Tor, is the same Turyana (the country of the Turks) and its legendary leader, Tura, described in «Avesta» . In the poem «Shahname» by Firdovsi, an old Persian poet, the same country is represented as Turan and its eponym Tur .


The peoples mentioned in old sources under these names all appear to have a large number of common anthroponyms, ethnonyms and the writings they left in Italy appear to be Turkic. They were generations of the Turanians who had migrated to the Mediterranean basin independently from Asian Turks. The onomasticon of the peoples who were settled here and old genealogies concerning them reveal that they migrated from another centre of Turkic civilization, which seems to have existed in a large area between the Caspian and Black Sea and Asia Minor.


As for the Central Asian Turks, they were only a part of the proto-Turks who, in the 8th millennium B.C., had left their motherland – Fore Asia.


The English scientists, I.Lloyd and G.Child consider the Turanians to have migrated to Central Asia from Mesopotamia . Luis Delaporte, a French archeologist, in his work «The Hittite» mentions these people by the name Turki amongst those who fought against Naram-Sin (the heir of Sargon III) . The Turukkis and Turkis are also mentioned in the texts of Mari, Fore Asia. For instance, a text referring to the early 2nd millennium B.C. mentions the Turukkis living in the province of Tiguna .


The Turukkis/Turkis, who lived in 3rd and 2nd millennia B.C. in the territory of South Azerbaijan, in the neighbourhood of Mesopotamia , were the ancestors of the Azerbaijanis, who were later known as the Midians (Maday), mentioned in the Bible as a brother of Gomer, Tiras and others .


In old Indian languages these people were known as Turukka (Prakrit) and Turushka (Sanskrit) , the latter being close to Tursk («Etruscan») in Latin, Tursha («Trojan») in an Egyptian source of the 2nd millennium B.C.


Old Scandinavians considered the Trojans and the Turks to be the same people. In their sagas the legendary people, who are told to have settled in the North, are presented as either Turks or Trojans:
"Upphaf allra frasagna i’ Norreni tungi ðeirri er sanindi fylgia, hofz ða er Tyrkir ok Asia menn bygdu nordrit… Hofud madr ðessa folks uar Odin son ðors, hann atti marga sonu" .... «in the beginning of all trustworthy stories in the northern language it is told that the North was settled by Turks and the people from Asia… The leader of this people was Odin, the son of Thor».


In the Scandinavian writings of the 13th century («Junior Edda» by Snorri Sturluson, «The saga about Skyoldings», «The saga about Sturlungs, etc.) the people of Priam, a Trojan king, who is told to have come to the north of Europe under the leadership of Odin, are presented as Trojans. Asia, which Turks or Trojans are referred to, is Asia Minor, where legendary Troy existed.

Batiya. This female personal name is referred to the daughter of Teucros, the first king of Troy. The same female name (Batiya) is used in the Kazakh anthroponomy.


Alber, the name of a Trojan commander, is the same old Turkic Alper, denoting «hero», «brave» (O.Turk. alp, alb, «hero», «brave» - er «man») . Alper was widely used as a component of Old Turkic personal names, and in the name of Alper Tonga, a Turanian ruler. The Trojans, who settled in North Europe after the collapse of Troy, left this name in old Germanic sagas. «The saga about Nibelungs» tells us about the albs («heroes») and their king Alberikh - Trojan by origin.


Askan, the name of a Trojan hero, is completely consonant with an Old Turkic personal name – Askan, used by the Huns. Today it is observed in the anthroponomy of the Turkic Altays. Its origin stems from the appellative askan («violent», «naughty») , the Chuvash variant of the Turkic azhgın.
Paris, the name of Priam’s son, is consonant with the Turkic (Khakas) Paris, a variant of the personal names Baris/Barys/Barysh/Bars, used in other Turkic languages. It is derived from the Turkic parys/pars/bars («ounce», «snow leopard») and used as the symbol of strength in Turkic anthroponomy. It is also observed in such compound personal names as Barsbeg, Barskan, Barısbek (Kazakh), Barisbi (Karachay – Balkar), etc..


Atas, the name of another son of Priam, can be compared with Atas, a Kazakh personal name, derived from the Turkic ata («father») with the unproductive suffix s, denoting likeness, similarity: ata-s «like father», «similar to father». The analogical word is observed in the Bashkir language (atas «like father»).


The Etruscans and Trojans were those Turks who, according to N.Y.Marr , a famous Soviet linguist of the 1930s, were said to have settled in the Mediterranean basin before the Greeks and Romans. His conclusions about the early inhabitants of this region are correct as revealed by the onomasticon and Etruscan writings. Turkic elements, found in the old onomasticon of Greece, Italy and Troy, reveal the origin of the early settlers of the Mediterranean basin.


Thus, the Turks who made up only part of the Turanian race settled in Central Asia cannot be considered Central Asians by blood. According to old sources, some Turanians who migrated Westward established the early Mediterranean civilization.


* Etruscans, are called by the Greeks "Tyrrhenoi, Tyrsenoi"; by the Romans "Tusci, Etrusci " , while they called themselves onbehalf of one of their leaders "Rasna" "Rasenna" .
Halicarnassus Dionysius I.30; Otto-Wilhelm Von Vacano, The Etruscans in the Ancient World, New York 1960


* Asilas is a master of Etruscan lore. (Virgil's Aeneid,175-78,latin "Now all the troops rush back into the struggle-all the Latins, all the Dardans: Mnestheus and the brave Serestus, and Messapus , tamer of horses, though Asilas, and the Tuscans, and the Arcadian squadrons of Evander" )

* Astyr (Astur) the name of Etruscan warrior , also to be seen in Spanish tribe with Astures, horses and horsemanship. And of course in Homer İliad (6:400-405) "Him Hector was wont to call Scamandrius, but other men Astyanax; for only Hector guarded Ilios."

* Horse sacrifice was known between the Trojans, Etruscans and Odin and his people.... 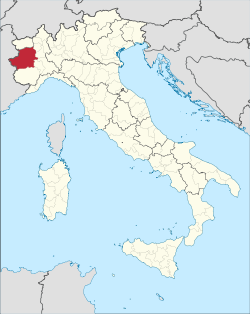 "Turin":
From the name of the people that once lived Taurini the Piedmont plain area where now stands the city. The root would taur of Indo-Aryan, meaning "Mountain." With the Roman conquest of the city came to be called Castra Taurinorum and then Julia Augusta Taurinorum. Actually the bull, which later became a symbol of the city, has nothing to do with the origins of the name. (translated with google )
Etimologia dei toponimi italiani capoluogo di provincia

TAURINI - TAUR
IS NOT INDO-ARYAN, BUT TURKISH.
TAUU - TAU - DAĞ - MOUNTAIN
EVEN "TURIN" HAVE TUR = ROOT WORD FOR TURK.
INDO-ARYAN DOES NOT EVEN EXİST.
IF YOU WANNA KNOW THE ETYMOLOGY
YOU MUST LOOK INTO TURKISH...!