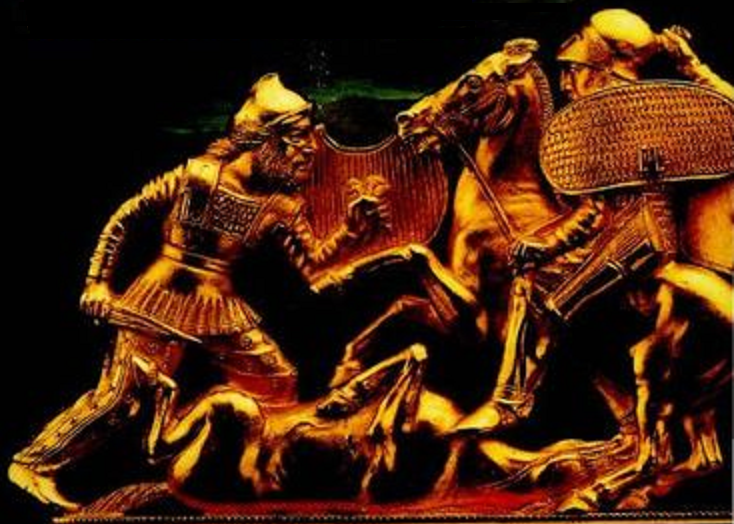 "Anna Comnena remarks that the Pechenegs (whom she calls “Scythians”) speak the same language as the Komans  Kuman - Kipchaq/Kipchak Turks)."


"Attaleiates efers consistently to the Pechenegs in Paristrion as "Scythians near the Danube", while reserving the more general term "Scythias" for all Pechenegs living both north and south of the Danube. He also knows and uses the name "Patzinakai" which may have been used by the local population (in Russian language Patzinak)."

Attaleiates, Historia (The History) (11th c), historian,scholar.
He knew many of the emperors and includes an eyewitness account of the battle of Mantzikert (1071), where the Seljuk Turks crushed the East Roman (till the 16th century it was not called as Byzantine) armies and opened the door for the permanent Seljuk Turks conquest of Asia Minor.

Oghuz Turks, The Ghuz or Turkmen also known as Oguzes.

"In 1000 BC these tribes were divided. A number of Oghuz tribe, had relationschip with the Indo-European language, and over time this Oghuz tribes become known as Ogur Turks. Ogurs are the progenitors of the Huns." - Prof.Yegorov Nikolay İvanoviç-historian, Chuvash

What was England called when the country was first founded?
ALBION ; Aristotelian Corpus 4th c BC: "Beyond the Pillars of Hercules is the ocean that flows round the earth. In it are two very large islands called Britannia; these are Albion and lerne" ... With Rome was Britannia, when the Angles conquered it, it became Anglia - today England.....

"" "Scotland" comes from Scoti, the Latin name for the Gaels. The Late Latin word Scotia ("land of the Gaels") was initially used to refer to Ireland. By the 11th century at the latest, Scotia was being used to refer to (Gaelic-speaking) Scotland north of the river Forth, alongside Albania or Albany, both derived from the Gaelic Alba. The use of the words Scots and Scotland to encompass all of what is now Scotland became common in the Late Middle Ages. ""

But it is not Gaelic Alba, it is from Alban Turks...

Chinees called the Huns "White Huns - Akhun" because of the color of their skin...

There is only 5 races on earth.
Capoid (black), Congoid (negroid), Mongoloid (yellow) , Australoid and Caucasoid (white-Caucasian- Europid) ....
and The Turks are in the "White Race - Caucasoid/Europid "

"The history of a people need to be read, a bit of
by looking at the writings of his enemies."
L.N.Gumilev


*"Now when Jove had thus brought Hector and the Trojans to the ships, he left them to their never-ending toil, and turned his keen eyes away, looking elsewhither towards the horse-breeders of Thrace, the Mysians, fighters at close quarters, the noble Hippemolgi, who live on milk, and the Abians, justest of mankind. He no longer turned so much as a glance towards Troy, for he did not think that any of the immortals would go and help either Trojans or Danaans."

*"Now the Scythians blind all their slaves, to use them in preparing their milk."

*18th century, Russian scholar V. Tatişçev, "the Iranians, the Germans and the Chinese can not be Scythian '....

*M. Vizantiyets says , Old Turks are named as "Saka" and for the Byzantine Emperor II Justianus, the agreement letter send by Göktürks (for Sasanian peace) ,was written in the Scythian language, known as the "barbarian Turks" ....

*Especially Russian Academy of Sciences, in many of the academy, Kazan Tatar Turks M.F.Zakiyeviç says , "from the second half of the 18th century, they started to become interested in the history of the Greek, of which A. Lızlov (the first edition of his book in 1692) indicates that the Turks and Tartars came from the Scythians" 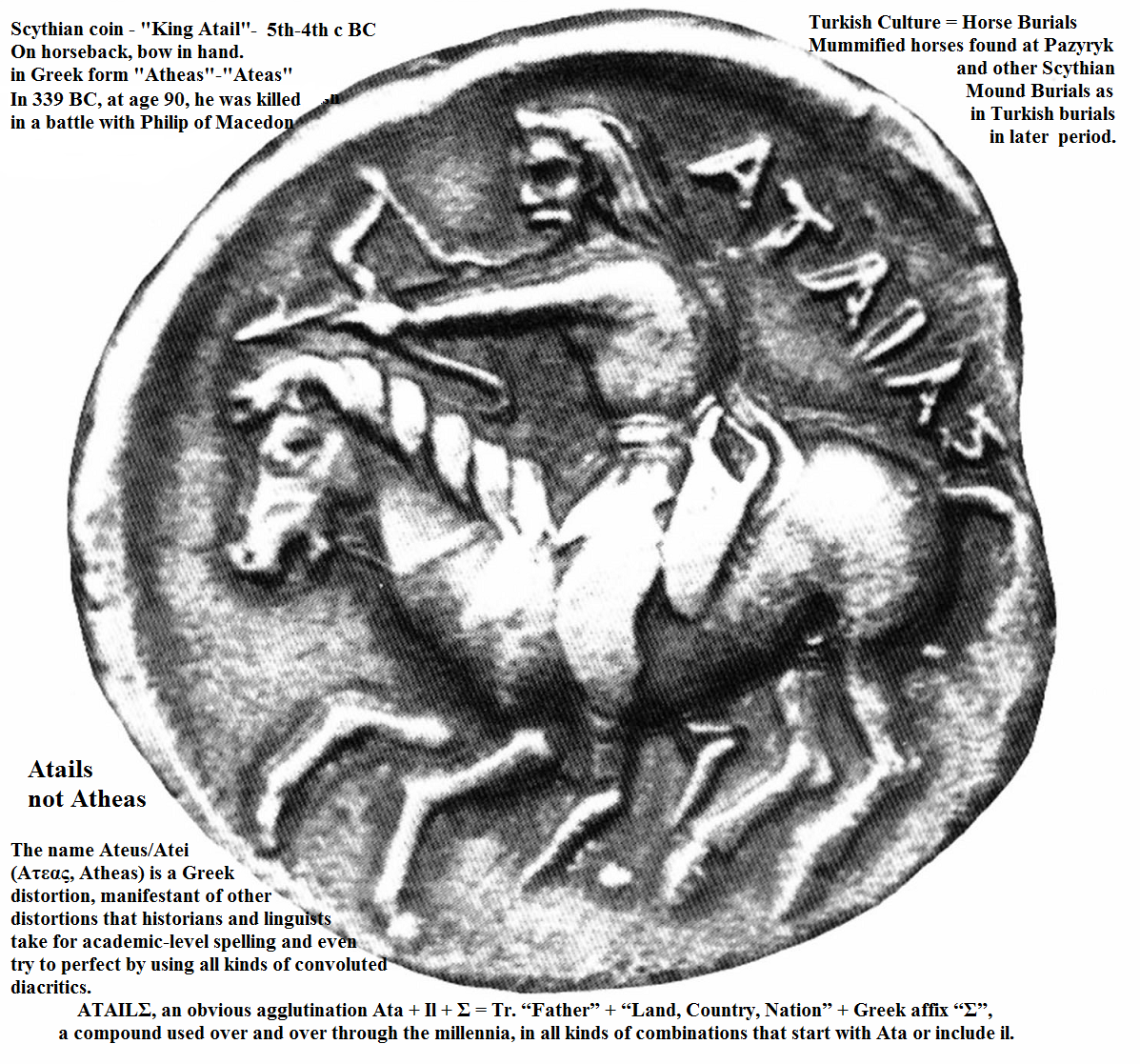 Given the archeological, philological and historical proofs and the Sumerian-Scythian and Avaricetymologies already published by other researchers, with the present study that fills the “Hunnic gap”in the Scythian-Hun-Avar-Magyar ethno-linguistic continuity, there cannot be any serious doubt anymore that the Hungarian Continuity Theory (HCT) is a historical truth and not a nationalistic-ideological phantasy...Prof.Alfred Toth.....LİNK 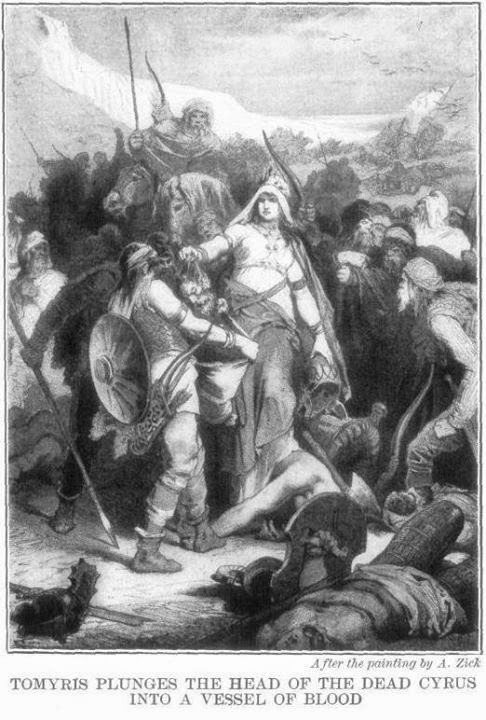 "At this time the Massagetae were ruled by a queen, named Tomyris, who at the death of her husband, the late king, had mounted the throne."

TOMRIS - Tomyris, historical person, was a queen who reigned over the Massagetae, a Turkic people of Central Asia (Azerbaijan ) , at approximately 530 BC.

She "defeated and killed" the Persian emperor Cyrus the Great during his invasion and attempted conquest of her country.

MASSAGETAE = SAKA = SCYTH = TURKS
TOMRİS IS A FEMALE NAME , STILL IN USE BETWEEN THE TURKS.

THUS
Scythian history is not just about the "Scythians" ....