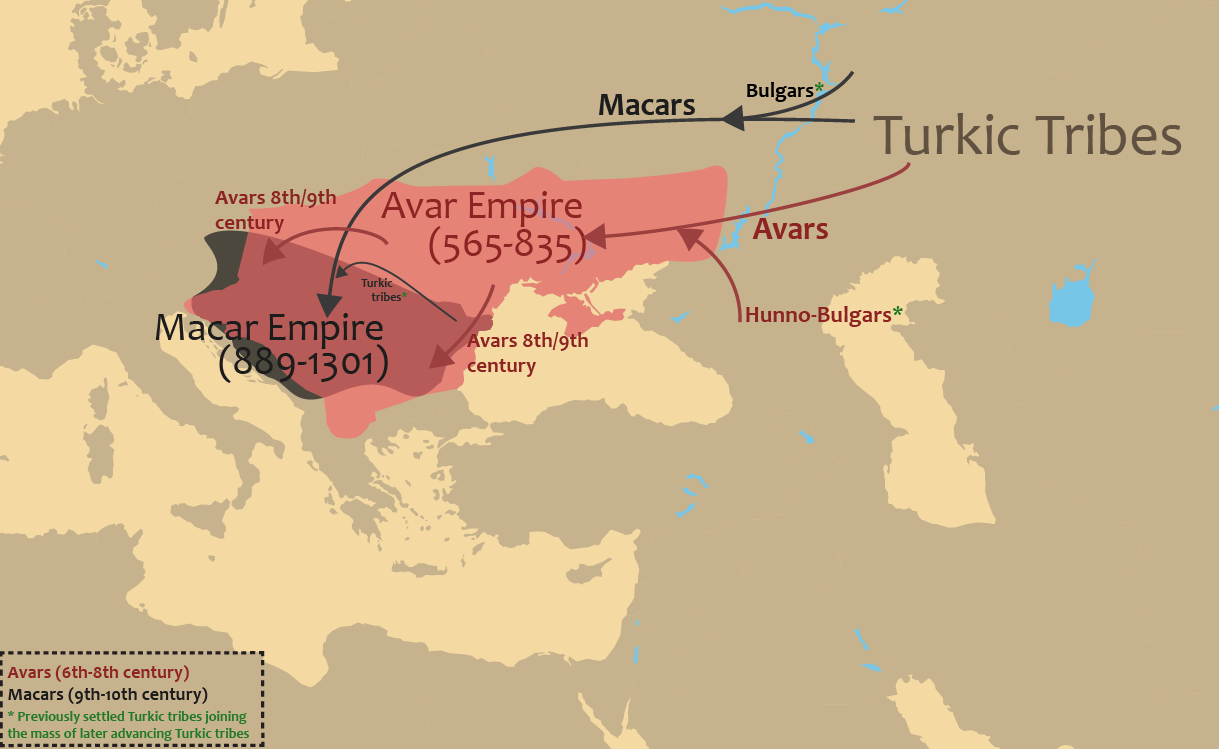 THE CONTROVERSY ON THE ORIGINS AND
EARLY HISTORY OF THE HUNGARIANS


The medieval Hungarian sources refer to the story of the Biblical Nimrod, son of Kush, and Eneth, whose two sons, Hunor and Magor, led the Huns and the Magyars from the regions neighbouring Persia to the land known as Scythia - a designation generally given to the region stretching from the Carpathians into Central Asia (1).

From Scythia, first the Huns (5th c. AD), then Árpád's Magyars (895-896 AD) established themselves in the Carpathian Basin. It is also stated in these sources that Árpád was a descendent of Atilla, and that therefore, under Árpád's leadership, the Magyars reconquered Hungary as their rightful inheritance from their Hun forebears (2).

The contemporary Persian, Armenian, Arab, Greek, Russian and Western sources generally concur with the Caucasian-Caspian origin of the Magyars and with the Scythian-Hun-Avar-Magyar identity (3). It is also interesting to note that although the Byzantine sources generally referred to the Magyars as "Turks" (Turkoi), they also mention that by their own account, the Magyars' previously known name which they used themselves was, in Greek translation, "Sabartoi asphaloi" (4).

This is extremely important because this name refers to the Sabir people, also known as the Subareans, who inhabited the land known by the Babylonians and Assyrians as Subartu which was situated in the Transcaucasian-Northern Mesopotamian-Western Iranian region (5). By their own account, the Sumerians of Southern Mesopotamia also came from this region which they referred to as Subir-Ki (6).

The Hun-Magyar relationship is also referred to in the recently published Hungarian translation of a Turkish version of the history of Hungary, (Tarihi Üngürüsz), based on an earlier Latin text lost during the Turkish wars (16th-17th c.). This source also mentions that when the Huns and the Magyars arrived in Hungary, they both found peoples already settled there who spoke the same language as themselves, thus lending support to the Hun-Magyar identity and extending the continuity of the Hungarian people in the Carpathian Basin further back in time (7)

At the time of the Magyar settlement, the bulk of the Carpathian Basin's population was made up by the remaining Avars, Huns, and other previously settled non-Indo-European peoples (51).

The archeological and anthropological data shows that beneath the apparent constant discontinuity due to foreign invasions, there seems to be a fundamental similarity and continuity of non-Indo-European peoples in the Carpathian Basin going back to the Neolithic period (52).

Gyula László also pointed out the Avar-Magyar ethnic continuity in his book "Kettös honfoglalás", in which he referred to the anthropological evidence indicating that there was a considerable Avar population in the Carpathian Basin at the time of the Magyar settlement, and that the Avars and the Magyars were anthropologically identical. Taking this into consideration with the accounts of contemporary Byzantine documents according to which the Avars spoke the same language as the Huns (53), the Hun-Avar-Magyar ethno-linguistic identity seems highly probable......

....It appears therefore that a fundamental revision of early Hungarian history is necessary in order to arrive at a more accurate picture, and much research work remains to be done in this field. Based on the available information, it seems most probable that the Hungarians are a synthesis of the peoples which have settled in the Carpathian Basin since the Neolithic period up to the Middle Ages: the Sumerian-related peoples of Near-Eastern origin (Neolithic, Copper and Bronze Ages), followed by the Scythians (6th c. BC), the Huns (5th c. AD), the Avars (6th c.), the Magyars (9th c.), the Petchenegs (11th c.), and the Cumans (13th c.)

Presently there are still many misconceptions concerning the Turanian peoples: it is still widely believed, erroneously, that the Scythians were an Indo-European people, that the Huns and Avars were Turkic-speaking peoples of Mongolian race or origin, and that the Magyars were a mixture of Finnic and Turkic elements.

These misconceptions originate from an inaccurate historical perspective which failed to recognize the existence of a distinct Turanian entity amidst the multi-ethnic conglomerates of the Scythians, Huns, Avars, and Magyars, whose empires consisted of tribal federations which included various other ethnic groups: Indo-Europeans, as well as Uralic and Altaic peoples besides the dominant Turanian elements.

In light of these findings, it would seem appropriate to re-examine this question objectively, avoiding the officially imposed ideological biases which have clouded the issue since the middle of the 19th c. and still continue to do so today.

video about;
Huns - Magyars. The Military Culture of Magyars and its Related Peoples

from the book:
"Huns - Magyars. The Military Culture of Magyars and its Related Peoples" 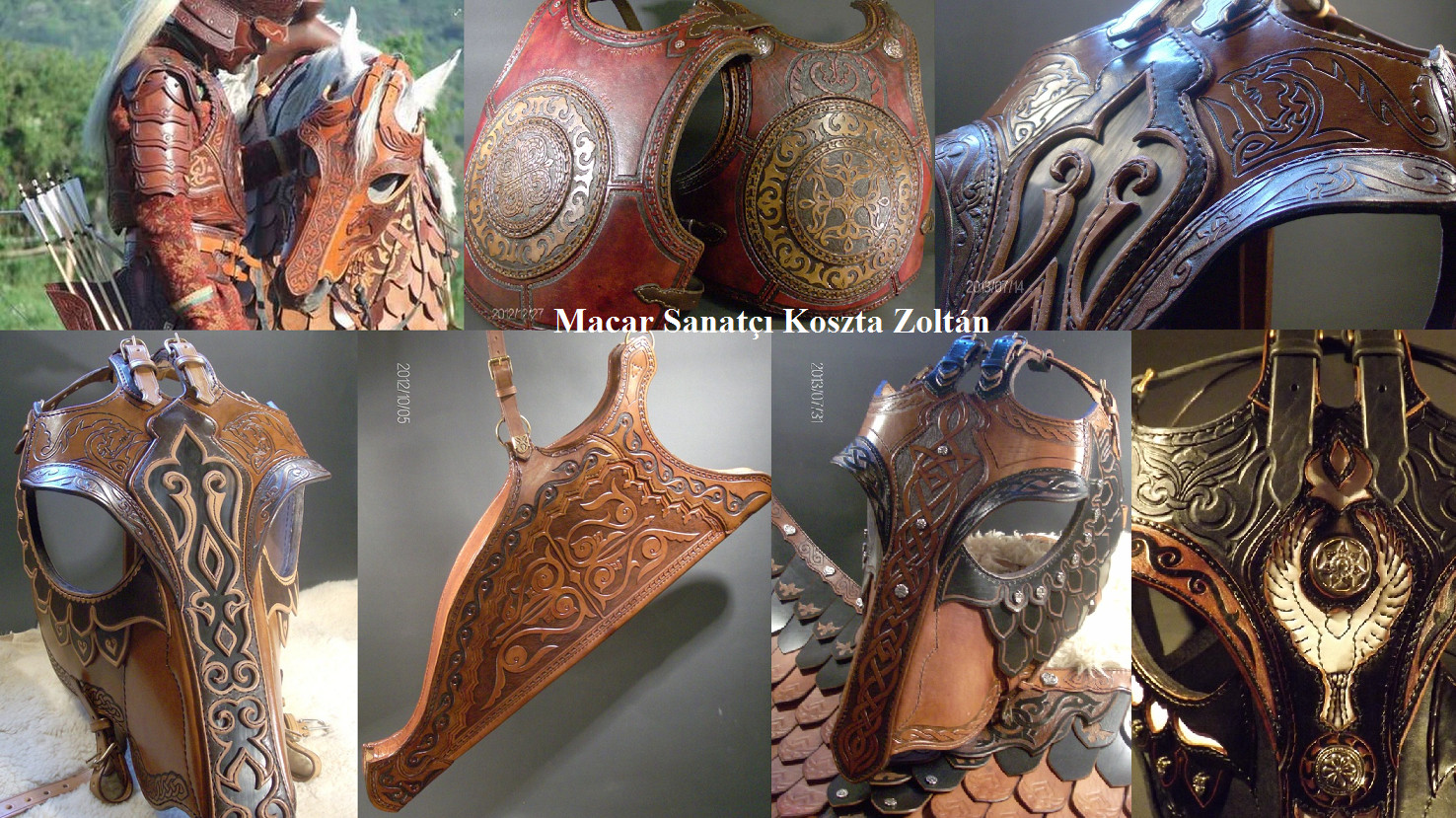 Kurultaj : in English
tribal assembly of the Hun – Turkic nations, celebration of the preservation of the ancient traditions


The historical geographical name of Turan refers to the area East of the Caspian sea. Archeological research has shown that this area saw the development of a highly evolved civilization of Sumerian (Mesopotamian) origin (S.P. Tolstov: Ancient Chorasmia). The Sumerians were the creators of the first known civilization, the inventors of agriculture, metallurgy, the wheel, writing, and astronomy, among others (S.N. Kramer: History begins at Sumer).

The 19th century researchers who discovered and studied the ancient Mesopotamian Sumerian language determined that it was related to the Turanian languages (M. Érdy: The Sumerian Ural-Altaic Magyar Relationship). Comparative linguistic analysis indicates that of all known ethno-linguistic groups, the Hungarian, Turkic, Caucasian and Finnic languages are by far the closest to Sumerian (K. Gosztony: Dictionnaire d'étymologie sumérienne et grammaire comparée). This is confirmed by archeological and anthropological evidence which shows that thousands of years ago, the Sumerians and other related Near Eastern peoples settled in the vast region of Central Eurasia from the Carpathian basin to the Altai mountains, from the Urals and Siberia to Iran and India (L. Götz: Keleten Kel a Nap (The Sun Rises in the East)).

The descendants of these Sumerian-related peoples were known as the Scythians, Sarmatians, Medes, Parthians, Chorasmians, Kushans, Huns, Avars, Bulgars, Khazars and Magyars, among others, and gave rise to the Finnic and Turkic-Mongolian ethnic groups. These Turanian peoples created flourishing cultures and states which exerted a determining influence on the peripheral Eurasian cultures of Europe, the Middle East, Persia, India, and China, as well as on the formation of the various Eurasian ethno-linguistic groups. See Historical Chronology

Dogma #1:
The myth of Indo-European "cultural superiority"
This myth was invented in the 19th c. and became the basis of the ideology of the Aryan master race. It claims that the ancient Indo-Europeans had a higher cultural level than various non-Indo-Europeans who were considered to be culturally inferior. This ideological bias manifested itself clearly at the so-called "Paris Peace Conference" after WWI, when the so-called "victorious" agressor states primarily responsible for the war (the "Allied and Associated Powers") invaded and dismantled two Turanian states, the Kingdom of Hungary and the Ottoman Empire:

"reminiscing over Hungary's punishment at the Paris Peace Conference, the British diplomat Harold Nicolson noted: "I confess that I regarded, and still regard, that Turanian tribe with acute distaste. Like their cousins the Turks, they had destroyed much and created nothing." This Allied participant at the Paris Peace Conference did more than just express his unflattering opinion of the Hungarian people. He captured the biased political atmosphere of the international setting in which the historical Hungarian state met its death." (Borsody, 1988)

This ideological bias still influences Indo-European research: the so-called "Kurgan theory" of Indo-European origins developed by Marija Gimbutas is one of the more recent examples. This theory is still being misleadingly presented as a credible scientific theory despite its highly questionable interpretation of the facts, the lack of conclusive data supporting it, and the substantial contradicting evidence (Götz, 1994).

The significant cultural and ethno-linguistic influence exerted over large areas of Eurasia by the Sumerians and related Turanian peoples played a key role in the development of the Semitic, Indo-European, and Ural-Altaic ethno-linguistic groups, as indicated by comparative linguistic analysis which shows that a significant number of words of Sumerian origin are present in those Eurasian language groups (Götz, 1994).

The fundamental problem with the Sumerian question is the fact that the creators of mankind's earliest known civilization were neither Semitic, nor Indo-European, and this is an inconvenient reality for certain leading interest groups whose ideological bias has been interfering with scientific research about the origins of the various Eurasian ethno-linguistic groups since the 19th century.

Dogma #7:
The theory of the "Finno-Ugrian" origin of Hungarians
The so-called "Finno-Ugrian" theory of the origin of the Hungarian people and language is closely modelled on the Indo-European "family tree" linguistic theory. As such, not only is the "Finno-Ugrian" theory fundamentally flawed, it was also developed during the 19th century when Hungary was under the foreign rule of the Austrian Habsburgs. As a result, this pseudo-scientific theory was part of the anti-Hungarian cultural policy specifically designed to weaken the national self-consciousness of the Hungarian people by distorting and falsifying their origins and history.

"let the conquered Hungarians believe that they have an ancestry more primitive than that of the Indo-European peoples. In Habsburg times Hungarian children were taught that most of their civilization came from the Germans: today they are taught that their 'barbaric' ancestors were civilized by the educated Slavs." (Bobula, 1982)

According to the latest genetic research (Semino, 2000), the main Hungarian ancestral population has inhabited its current Carpathian homeland for at least 40 000 years, and is of Central Eurasian origin. The genetic markers most characteristic of the Hungarian population are also present in Eastern Europe and Central and South-Western Asia, and correspond to the known distribution and movements of the ancient Scythian and Hun peoples based on the historical and archeological evidence, thus substantiating the Hungarian-Scythian, Scythian-Hun and Hun-Magyar ethno-linguistic connections.


Click on highlighted map links for images and documents on the historical Turanian empires at this link:


"All these linguistic findings combined with archaeological artifacts allow to confirm that Scythian had Turkic origin and modern Chuvashs are Scytians descendants."
Valentyn Stetsiuk
Ukraine

SABİR-SUBİR are also THE TURKS

The "West" tried for centuries to deny Turks and their rich history. When any new scientific discoveries, presentations or evidence comes out to prove Turkish civilization, the "West" hurriedly develop fictionalize/fabricated programs and articles to lie about Turks and Turkish great history.

We are a huge family, and the "West" shall accept that soon...