Coins of india and the Turks 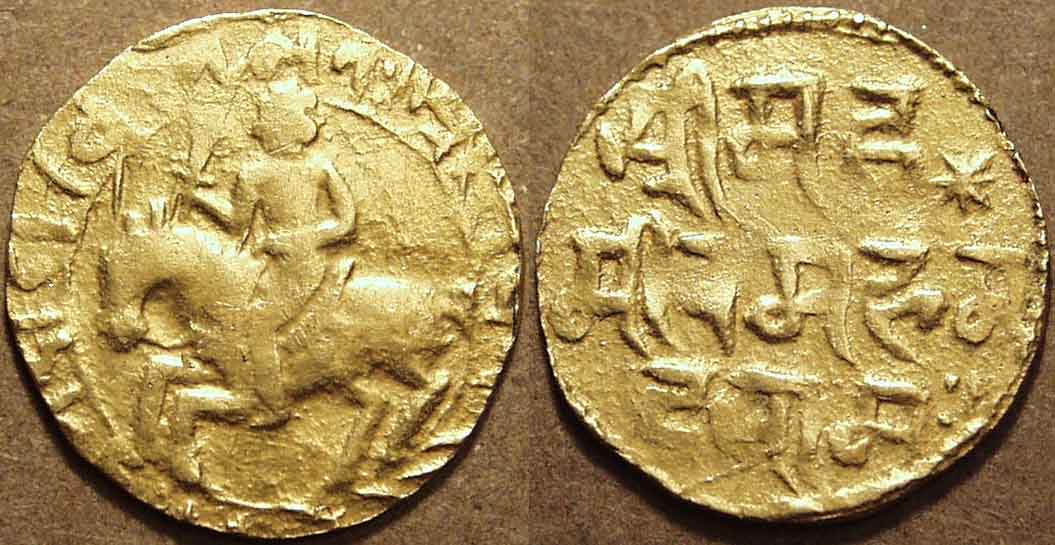 
The Delhi Sultanate was a Delhi-based Muslim Turkish kingdom
that ruled over large parts of India for 320 years (1206 – 1526).


Five dynasties ruled over Delhi Sultanate sequentially, the first four of which were of Turkish origin and the last was the Afghan Lodi. The Lodi dynasty was replaced by the Mughal dynasty which was also Turkish.

Oath ritual associated with themes of war, peace, initiation,
death and eternal life is the most archaic and
ancient traditions of Turkish tribes.The oldest visual iconography of the oath ritual ceremony can be seen in the statues of
Alps (heroes in wars), who had passed way.
Holding a cup in their hands,those statues tell us that the Alps,
by drinking water of life, reach eternity in their second lives.
Protected by common consciousness and having been transferred for thousands of years from one generation to the other,
oath ritual and related ceremonies are still carried out. 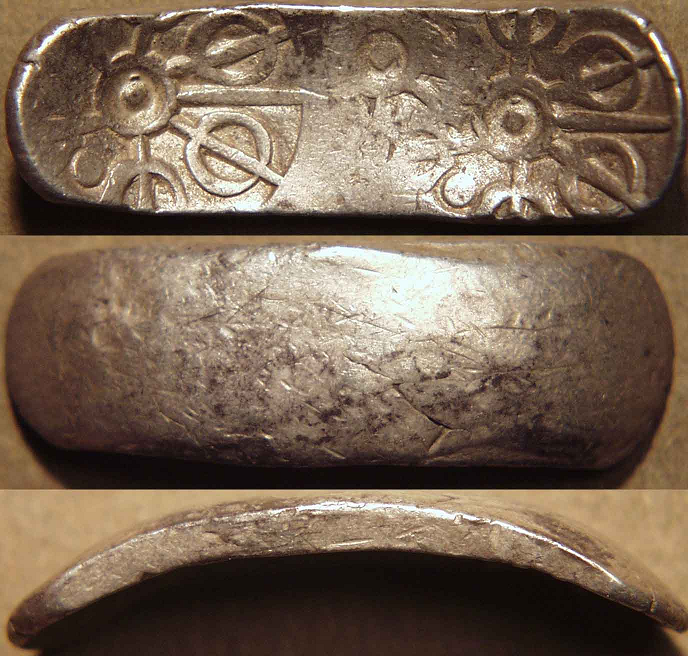 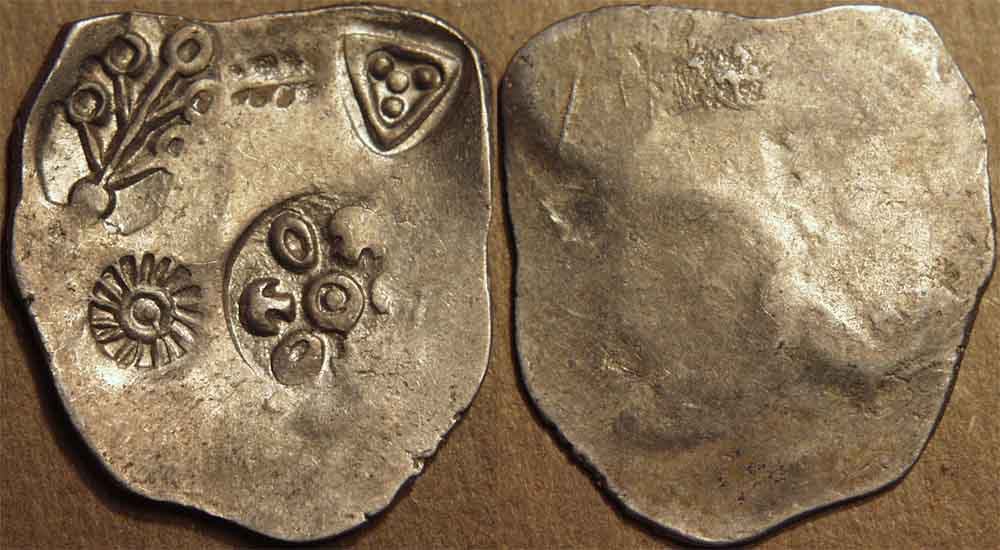 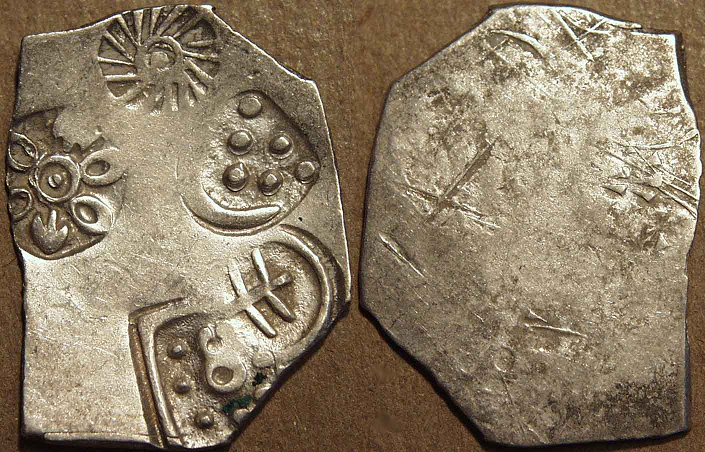 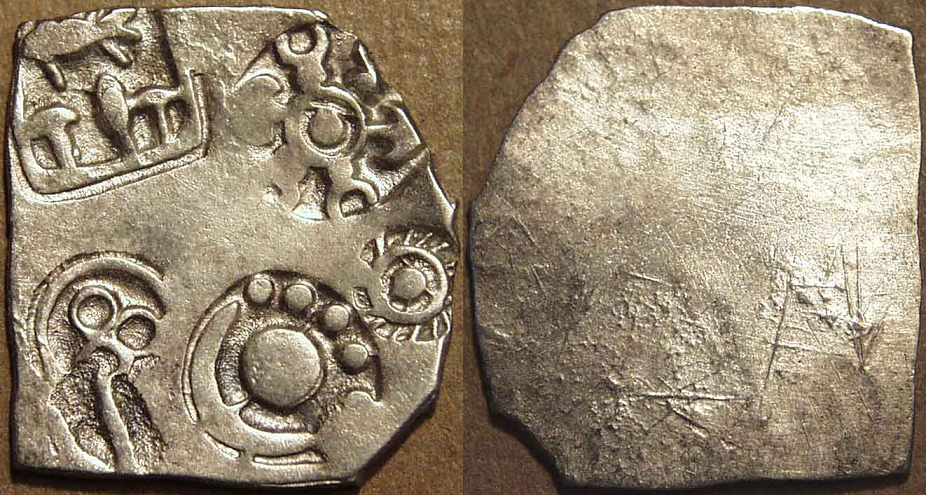 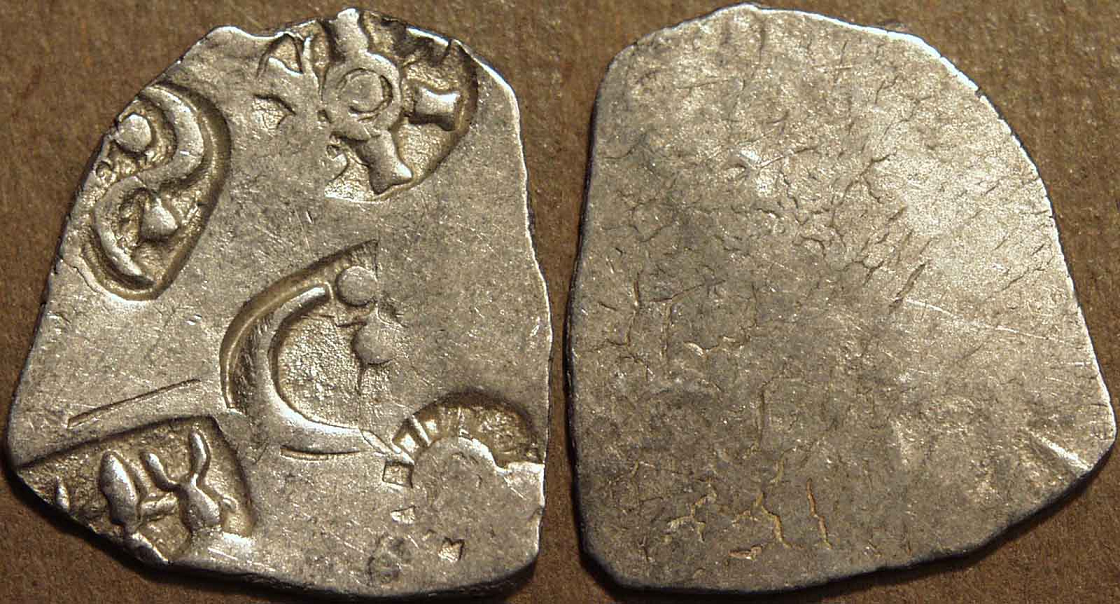 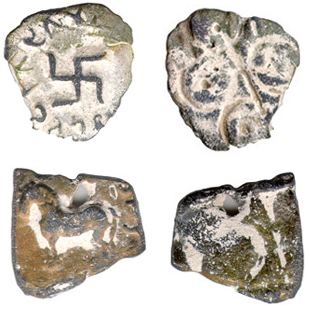 The Satavahanas were the early rulers of the region between the rivers, Godavari and the Krishna. They were also referred to as the Andhras. They soon brought under their control, both the Western-Deccan and Central India. The dates of their coming in to power are contentious and are variously put between 270 BC to 30 BC. Their coins were predominantly of copper and lead, however, silver issues are also known. These coins carried the motifs of fauna like elephants, lions, bulls, horses, etc. often juxtaposed against motifs from nature like hills, tree, etc. The silver coins of the Satavahanas carried portraits and bilingual legends, which were inspired by the Kshatrapa types.

the earliest Swastika was found in Saymaly Tash - Turkish Petroglyphs in Kyrgyzstan
15.000 years old. It is also to be seen in Sumerian  and Scythians which Proto-Turks are. 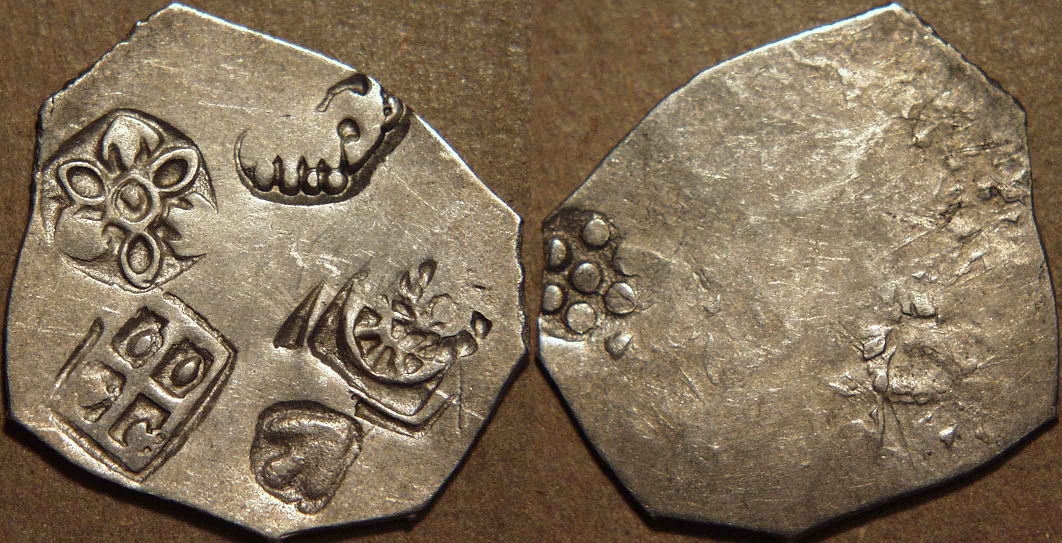 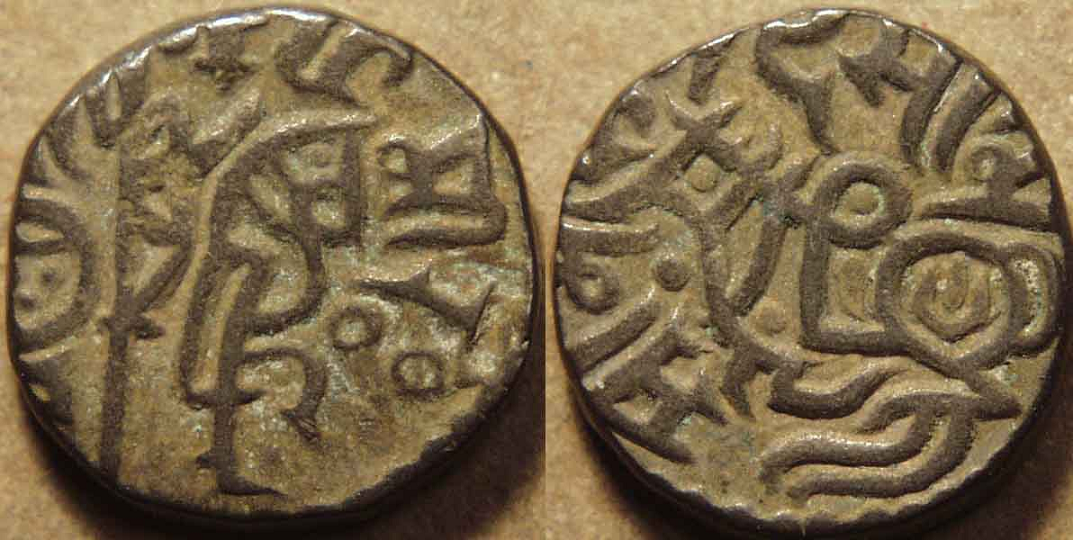 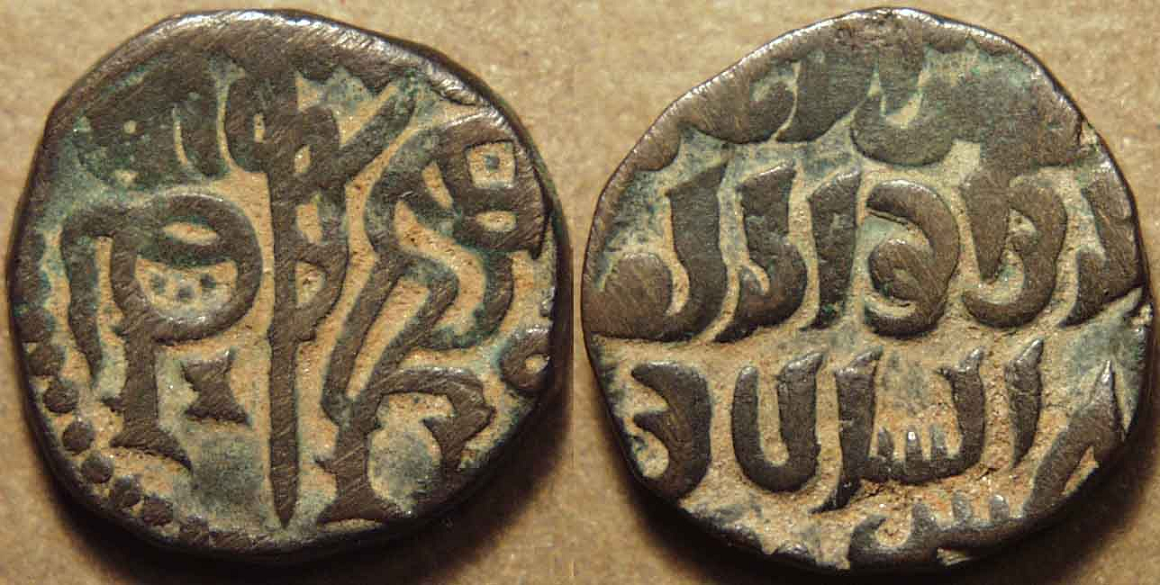 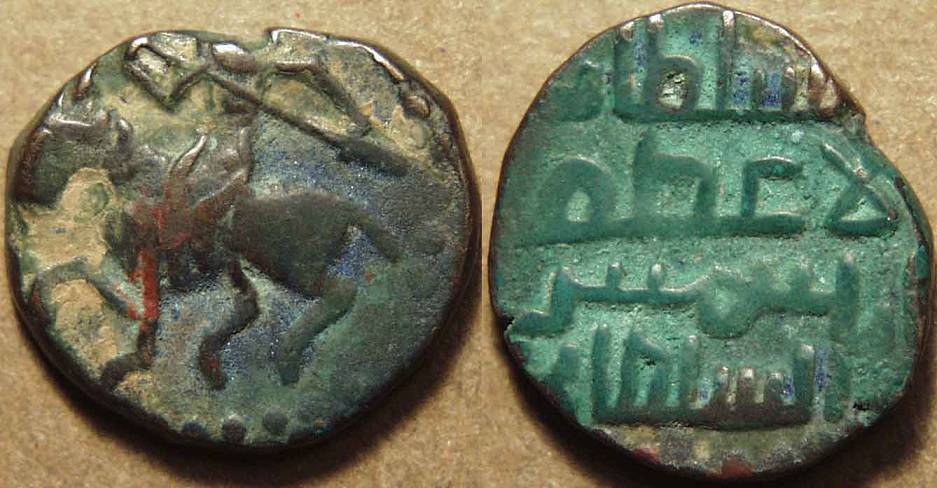 The Khilji dynasty or Khalji was a Muslim dynasty of Turkish origin, long settled in Afghanistan, which ruled large parts of South Asia between 1290 and 1320. 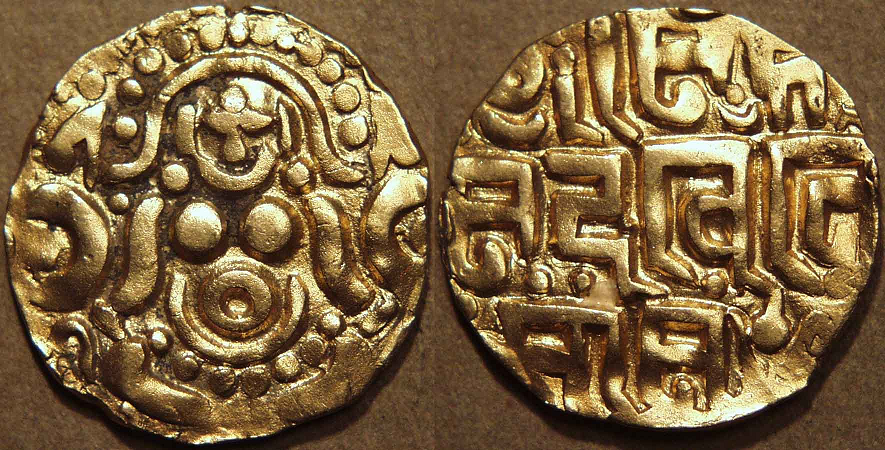 Nana is Turkish word for mother, grandmother, which we see also in Sumerian and Native languages.

The earliest Turkic people to adopt Buddhism were the Turki Shahis. They ruled northwestern India from the mid-third to the early fourth centuries CE and then shifted westward to rule modern-day central Afghanistan and eventually central and northern Pakistan until the mid-ninth century.

They inherited the blend of Hinayana and Mahayana Buddhism of their predecessors in these regions, the Kushans and the White Huns, and were strong patrons of the great monastic centers of study that had previously been founded there. During the late eighth and early ninth centuries, the Turki Shahis were vassal allies of the Tibetan Empire and influenced the flourishing of Buddhism there.

When the Arabs stormed into Afghanistan the Turko-Hephthalite government fled in disarray to the Kabul valley, where it coalesced into the Shahi state. They issued the well known "bull and horseman" jitals and maintained a tolerant Hindu-Buddhist culture for a while before the Ghaznavid Turks pushed them out of Kabul into the Northwest Frontier of Pakistan.

Some decades later the Muslims pushed them eastward again into India. A final push by the Ghorids extinguished them. Bull and horseman type coins continued in the region for another few hundred years.Coins from 750 to 1000 and a budist monestry from Fonduquistan Parwan Province.,Apghanistan. On a hill in the Ghurband Valley five kilometers south of Siahgird. 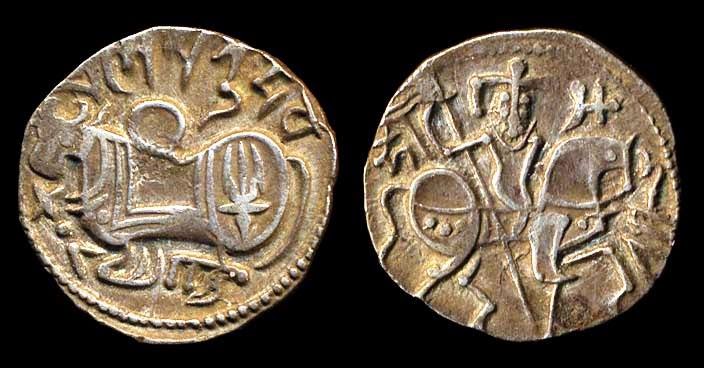 The fabrications.
The example of the mutilation in the Bhavishya Puran is one of the most potent evidences
that reveal the style of the working of the British.
more to read

İf they fabricate this,  they can fabricate everything !!!!
So look for the Truth, and the History can not been told without the Turks.
SB