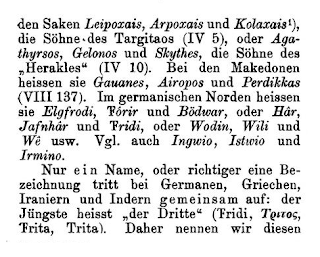 From the positions of Türkic language the word Targitai consists from targy or taryg - Old Türkic ‘farmer’ and soy~toy - Türk. - ‘clan’; as a whole it is ‘Clan or Ancestor of the Farmers’. Besides, the name Targitai is met not only in Herodotus, it also appears with Avars as a Türkic name. Theophilact Simocatta (the historian of the 7 c.) informs, ‘Targitiy is an outstanding man in the Avar tribe’ [Simocatta Th., 1957, 35]. Menandr the Byzantian informs that in 568 the Avar leader Bayan has sent Targitai to Baselius requesting a concession [Byzantian Historians, 1861, 392]. In 565 Avars sent the same Targitai as an ambassador to Byzantium [Ibis, 418]. In the 2 c. Polien informs that Scythians, living at Meotian (Azov) Sea, had a famous woman named Tirgatao [Latyshev S.V., 1893, 567]. Hence, these Scythians were also Türkic speaking.

Lipoksai is a senior son of Targitai. The etymology for this word Abaev borrows from Fasmer. The second part, in his opinion, consists of a root ksaia~khsai ‘to shine, to sparkle, to dominate’, Ossetian. - ‘queen, dawn’; the first part is not clear, there can be a distortion instead of Khoraksais: compare Old Iran. hvar-xsaita ‘sun’, Pers. Xorsed [Abaev V.I., 1949, 189].

Arpoksai is a middle son of Targitai. The first part Abaev at once transforms in apra and ‘water’ and deduces from the Iranian roots ap ‘water’ and Ossetian ra, arf ‘deep’; apra ‘water depth’; ksaia ‘possessor’; apra-ksaia ‘Possessor Of Waters’ [Abaev V.I., 1949, 189].

Let us compare it with the Türkic etymology. We already know about the second part: aksoy ‘a sacred clan, noble clan’. The first part - arpa ‘ barley, grain, product ‘; arpalyk ‘possession of land’; Arpaksai ‘Head of a Clan Possessing Land, Territory, or Clan of the Farmers’.

Kolaksai is a younger son of Targitai. Per Fasmer and Abaev, the second part ksaia ‘shine, sparkle, dominate’, in Ossetian khsart ‘valour’, khsin ‘princess’, khsed ‘dawn’ etc.; the first part is not clear, maybe, it is a distortion instead of Khoraksais, compare Old. Iran. khvar-khshaita ‘sun’ [Abaev V.I., 1949, 189]. The supporters of the Scytho-Iranian theory sometimes lead this name to the phonetic form of Persian Skolakhshaia and announce Kolaksai as a king of the Persian clan Skol (Skolot) ~ Scythians [Dovatur A.I., 1982, 207-208].

Let us compare it with the Türkic etymology. The second part of a word Kolaksai - aksai ‘a noble, sacred clan’; the first part - kola-kala ‘city, capital’; Kolaksai ‘Noble, Sacred Clan Of a (Protecting) Capital, Country’.

Let us consider the system in the Türkic etymology of the names of the father and his three sons. Targitai ‘Farmers Clan Noble Ancestor’, Lipoksai ‘Border Protecting Noble Clan’, Arpoksai ‘Protecting Possession Noble Clan’; Kolaksai ‘Protecting Capital (i.e. Kingdom) Noble Clan’. The last, the younger son, as relayed by Herodotus, accepts the kingdom from his father after he brought home the golden tools fallen from the sky: the plough, yoke, hatchet, and cup [Herodotus, 1972, IV, 5].

Another word, the etymology of which serves as a proof of correctness for the Scytho-Iranian theory, is ethnonym Sak~Saka. As the ethnonym used by Persians for Scythians, it is considered to be a Persian word. But at the same time Persians could take it from the non-Iranian Scythians themselves. In the opinion of Abaev, Old Persian saka (with the meaning of Scyth) belongs to the totem of deer [Abaev V.I., 1949, 179]. Ossetian sag ‘deer’ from saka ‘branch, limb, deer horn, antler’. Many historians think that sak is a name of one of Scythian tribes, accepted by Persians as an ethnonym for all Scythians. None of the ancient authors notes the meaning of the ethnonym sak~saka in the sense ‘deer’, and Stephan Byzantian informs, ‘Saka are the people, so are named Scythians of ‘armor’ because they invented it’ [Latyshev V.V., 1893, Vol. 1, Issue 1, 265]. Here the word Saka approaches Türkic sak~sagy ‘protection, guard, cautious’. Besides, it should be noted that in Türk. sagdak ‘quiver’, i.e. ‘case for weapon of defense’. Sagai - ethnonym of Türkic people between Altai and Yenisei, part of Khakass people, Saka - ethnonym of the Yakuts. Thus, sagai~saka~sak is a Türkic word, which has passed into the ethnonym of one of Scyth tribes, and was accepted by Persians as their common ethnonym.

Ababa (Hababa) is the name of the mother of the Roman emperor Maximin, she was, apparently, an Alanian. Thinking that Alans are Iranian-lingual, Abaev etymologies this word thus: Iran. khi ‘good, kind’; vab ‘to weave’; thus, Khivaba ‘Good Weaver’. In Türkic ab ‘hunt’, eb~ev ‘home’, aba ‘father, mother, sister’, Ababa ‘Mother Of Hunt or Mother Of House’, i.e. ‘Fairy’ in a good sense.

To prove the certainty of Ossetian speaking Scythians, Vs. Miller counted that in Scythian words the Ossetian plural affix -ma is repeated twenty times [Miller Vs. 1886, 281-282]. A more attentive analysis shows that -ma in words given by Miller may be identified with Türkic affixes of plural -ma (-la in Balkarian), or possession -my (-dy-ly), or similarity -mai.

So, all the Scythian words assembled by V.I.Abaev in his ‘Dictionary of Scythian words’ would be possible to re-etymologize with those languages, whose carriers lived and continue to live in the so-called Scythian regions. Rather, it is necessary to do it, and with the subsequent comparison of the results of the Iranian, Türkic, Slavic and Finno-Ugrian etymological studies. Only on completion of this operation it would be possible to definitely tell what ethnoses lived under the common names of first Cimmerians, and then Scythians, Sarmatians, Alans-Ases. As the given here comparisons of the Iranian etymology with the Türkic show, the Scythians most likely were not Iranians, or among them were very few Iranian-lingual; basically they were Türks, it could be expected, and Slavs, and Finno-Ugrians, for the last also have not fell from the sky, and have lived in their (ancient ‘Scythian’) regions from the most ancient times.

ETHNIC ROOTS of the TATAR PEOPLE
Mirfatykh Z. ZAKIEV - LİNK
TATARS: PROBLEMS of the HISTORY and LANGUAGE
Collection of articles on problems of lingohistory, revival and development of the Tatar nation.Kazan, 1995. Pp.12-37