The Khazars were a Turkic people who originated in Central Asia. The early Turkic tribes were quite diverse, although it is believed that reddish hair was predominant among them prior to the Mongol conquests. In the beginning, the Khazars believed in Tengri shamanism, spoke a Turkic language, and were nomadic. Later, the Khazars adopted Judaism, Islam, and Christianity, learned Hebrew and Slavic, and became settled in cities and towns thruout the north Caucasus and Ukraine. The Khazars had a great history of ethnic independence extending approximately 800 years from the 5th to the 13th century.


The first Khazar capital was Balanjar, which is identified with the archaeological site Verkhneye Chir-Yurt. During the 720s, the Khazars transferred their capital to Samandar, a coastal town in the north Caucasus noted for its beautiful gardens and vineyards. In 750, the capital was moved to the city of Itil (Atil) on the edge of the Volga River. In fact, the name "Itil" also designated the Volga River in the medieval age. Itil would remain the Khazar capital for at least another 200 years. Itil, the administrative center of the Khazar kingdom, was located adjacent to Khazaran, a major trading center. In the early 10th century, Khazaran-Itil's population was composed mostly of Muslims and Jews, but a few Christians lived there also.


"It is certain that Khazar Jews lived in Phanagoria (Tmutorokan), since over sixty tombstones bearing Jewish symbols (such as seven-branched menorahs, shofars, and lulavs) on one side and Turkic tribe symbols (tamgas) on the other side were found on the Taman peninsula. Many of these tombstones date from the eighth or ninth century. Khazarian tombstones on the Crimean peninsula also depict the shofar, menorah, and staff of Aaron, as well as Turkic tribe symbols... The artifacts from Taman and Crimea are extremely significant since their tamgas show that these Jews were ethnic Turks." - Kevin Alan Brook, in The Jews of Khazaria (Jason Aronson, 1999), page 142 (link)


Khazaria is regarded as the "country of the Jews" (Zemlya Zhidovskaya) in Russian folk literature (byliny). And the Schechter Letter informs us that some of the Alan people (neighbors of the Khazars to the south) also adopted Judaism (see Golb and Pritsak, Khazarian Hebrew Documents of the Tenth Century, pages 113 and 115).


"Norman Golb and Omeljan Pritsak now present two Hebrew texts... The first manuscript, referred to as 'the Kievan letter,' is 'the earliest original document in any language containing the name Kiev.'... The second document -- known as the 'Schechter text' (an anonymous Khazar's epistle to Hasdai ibn Shaprut of Cordova) --is a fragment dating from the mid-tenth century. [The] book includes photocopies of both manuscripts, along with printed Hebrew texts of the same documents, accompanied by Golb's new English translations on the opposite pages. Paleographic and textological analyses follow, which argue convincingly in favor of both texts' authenticity. Each document is then fitted into a broader historical background, to produce most interesting conclusions... We... find their thesis plausible: 'Khazars who adopted Judaism . . . came to form a part of the Ukrainian component of eastern European Jewry . . . eventually to be assimilated by it.' This is an intermediate view, between the claim that only a few, high-ranking Khazars adopted Judaism and the opposing hypothesis that large numbers of Ashkenazim are descended from Khazars." -- Horace W. Dewey, in The American Historical Review (1983)


"...[Khazarian Hebrew Documents of the Tenth Century] puts to rest whatever lingering doubts one might still entertain regarding the Khazars' relationship with Judaism and the contemporary Jewish world. The collaboration of two eminent linguists and historians like Golb and Pritsak has resulted in the final and most authoritative edition, translation, and explanation of the two key Hebrew documents [the Kievan Letter and the Schechter Text] which were found in the Cairo Geniza... The authors' well documented arguments leave no doubt about the authenticity of both these documents. Pritsak's brilliant linguistic comments explain the origin of the Turkic names found in the documents, and at the same time give a persuasive historical reconstruction for a period and a geographic area that still need thorough investigation." -- Vera Basch Moreen, in The Jewish Quarterly Review (April 1983)


"[T]he publication of a new and important source, a tenth-century Khazarian Hebrew document from Kiev, is a truly important event.... Golb and Pritsak have rendered an invaluable service to Khazar and Rus' studies in not only preparing excellent editions and translations of two important sources, but also in providing commentaries to the texts that are both richly informative and thought-provoking. Even when disagreeing, one is compelled to rethink many problems and this is all to the good... In any event, the work stands as a landmark in Khazar, early Rus', and East European Jewish studies." -- Peter B. Golden, in Harvard Ukrainian Studies (December 1984)


"The book... has much to offer to Hebrewists, historians of religion, and even researchers of Khazar history." -- Lajos Ligeti, in Acta Linguistica Academiae Scientiarum Hungaricae (1981) Unfortunately, the English edition - "Khazarian Hebrew Documents of the Tenth Century", released by Cornell University Press in 1982 - is out of print. Only the Russian edition can currently be purchased. (link)


No Turkic words exist in the Yiddish language. FALSE

The Khazars were not a highly cultured people. FALSE

Since the Ashkenazi Jews are genetically Israelites, then it is not possible that they had any ancestors who lived in the Khazar kingdom. FALSE - BECAUSE KHAZARIA WAS A DESTINATION FOR THE JEWISH DIASPORA, AND KHAZARIAN TURKISH JEWS INTEGRATED WITH OTHER JEWS

"The Invention of the Jewish People" by Shlomo Sand
is also an interesting book...!

// Thus, not all Ashkenazi! Jews (who rule the World!) are descendants of the Ashkenazi Turks. Being a Ashkenazi Jew was important for them, they accepted Khazar Jews as "Noble" !... 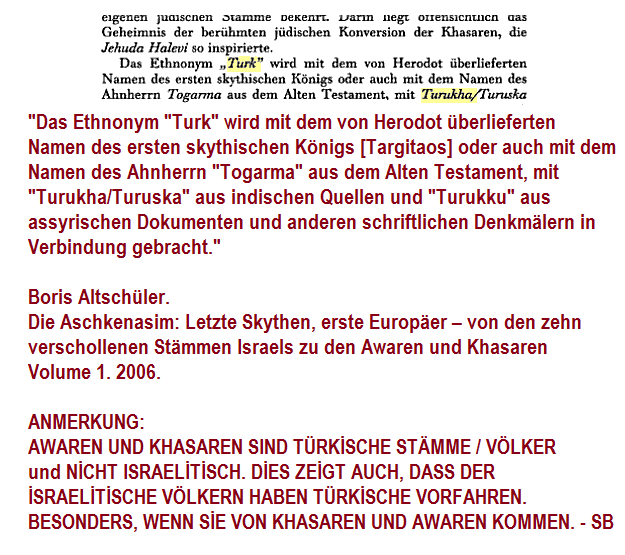