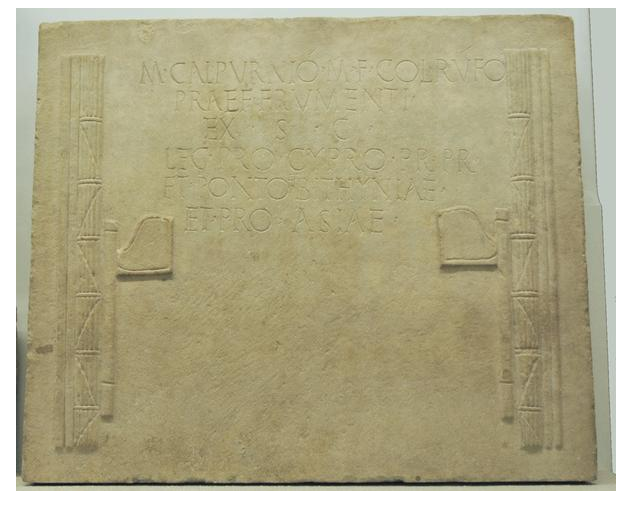 
The tombstone of Marcus Calpurnius Rufus - Ephesus
(in British Museum!)


Decorated with two fasces, sums up his career. He had been prefect of the Roman corn supply and governor of Cyprus, Pontus and Bithyniae, and finally Asia, where he died. Son of an important imperial priest during Tiberius's reign, and a senator of Pamphylia during the rign of Claudius. Fasces are Etruscan of origin, and adopted by Romans. Americans have placed fasces on congress and public buildings between 1925 and 1941. The term Fascism is derived from Fasces! 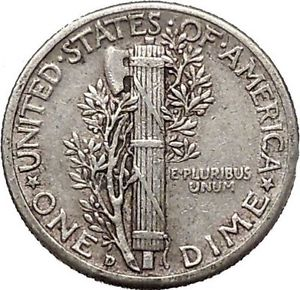 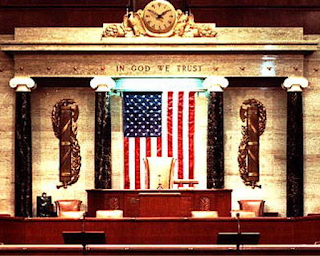 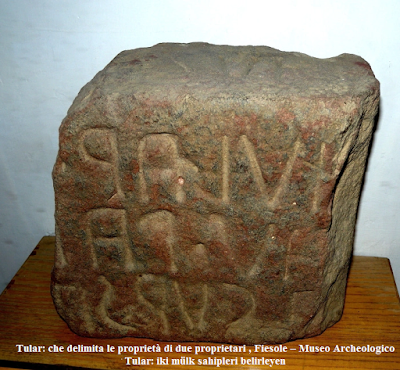 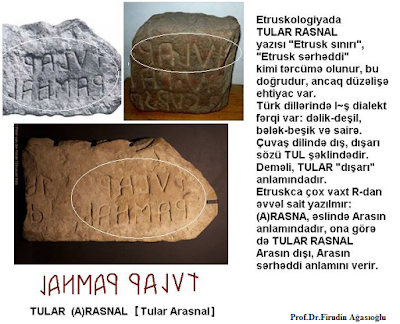 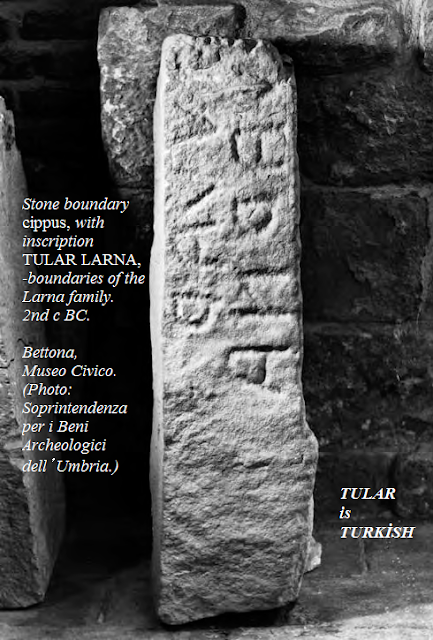 Etruscans spoke old Turkish.
TULAR is Turkish, means also Boundary in Turkish, still in use in decrees.The "world" must look into the Turkish language, culture and history to solve their "mystycal history"!
Regards,
SB

Many ancient Greek and Latin authors who supply a wealth of observations about the Etruscan presence in Italy and the geography of the region known asTyrrhenia or Etruria. To appreciate the Etruscan concept of space, it is important to acknowledge the physical configuration of Etruria (While thewide open spaces of southern Italy or Sicily provide a sense of infinity, the Tuscan landscape presents a variety of smaller units, where valleys and rivers, fields and pastures alternate with wooded hills and high mountains. Depending on the area, one community would look out over an inviting set of rolling hills, continuing down into the plains along the Tyrrhenian shores, while others further inland were enclosed by steep mountain sides that provided protection but that also discouraged interaction with the inhabitants in the next valley over.

All these spaces were part of the daily experience of the Etruscans. From the earliest evidence of human habitation in Etruria we find that some spaces were set aside for living, other spaces for burials, and yet others for the worship of deities. Within all these aspects of Etruscan activity, some spaces may be called ritual because of a religious act that took place there, such as a sacrifice or a procession, and such a place may be synonymous with, or exist parallel to, a space that is sacred in and by itself. Such ritual and sacred spaces exist in contrast to those that were designated for secular activities, independent of divine intervention or involvement.

Any space, whether sacred or secular, was defined by its shape and boundaries. In a landscape like that of Tuscany,these spaces are most commonly defined by the natural setting, the presence of rivers and lakes, narrow valleys, caves, and groves. The terms for such spaces and boundaries are usually known from the Latin vocabulary (templum,* auguraculum,* limes,* limitatio,* pomerium*) but exist also in the limited Etruscan nomenclature preserved in inscriptions or referred to in Latin texts (‘‘boundaries,’’ tular,* and perhaps also ‘‘surveyor’s pole,’’ groma/gruma).

As with customs and traditions, more often than not there would have been no need to mark the boundaries of such spaces in any particular way since their existence was well known to the local inhabitants. The Latin texts indicate, however, that spaces and boundaries could be defined in some particular fashion, such as by a plowed furrow, and were thus made recognizable to any passerby. At other times a boundary was marked by especially designed boundary stones, inscribed in Etruscan with a formof the word tular translated as ‘‘boundaries’’.

As always, it is difficult to separate the original Etruscan traditions from their distinctly Roman counterparts in the historical and literary tradition. According to the so-called prophecy of Vegoia, the division of land and the establishment of boundaries was the result of Jupiter’s (i.e., Tinia’s) interaction with humans. The reason for his action was to create order and to prevent human greed for land from upsetting the established balance of ownership. In the specific case of boundaries, the Roman author Frontinus, best known for his treatise on aqueducts, quotes the polyhistor Varro as saying that boundaries were part of the Etruscan science or Etrusca disciplina since the division of the world according to the cardinal points of north, south, east, and west was designed by Etruscan priests, the haruspices.

But, in spite of Roman political supremacy in Italy and the Mediterranean, the Romans were the first to acknowledge the strength of the Etruscan influence on Roman religious traditions.

The Etruscans were more culturally advanced than the Latins. They made many contributions to Roman civilization. In the area of arhitecture, the Etruscans taught the Latins how to use the arch in building bridged. The Etruscans also laid the foundations of Rome's first sewer system. They drained the swamp at the foot of the Palatine. This later became the place where Rome's Forum or the public square, was built. The Forum housed a palace, government buildings, and law courts.

The Etrsucans made a contribution in the area of languages as well.  They borrowed the Greek alphabet and made some changes in it. [No they didn't, the Greeks writing system begins from the 8th c BC, but the Etruscans was allready gone, circa 12th-11th c BC. and see, non-Hellenic Pelasgians "Lemnos inscription" a non-Hellenic inscription!.-SB] The Romans, in turn, borrowed the Etruscan alphabet.

The Romans also borrowed some Etruscans customs. One was the fight of enslaved people held at Etruscan funerals. These were models for the gladiatorial games with which the Romans amused themselves. These games were fights between armed men, between men and animals, between women and dwarfs and between animals. Another custom borrowed from the Etruscans was the Triumph, or the parade-like welcome given a Roman Hero returning from battle.

In addition, the Romans borrowed Etruscan symbols of authority. One of these was the fasces, or a bundle of rods bound around an axe. It became the symbol of a Roman ruler's power to beat or execute other people.

The Etruscan also introduced the Romans to certain religious beliefs. These included soothsayers and gods with human forms. The Etrsucan built the first temple on the Capitoline (kap'uh tuh lin), one of the seven hills of Rome. Today it is the center of Rome's municipal, or city, government.

The Romans founded their cities according to a ritual borrowed from the Etruscans. Soothsayers read omens that told where the city's boundaries should be. A ditch was dug to mark the boundaries. The plow used to dig the ditch had a bronze blade and was pulled by a white bull and cow yoked together. Workers then dug a trench at the center of the city. After each of the city's founders had tossed a handful of earth into the trench, the priests took over. They laid out the main street and determined the principal cross street. The place where the two streets met was marked by a stone.

The Etruscans believed that the stone covered a shaft leading to the underworld. Three times a year, an Etruscan priest lifted the stone to allow the souls of the dead to return to Earth. The Romans believed the place where the two streets met was the mundus (muhn'duhs), or the meeting point for the worlds of the living and the dead.

Etruscans were not the first to develop or use many of the ideas and practices the Romans borrowed from them. They were, however, the people who brought these ideas to the notice of the Romans. Thus, they played an important role in the development of Roman civilization. 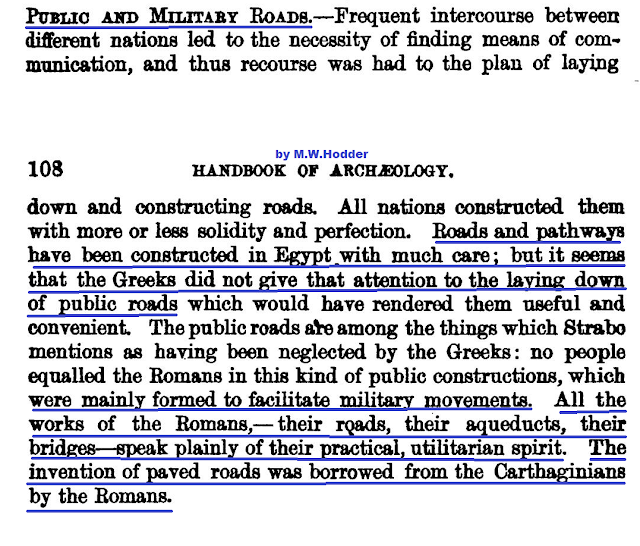 Roads was borrowed from the Carthaginians by the Romans.


"The forms of the letters of a Greek inscription are also an approximate indication of its date. It is evident that it is impossible to find in an inscription of a certain date the use of a letter which was not as yet in the Greek alphabet at that same period. The Greek alphabet, like that of all the ancient nations of Europe, was at first composed only of sixteen letters, which were said to have been introduced by Cadmus from Phoenicia. At a later period Palamedes is supposed to have added the four double letters. Simonides is tated to have made the further addition. And as this alphabet came generally into use at Athens after the archonship of Euclides BC.403....

The Greeks, following the mode used by Eastern nations of Semitici origin (the language of the Aryan race are read from left to right), at first wrote from right to left; no monument, however, has come down to us that can with certainty be attributed to the period in whih this method was exclusively in use. Inscriptions of a single line are, it is true, written in this manner, as for instance, the inscription found by Colonel Leake on a small votive helmet at Olympia, and the inscription on an early vase of Athens. IMENOA . ANE . ENE . ANOT, but the first line of an inscription which belongs to the second mode of writing adopted at a later period by the Greeks, is always inscribed from left to right.... 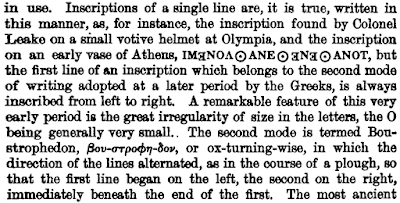 Kirchhoff distinguishes two main divisions of Greek alphabets - the east and the west; not that this geographical distribution is exact, but it is the most convenient. The eastern includes: first, the alphabets of the towns of Asia Minor - Halicarnassus, Ephesus, Teos, Miletus, Colophon and Rhodes, which agreeing essentially, became that Ionc alphabet that was adopted at Athens, BC.403, and is the Greek alphabet with which we are familiar;

Secondly, those of the Aegean Islands - Thera, Melos, Crete, Paros, Siphnos, Thasos, Naxos - in which (?)does not stand for Omega, but occasionally appears as O for Omicron, and there are other minute differences in the shape of the letters.

Thirdly, some of the alphabets of the mainland of Greece, which have a closer affinity to the Ionic [Ionians are not Hellen (Greek)-SB] than to their neighbours, viz. the old one of Attica, down to OL 94 - Argos, corinth and its colonies, Cocyra, and even Syracuse....

Even the She-Wolf and Gladiator Games are not Roman but Etruscan origin. 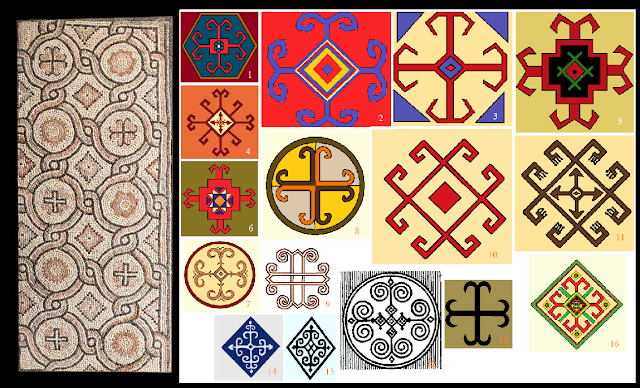