Avars, the second Turkish tribe, shocked Europe after Huns. For many years was a discussions over the origin, but thanks to the archaeoligical excavations and research turns out to be of Turkish origin.

To understand the essence of the matter, the following points should be well known;

Historian Priscus (5th c) wrote about Avar people in West Siberia, 100 years before the crash of Juan-Juan in Central Asia.

Another source is Zakharios Rheta (in c.550) wrote about Abar community in west, before incidents in Mongolia.

Geographer Strabo in his work (1st c AD) mentioned about Abar-Noi, and in old Greek myths the name Abaris is to be known.

It is to be understood after these explanations, about the Turkish- Avar (Abar) State which was build in Europe, has nothing to do with Juan-Juan which was entirely collapsed in Mongolia.

Also, before the time of Juan-Juan, tribe name Apar was on Orkhon monuments/inscriptions, like tribes names Sabar and Khazar, which shows west Avars. After 562, Slavs and Ants came under Avar-Turks domination. The great role, for this success belongs to Bayan Hakan.

The word BAYAN is not Mongolian, but Turkish, comes from BAY (rich) root word, and it was not only used by Mongolians, but also by Bulgarian Turks.

Avar-Turks moved Gepids from east Hungary. Lombards (or Longobards) didn't like Avars and moved to in 568 to Pannonia, and when Hungarian lands became empty, Avar-Turks settled there. They defeaded Frank king Siegebert, take Belgrad (Signidiunum) and Oszek (Sirmium), and marced to İstanbul. The boundaries of Avar country stretched from Don river to Galia. Avar-Turkish Khaganate became most powerful state in Europe. The reason of this situation was undoubtedly the army of Avars. The main core in his army was Turkish soldiers, with Slavic and Germanic masses as well.

After the ending of the East-Roman-Sasanian war, East-Roman army went to Tracia. Under the command of Priskos in 601 they came to Tuna and Tissa river, and defeaded Avar-Turks.

After the dead of Bayan Hakan, the new Hakan took the city Friul over. In 613 East Roman Emperor Heraklius escaped the trap. Avar agreement with Sassanids in 626. Heraklius asks for help from Caucasus Khazar Turks. Avars siege was not successful and they forced to retreat. With this fails Avar Khaganate lost his reputation. After the death of Avar Hakan in 630, Bulgarian Turks arguing about revolving with their leader Kubrat (Kourt-Kurt). Avars put down this rebellion in the Balkans, but north was taken by Bulgar-Turks. After the fall of Avars, foreign tribes abandonment some locations, and Avar-Turks jammed into the circle of competitors in the Hungarian plains. They survived through the 7th and 8th century.

In 791 Frank emperor Charlemagne elaborated Avars. His son Pepin in 796 took capital city of Avars in Hungary. Avars started rapidly erased from history. In 805 they became Christians, and has been ruled by Theodor.

In 795 chieftain titled Tudun of Avar-Turks, was baptized in Aix-la Chapelle,rebelled against Frank domination, but they could not be successful. After him chieftain (başbuğ) Zodan rebelled to, but he surrendered in 803.

Avar-Turks place in East European History Avars dominated the Balkans and Central Europe for 250 years. Of course was a big impact in this area an event of Avar-Turks. With Avars changed the ethnic structure of Eastern Europe. Longobards moved to İtaly, Slavs were brought to Danube, Vistula and Bohemia. Syrian Bishop Johannes says: "formerly they could not get out of the woods, with Avars the Slavs were used to disciplined war horse herds, owner of silver and gold."

Shortly, the result of a systematic displacing of these peoples by Avar-Turks, laid the foundation of Yugoslavia, Czechoslovakia and Poland in ethnic.

In all Slavic language Obor was used for Avars, meaning Giant. Some Turkish political organization words (like Boyar, Ban) is been used by Slavs. Even former religion influences of Avar-Turks, between de Slavic people is to be seen. Even city names; "Navorino" in Greece, "Antivari" in Albania, comes from Avar-Turks.

Avars were also rich in gold, when Franks captured the capital city, they took many gold treasure. Gold treasure of Prostovats belongs to Avars. Nagy Szert Miklos treasure was suggested, that it belongs to Avars, but by Nemeth Gy. work it is been proved that the inscriptions belongs to Pecheneg-Turks. Technical work of this treasure is Avar-Turks style, Symbols (Stamps, Tr;Tamga-damga) belongs to Bulgarian-Turks. (In short; Turks ;) -SB)

Avars maintained their quiver on the right side of the waist belt, they hang the bow on the left side in another housing. The bow consisted several parts, inner side was from bone, also found in Hun-Turks tombs. Avar sword was flat or curved. Stirrup were also brought by Avar-Turks to Europe, and was circular.

Avar-Turks art of war has effected East-Romans. When East-Roman emperor Herakios re-organized the army as Avar army, he prevailed against the Sassanids. In this period East-Roman army was completely similar of clothing and weapons as Avars. In Tactica, emperor mention the formation of the army and clothing.

Avar-Turks bury their deads facing east, and the burial ground from head to feet direction in east towards. Influential persons body were first wrapped in leather, then in sarcophage and buried. For their afterlife journey they put also food in burials. A cavalry were buried with his horse. 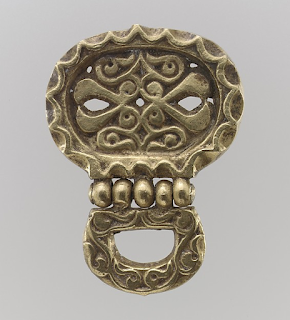 Gold Belt Mount, 8th century, Avar
"the description of the Met museum is = Culture:Avar" . Avar is not a nation name! Avar is a tribe name of Turkish origin. So the Culture must be written as "Culture:Turkish (Avar Tribe)"!
Shame on you Met Museum!!! 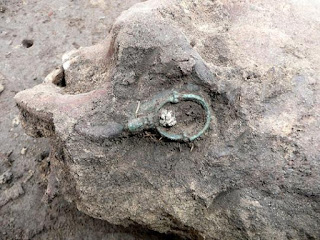 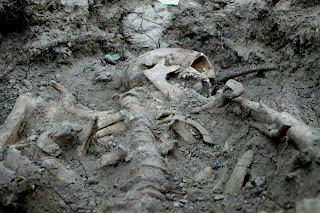 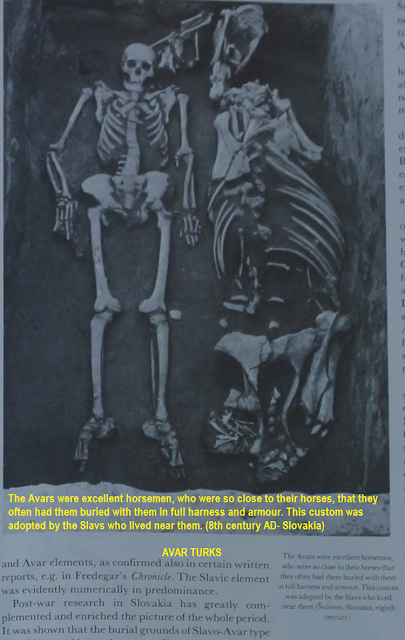 ”The Avars were excellent horsemen, who were so close to their horses, that they often had them buried with them in full harness and armour. This custom was adopted by the Slavs who lived near them. (8th century AD- Slovakia)”

"Avar-Turks bury their dead facing east, and the burial ground from head to feet direction in East towards. Influential persons body were first wrapped in leather, then in sarcophage and buried. For their afterlife journey they put also food in burials. A cavalry were buried with his horse."
Prof.Dr.Ahmet Taşağıl.

Abstract: The Avar period cemetery of Nuštar, situated in continental Croatia, is dated to the 8th and the beginning of the 9th century. Rescue archaeological excavation yielded 196 burials. During analysis of human skeletal remains, an individual with a large cranial lesion caused by trepanation was found. Trepanation is a surgical procedure performed on the skull in order to remove a fragment of the bone using a sharp instrument or drill. It has been practiced in various regions since the prehistoric period for both medical and ritual reasons.

The site of Nuštar is situated in continental Croatia. It was discovered by accident in 2011 during construction works for a new football field. A rescue archaeological excavation was carried out later that year, when a mediaeval cemetery from the Late Avar period (710–830 AD) was partly excavated. The cemetery was only partially explored, leaving the southern and eastern borders undefined. The excavated area was 140 m×100 m, with graves concentrated in the south-east section measuring about 60 m×40 m. Ten fairly regular burial rows with a  total of 196 graves were excavated. Most of them were rectangular in shape, with three major types of grave pits. In the vast majority of graves remains of wooden structures were observed. All burials were oriented West-East [like our Prof.Taşağıl said - SB], while smaller deviations (up to 150) to north or south were recorded. Most of them were single inhumations, with only seven multiple burials present. The deceased were buried in a supine position on their back, with arms laid next to the body.

Over 1500 finds, most of them in very good condition, were discovered in 175 graves. Two main categories of grave finds can be distinguished: traces of food offerings (pottery, wooden vessels and animal bones) and grave goods (dress and personal ornaments, tools and weapons). In general, grave finds from Nuštar belong to a  society which could be referred to as higher middle class. The most common finds were pottery vessels and iron knives. Male graves often had decorative bronze belt sets (but also simple, everyday belts) and female graves usually had some kind of jewellery (earrings, necklace beads, bracelets, and fingerings) or tools (needle cases, spindle whorls). Burials of children had finds very similar to adult graves, suggesting that in the Nuštar community age of the deceased was not associated with differences in mortuary practices. Finds from Nuštar can be easily connected to the Avar period cemeteries from Hungary, Serbia, Slovakia and Austria (Szentpéteri 2002).

Based on grave finds (belt sets, jewellery, tools and pottery) most burials belong to the Late Avar period, but it is possible that some of them belong to the Middle Avar period. In terms of absolute chronology we can define this time period throughout the 8th and beginning of the 9th century. Together with a  number of other sites in the area of today’s Croatia and Serbia, along the rivers Sava, Danube and Tisza, the Nuštar site fits into a hypothetical southern and south-eastern border of the Avar Khaganate from the late 7th to the end of 8th century (Garam 1987; Filipec 2003).

From the year 568 until Charlemagne’s Avar wars (788–803), the riders of the steppes dominated the Carpathian Basin and its environs (Daim 2003). Parts of what today are Austria, Hungary, Slovakia, Czech Republic, Romania, Serbia and Croatia, were at some point integrated into Avar Khaganate. In these regions different elements of culture, ethnicity and social structures, belonging to indigenous, Germanic, Slavic and nomadic (steppe) populations, mixed. Such multi-regional, multi-ethnical and time related mixture resulted in different aspects of Avar period cultural remains, particularly seen in the assimilation of external influences.

The early period material culture (568–690), strongly influenced by the Byzantine Empire [No, not influenced by the East Romans; by the way, at that time the empire was called East Roman not Byzantine; and East Roman was influenced by the Turks. Because the Avars are Turkish Tribe... say the word "Turks" for once! - SB ], is recognisable in metal objects made by pressing. The late period material culture (690–830), often called griffin-tendril horizon (due to mostly used motifs), is recognisable in metal objects made by casting. Unfortunately, contemporary written sources do not provide enough information about the Avar state, society, ethnicity and economy, or the everyday life. Most of the data are obtained from more than 60,000 excavated Avar period graves (more about this subject in Vida 2008). 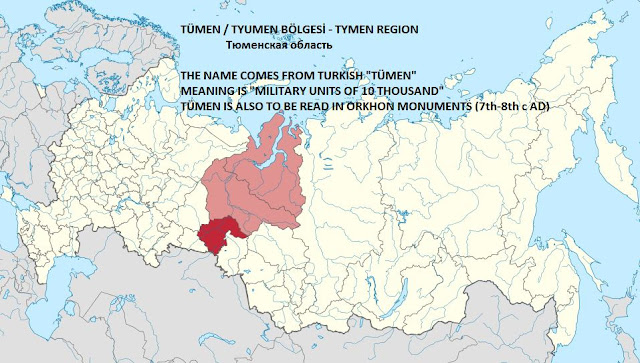 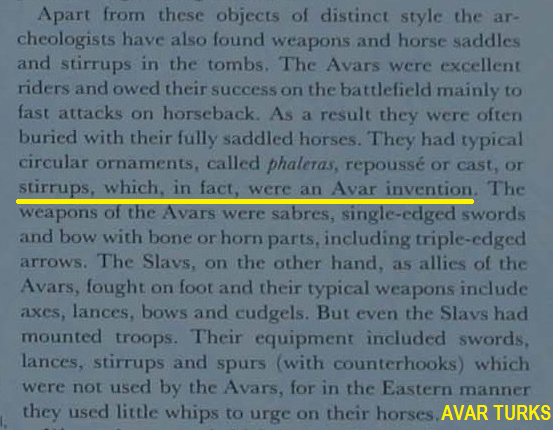 Articles on the photo are from the book “Zdenek Vana - the World of the Ancient Slavs”, not a reliable book…!
Especially about “stirrups Avar invention”…
İt was brought by Avar Turks into Europe, but of course it was invented by the Turks in Asia.

Even the East Roman Empire army had adopted the stirrup from Avar Turks.

Stirrup is in Old Turkish “izanja-üzanji”, in Anatolian Turkish “üzengi”.

"The Avars have many different names like Obors, Vars, Pars, in Roman times as Partians.
Their ethnic group united with similar Scythian elements. ...
All Turkish peoples, Uighurs, Kök-Turks, Ottoman Turks, belong to that central group of Eurasian humanity
which we are calling Scythian."
Dr.IDA BOBULA (1900-1980)
ORIGIN of the HUNGARIAN 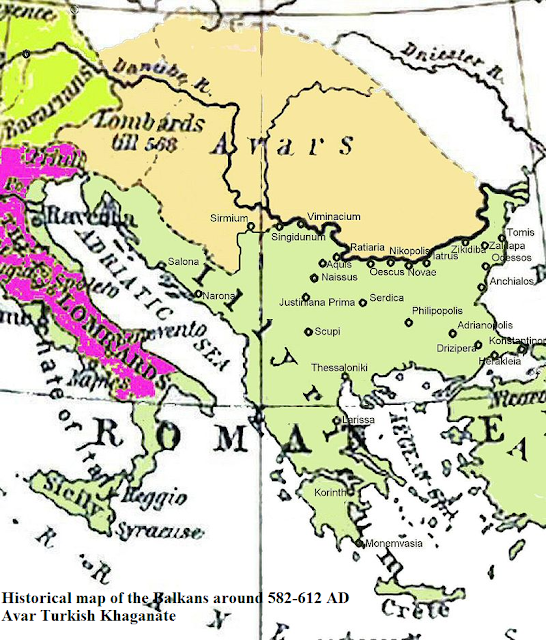