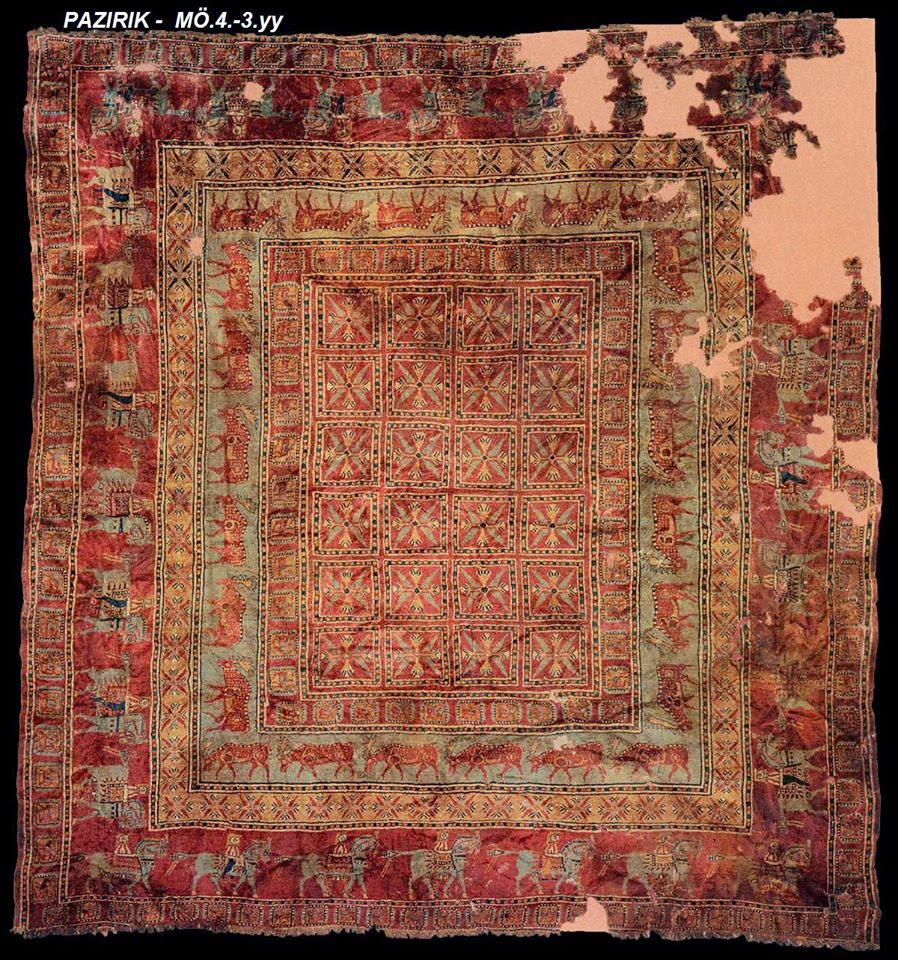 The ancient Altaic Turkish called this burial mound Pazyryk, thanks to the fact that this carpet had been inside the glacier for 2500 years, it managed to preserve its original colours and wasn't damaged. It was made for a Turkish Hun / Saka ruler in the 5th c BC.


These carpets can tell us about Turkish culture and history, the feelings, emotions and communication of the weavers and nations is in carpets and rugs. It is impossible to find two identical carpets, every woman have her own individuality and patterns.


Huan Tes-ank a Chinese traveller wrote in his memoirs in the 7th c : "Azerbaijan is the biggest centre of carpets weaving". In the 12th c in Azerbaijan there were palasses-naples carpets woven with silk, woolen or cotton. Beginning from the Middle Ages Turkish carpets went out to the European markets through the Great Silk Way , exciting admiration of the western people. They liked them so much that the famous painters of Europe made the carpets the effective ornament in their work. 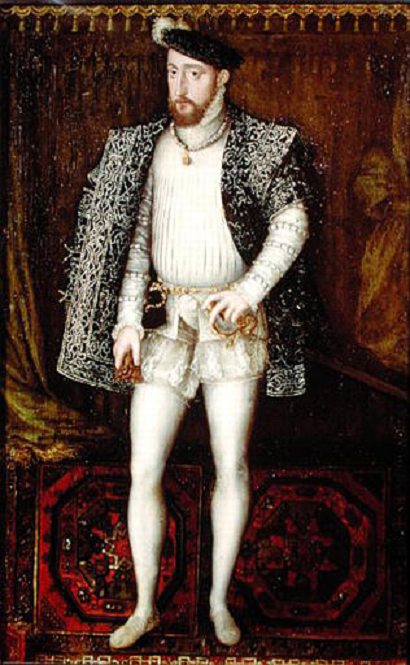 Portrait of Henry II standing on a Turkish carpet (also known as Holbein) with Hun Roos
by François Clouet. 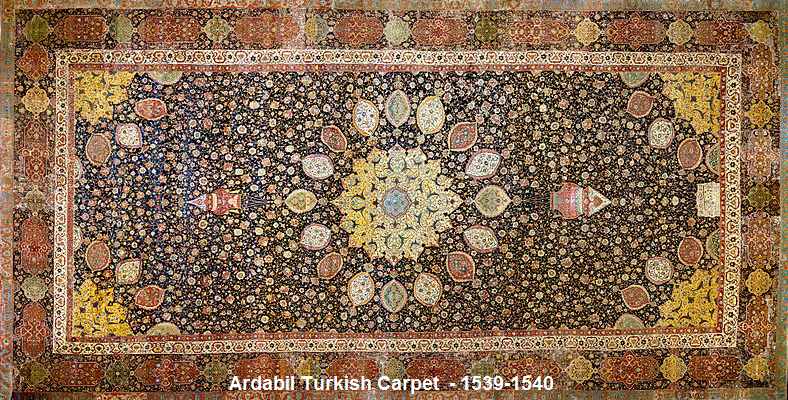 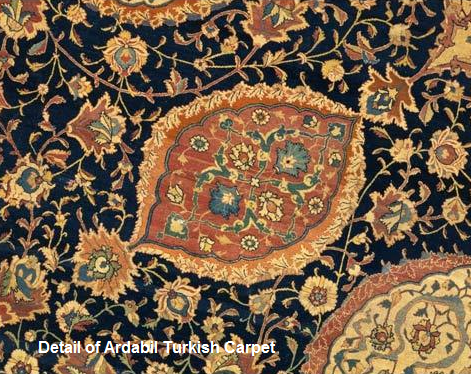 The carpet "Sheikh Safi" which is being kept in the Victoria and Albert Museum in London as Ardabil Carpet ( info of the museum is Iranian, but it is not İranian, it is Turkish! I condemn these scholars!) , was woven in Tabriz in 1539 on order of Shah Tahmasp (Şah Tahmasb) for Ardebil Mosque (Erdebil Cami), and was bought by an English in 1893.


This carpet reflects the ideal harmony of colour and configuration. According to historical sources Shah Tahmasp, the ruler of Safavid dynasty which is Turkish dynasty; he was the son of Shah I.İsmail (Safiyüddin- “Pīr-i Türk”) and Halime Begim (Uzun Hasan- Akkoyunlu-Whitesheep), both of them are Turkish of nation; drew the skeches of carpet himself, even Nasreddin Muhammed Humayun (Nasireddin Muhammed Hümayun, son of Shah Babur, second ruler of Mughal Turkish Empire), who found temporary refuge at Shah I.Tahmasp's place in 1554, was so carried away by the carpets that he took several skilled carpet weavers with him on coming back to his country. Some time later they became famous in India as "Turkbaks" that is "Turkish masters". 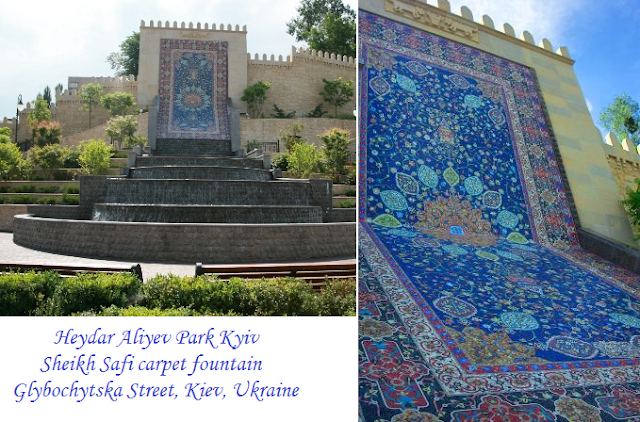 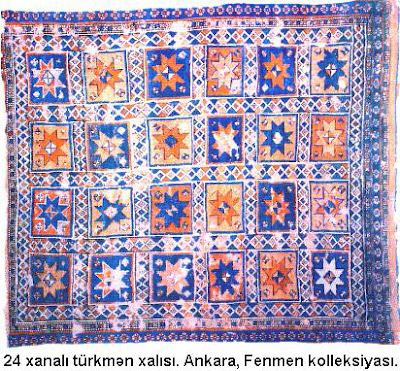 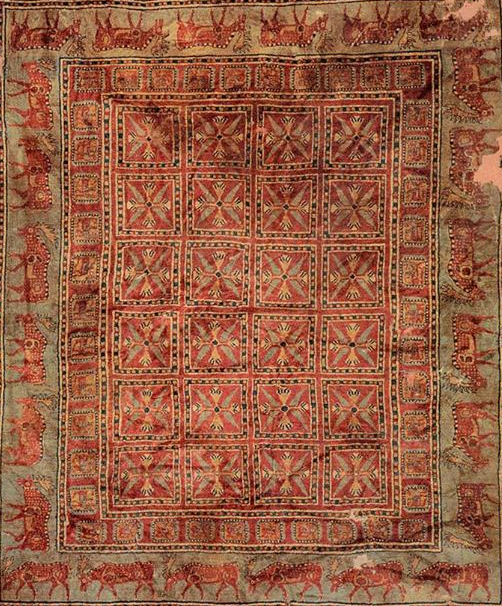 There are 24 segments in the centre of carpet which symbolized 24 well known tales of Huns from Mete times and Oghuzes in different "Oghuzname" as well as 24 local rulers from "The book of Dede Korkut". 24 war horses with tails tied in a knot galloping opposite the deer guide the mortal way. And 24 deer indicate 24 life and mortal hours of one day. The weaving type is double knotted, Turkish Knot, which is also called as "Gordion Knot".

Gordion is the capital city of the Phrygians who lived in Anatolia (they are not Greeks) and the knot that was cut by Alexander (he was also not a Greek) , is the knot that we see in the oldest Turkish carpet Pazyryk.


Phrygians artifacts are mixed with Kaška's artifacts. Kaška's are Scythian tribe (by the way, Scythians, Saka's and Huns are the ancestor of today Turks).  It is very difficult to seperate the two cultures. In the last period of the Hittite Empire, on the eastern border in Pahhuwa, a Kaška city, seems to emerge a rebel named Mita. This person is referred to Muškian Mita in Assyrians tablets. Muškians are also a Scythian tribe. The -uš- etymology brings connection with -uš- in Kaška. With the end of Hittite Empire comes the period of the Phyrigians and so brings Mita us to Midas....And Gordium is to explain with Kördüğüm in Turkish (blind knotted - Gordium - Gordugum - link) .


There was also a god named Sabazios, in Turkish -Saban- is -plow- "golden black plow" legend belongs to the Scythians...."Golden objects fell from the sky Saban (plow), Ternary (sword) and Yoke (used between a pair of oxen) and a bowl ".... Saban is a Turkish tribe, named as Sabar, Savar, Subar, Sibir (Subarian, Avar, Chuvash, Siberian Turks, which the name Siberia as geographic comes from them).

Sabazios was the god who was protected by mother goddess Cybele. He was always on horseback, a nomad, god of beer and barley, later we see him as Dionysus. He was also an Anatolian god, an eastern god. The Greeks pantheon of gods didn't accept him at the beginning, he was birthed from Zeus for the second time to acceptance. Mother goddess Cybele protected him too, he teaches how to "plow with an ox" . Sabantui Day is a harvest festival....


The bowl is an oath cup in the hands of Taşbaba's (statues of Turkish leader-Tashbaba), also a ensign/coat of arms of the Mamluk Turks, became "holly grail" in 12th c AD.


The sword became Excalibur of Arthur : even the name comes from Xalub, a Scythian tribe, who lived in the north of the Hittite Empire in the same period. Scythians worshipped the sword god (later in Greek and Roman pantheon Mars/Ares- Greek mythology has occurred in the 8th c BC. When Scythians came to Anatolia they had already a pantheon of gods) The legend of Excalibur is from the 6th c AD. (link) or (link)


And if we can see the chronology of the Scythians/ Saka's, Huns, Avars and Pechenegs who was in Europe, we can make connection between Phrygians and Scythians and all the legends. It is more understandable if we know the earliest history of the Turkish people.


We are all connected, thus if you underestimate Turkish Culture and History, you can't write World History.
Regards,
SB 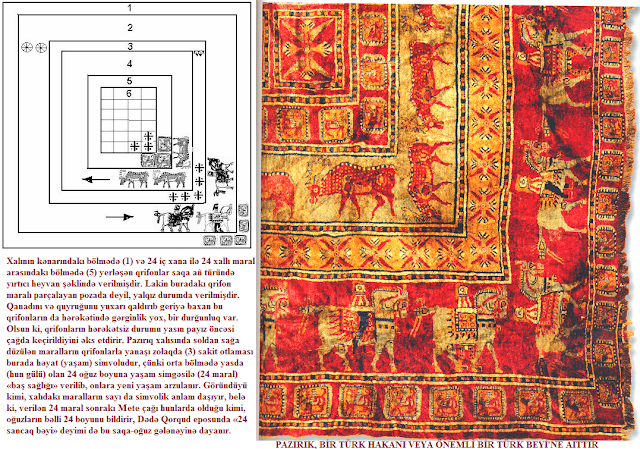 Hun Turks have 24 tribes/clans, and Pazyryk carpet have 24 "Hun Flowers" in the centre. Oghuz Turks are also 24 tribes. Huns-Saka (or Scythians)-Oghuz are related, that's why some Turkish scientist called also as Saka-Oghuz Carpet.... more to read : Prof.Dr.Firudin Agasıoglu Celilov :


In eastern Siberia, at the source of the Obi River, in the frozen tumuli on the Pazırık (Pzyryk) Plateau at 3500 m in the eastern Altay Mountains, ancient Turkish graves containing clothing, belongings and horses have been found. The name of this very valuable tumulus area is "Pazırık", in Altay Turkish dialects it is "Pazırık" which means "buried treasure". In Kırgız (Kyrgyz) "Basırık" means pressed, compacted. (Prof.K.K.Yudahin, translated into Turkish by Abdullah Taymas, Kırgız (Kyrgyz) Dictionary, TDK publications, Ankara 1945)

In my studies in this areas, the locals in the provinces of Ardahan and Kars, Ağrı (Tutak, Taşlıçay), Sivas and Tokat and in the dialect, they use;
a) "Basırmak", burial (funerals and valuable belongings) Kuy(u)lamak (for radishes-turnips-carrots and grains)
b) "Basırmak", buried, treasure, hidden underground.

Tamgas were the most precious possession of a tribe, clan, or individual, they were heirloom and heritage, and they carried a great legal significance, like today's family name. Marked on carpets, artifacts, animals, branding horses, gravestones Taşbaba (stone statues-leader himself), Balbals (stone statues of enemies) and stone/wooden monuments over the burial kurgans (tumulus, barrows, burial mounds).


Accordingly, an unjustified use of tamga, by a person ineligible for tamgas, or use of another person tamga was classed as a most grave crime, and persecuted accordingly. All the places were the Turkish peoples went, you can see a Tamga of a family or tribe and these conventions are still observed in the societies which practice the tamga traditions. 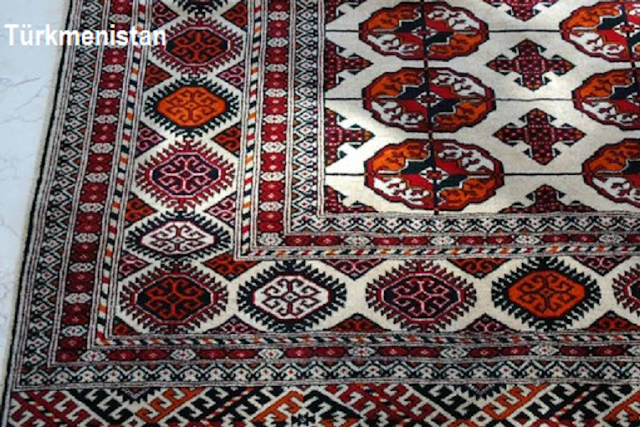 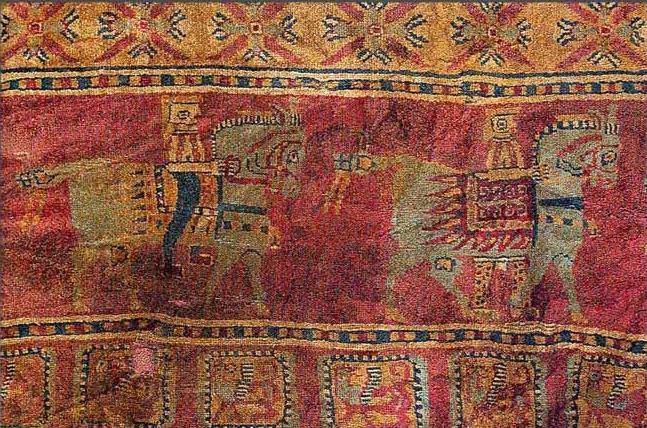 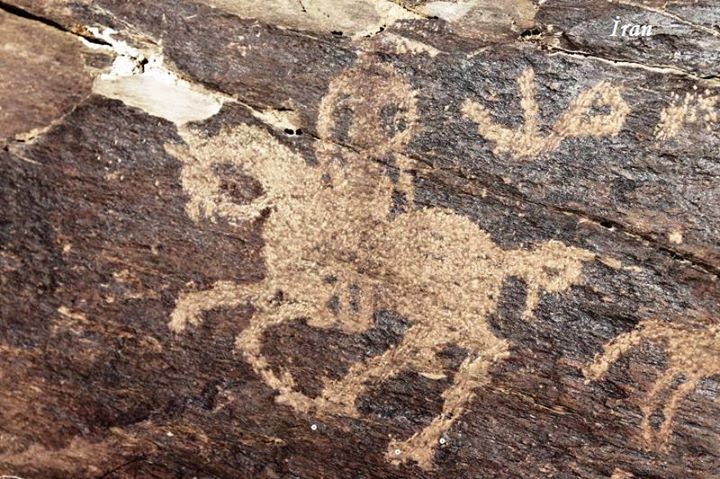 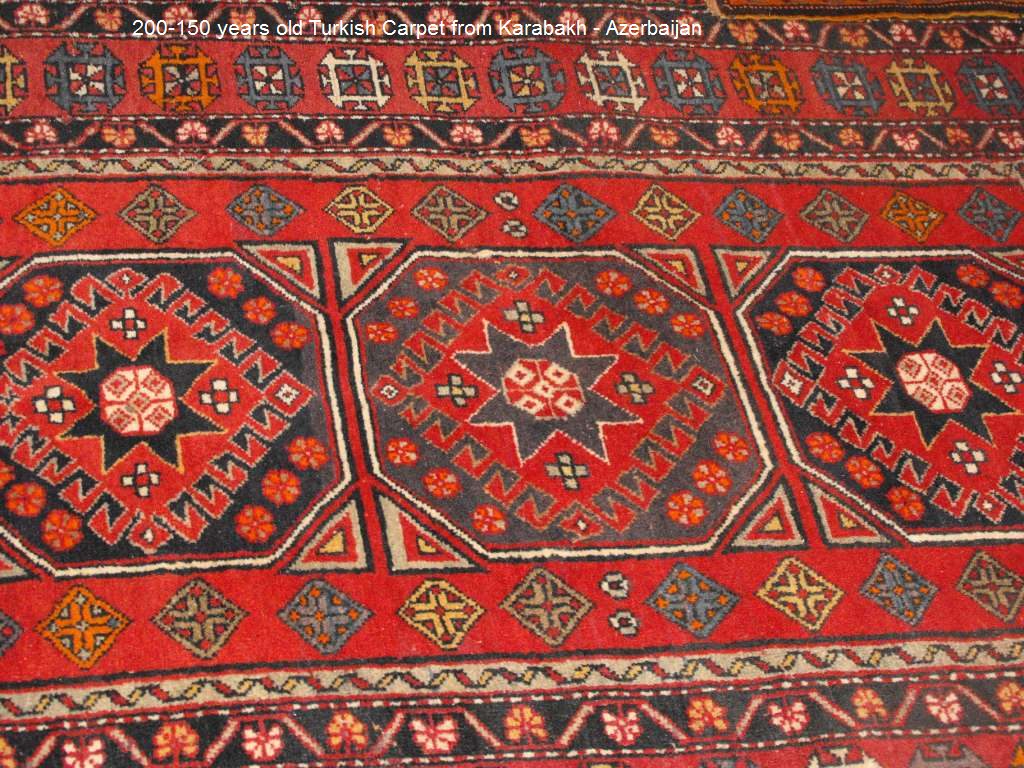 NOT Armenian Artsakh,
BUT Turkish
Karabakh is Azerbaijan Turkishland


For a long time Armenians occupied Turkish lands and they change the names of the land  They even explain  Turkish-Azerbaijan origin names as Armenian.  One of these words is "Arsakh" place name, has been repeatedly proven that does not belong to Armenians...Asak-Sak-Saka-As-Arsak is Turkish....
link

"from the 4th c BC to the 8th c AD the territory of the current Nagorno Karabakh region of Azerbaijan was one of the provinces of Caucasian Albania (Alban Kipchak Turks) , the most ancient state of Northern Azerbaijan. Karabakh has never been a part of the Armenian State until the Armenians captured it by brute force in 1992"