In Turkish mythology and cosmology "Dragon" symbolize the Universe ("Evren"). This became later an expression to use for cosmos.  The word "Dragon" is in old Turkish (Mahmud al-Kashgari) "Büke / Böge" or "Yelbüke", is the origin of the word "Bükmek" (twist), "Bükülmek" (bend). Dragon evolved the Universe, he controls the time; "Infinite Time Cycle", and was the "Time God". Therefore, the Cycle of the Sky was associated with the "Dragon". The word "Evren" for the creature "Dragon" is used today with the word "Ejder / Ajdar".


Primitive human conception was not linear but cyclical. The creation repeated periodical every year; the continuity of the seasons, sun's rebirth, cycle of the moon. That brought the idea of "evolving, turning, timeless, endless great universe"; dragon was chasing his tail... İn Turkish cosmology the Wolf headed Dragon is also the master of the water and air, and the symbol of the state and sovereignty. 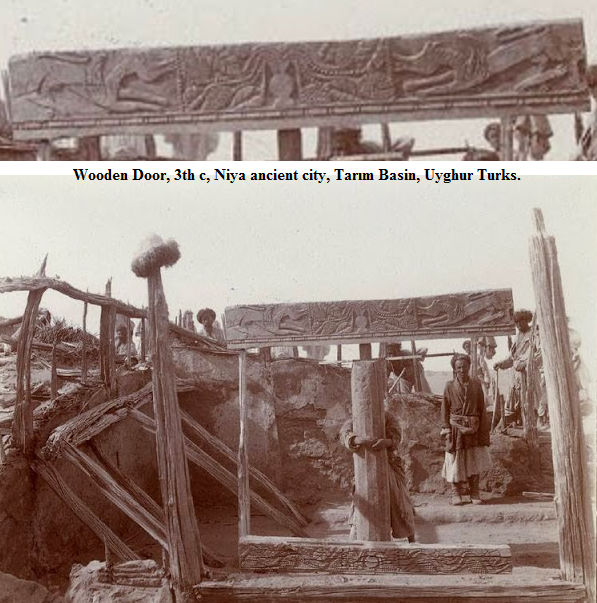 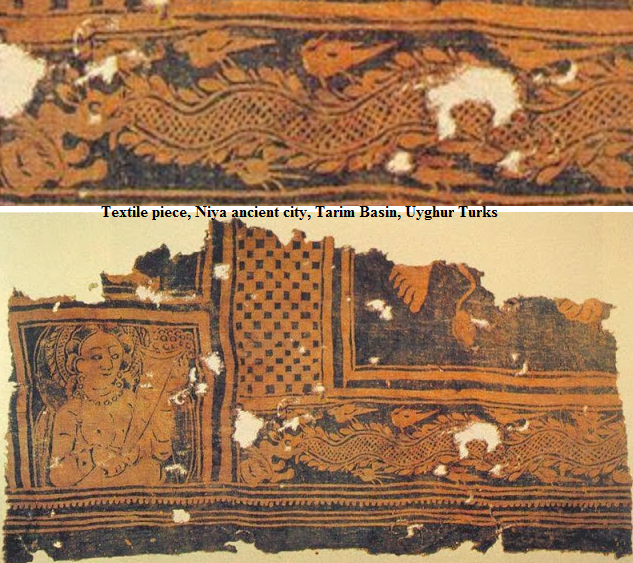 
"Wolf-Dragons" was popular among Gokturks (see Bugut Monument, 7th c), Seljuks and Artuqids. But when it comes for giving info about it, always separated with "tribe names", and never used as "Turkish Culture & Art" in museums or articles. Which leads to confusion among peoples who does not know what Seljuks, Artuqids, Safavids or Mamluks are! /(They are just dynasty names, but Turk of ethnic). On the otherhand, a huge art-culture emerges when we combine the arts under "one name" as "Turkish Culture & Art", which was separated with "tribe names". But when it comes to  "Greek" or "Roman" Art, "they" (scholars, museums, etc...) combined all the "tribes" under "one name" !. That's just hypocrisy... 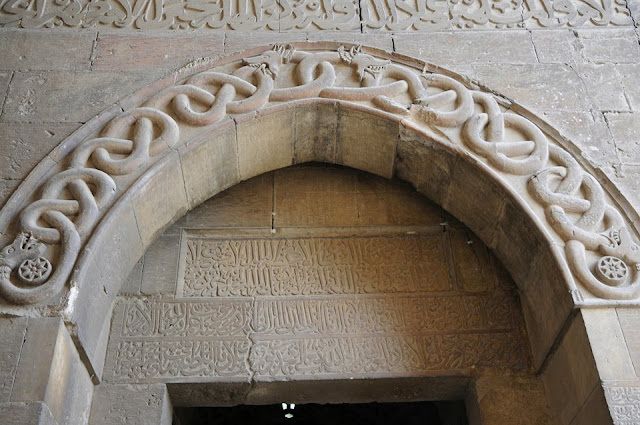 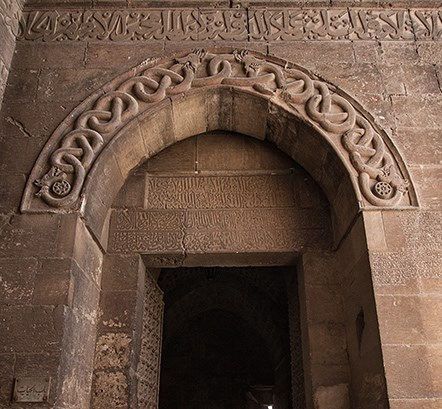 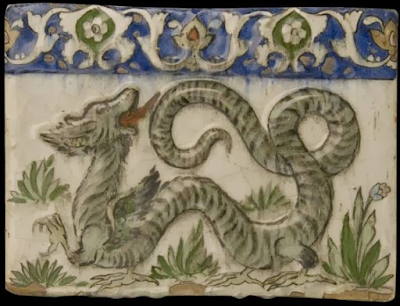 Me personally (and some) do not use the word "Turkic", because of the meaning: "The Turkic peoples are a collection of ethnic groups that live in central, eastern, northern, and western Asia as well as parts of eastern Europe. They speak languages belonging to the Turkic language family".

This is wrong expression, especially "collection of ethnic groups", because they are TURK of ETHNİC, and not some strange ethnic groups who came together.

Among us it is; "Siberia Turk (Sibirya Türkü)", "Altai Turk (Altay Türkü)", "Kazakh Turk (Kazak Türkü)" , "Uzbek Turk (Özbek Türkü)", "Saka Turks (Saka Türkü)", etc... and not like "Avar Turkic", "Kazakh Turkic", or "Turkmen Turkic", etc. ... The world is confused about the tribe names, they think that the "tribe names" are in "different ethnic". It is saying like; "Black American and African American" it is just simple "African", or saying like; "American English and England English", but it is just "English". This description applies the languages too: for example; "Kazakh language" or "Azerbaijani language" - There is no Azerbaijani or Kazakh language, both are talking in Turkish - dialect, but Turkish - just simple is that. Given different names "separate the ethics", which are "the same people, same ethnic" ..

Example: Huns and Oghuzes have 24 tribes and many subgroups, like Ağaçeri Turks (Tree people: in ancient times as Agathyrsi, a Scythian+Hun tribe); or Oghuz tribes like Kayı (Ottoman comes from); Kınık (where Seljuk Turks comes from).... but all of them are TURK of ETHNİC. And many of these Turkish Tribes live in Turkey, and that's why it is called only "Turks". In Dutch they called as TURKSE VOLKEREN; the meaning is TURKISH PEOPLES, and that is one of the right expression.

They do call also as "Islamic", but religion is spread among differend nations. You have under "İslam Art" : Arabic Art, Persian Art, Malaysian Art, etc.... and you have of course Seljuk, Mamluk and Ottoman, but they are as İslamic represented by some scholars and in museum explanations. Somehow, determination of the political identity of the Turks is "Islamic", or with false ethnic identity, which is wrong...

So the art and culture must be written as "TURKİSH CULTURE AND ART", then with their dynasty, tribal or clan name but not as Turkic. So can the rest of the world understand in which ethnic these art and culture belong to...And yes, Hungarians and Turks are related. We are A Huge Family :) 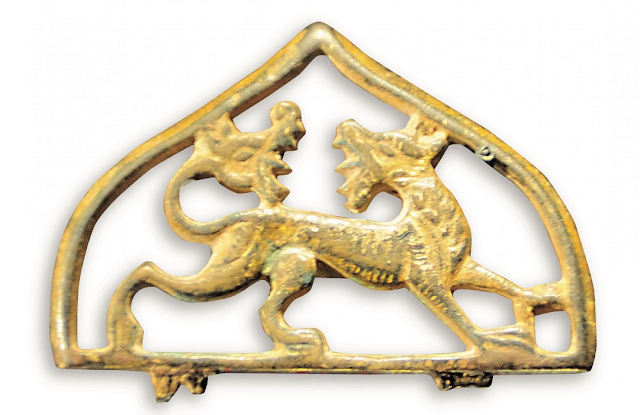 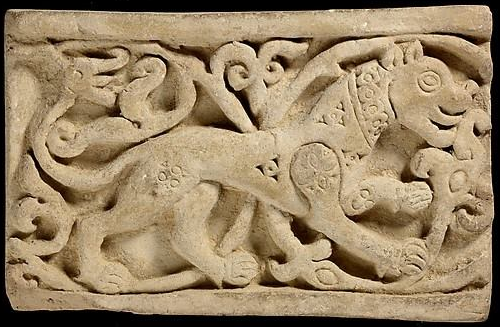 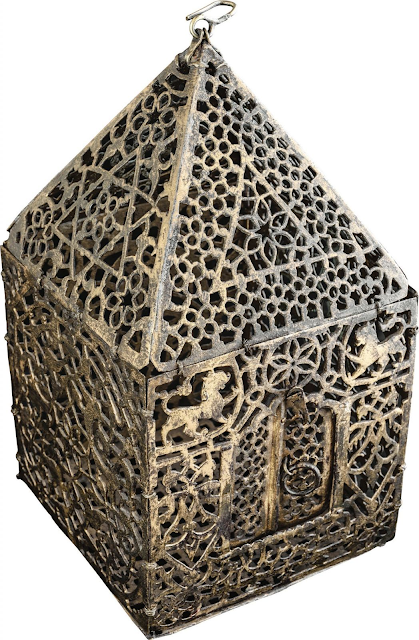 Double-headed eagle with pointed ears, in heraldic posture on both sides. Lions with a wolf-dragon head tail. Opposite the lions are two wolf-dragons with knotted bodies and heads turned back. And "Davids Star" is not "Jewish" of origin!
Was used by the Saka (Sacae-Scythian)-Turks in the 8th c BC, and Asian Hun-Turks (there was no Jewish  people)
as a letter or "tamga (symbol)" in the 1st c BC. 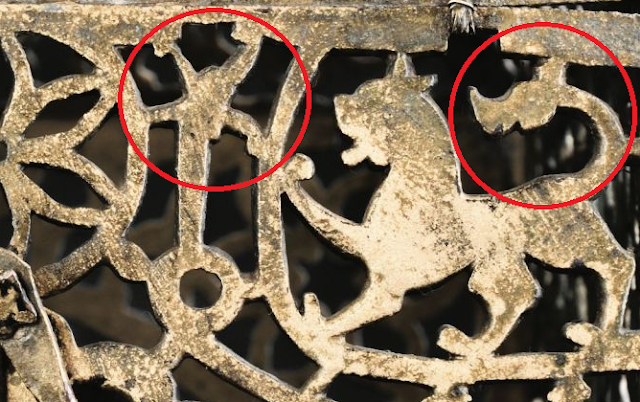 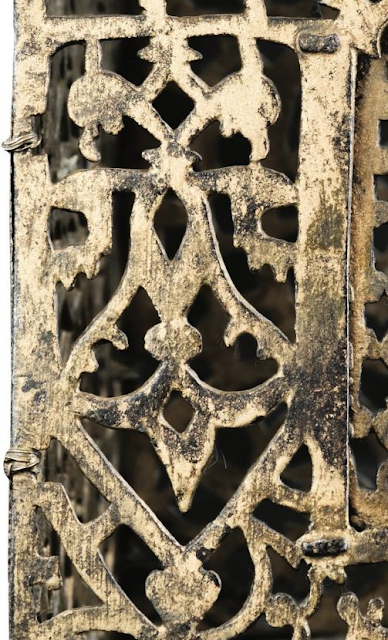 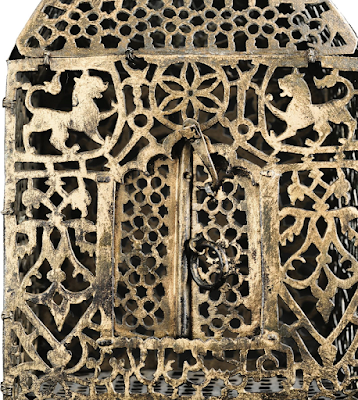 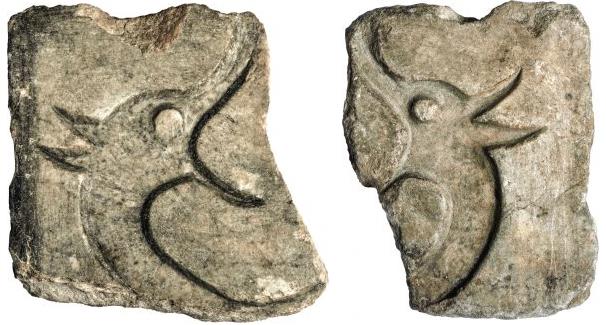 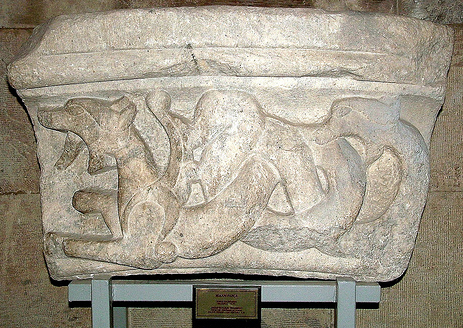 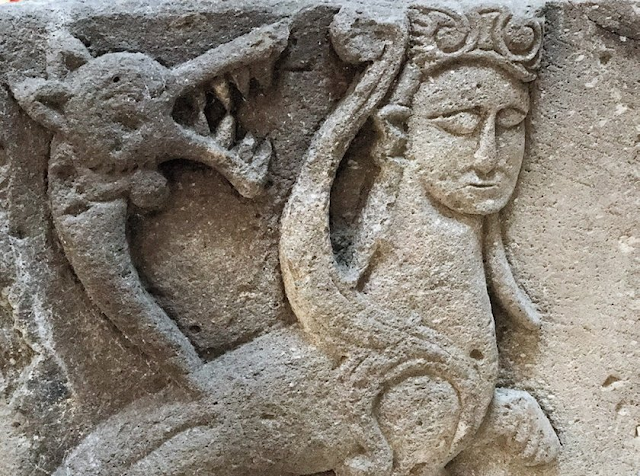 A Reminding!
Do not promote or use other people's culture and art as your own!

Cover of the book "History of Georgian Art", but this is not a "Georgian Art" it is Turkish Art & Culture.
This is simply a "forgery" !...
center: Seljuk Turks - 12th-13th c; right: Artiquid Turks - 13th c
* Arabic inscriptions does not mean; it belongs to "İslamic, Arabic or Persian Art!"
And this "shot" is actually "Turkish Shot" and not "Parthian Shot", "culture on art" continues among Turks.
"Parthians" are also a Turkish tribe. 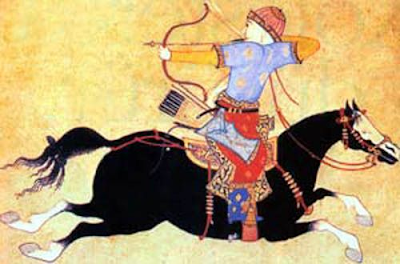 Turkish archery, escapes in front of the enemy, while galloping he turns back and shot the arrow. A war trick that was used among Turkish tribes. Turks lived on horse, sleeps on horse, traveled on horse, fights on horse, and they where seen as one: "Horse-man".... So, they create "Centaurs"... Like the Cimmerian and Scythian Turks... 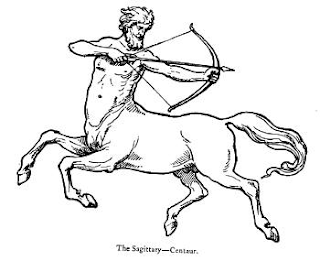 European Archers record ;300 m.
While a Turkish Archer could not have been nominated in the Ottoman Empire if it is not 600 meters.... 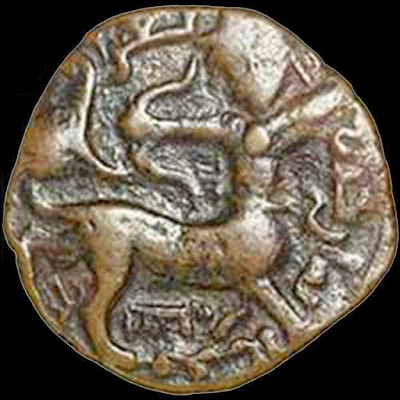 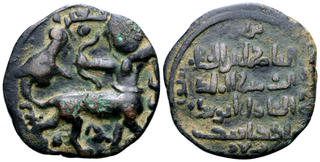 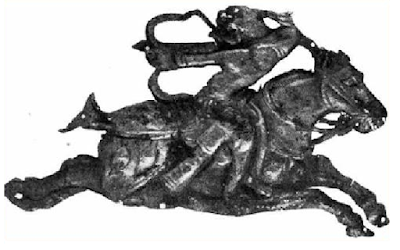 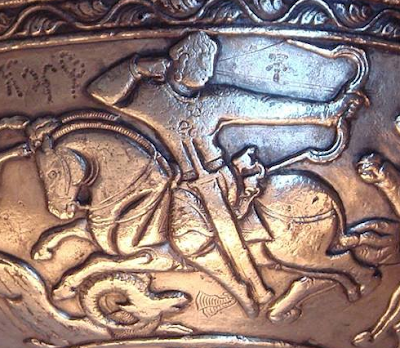 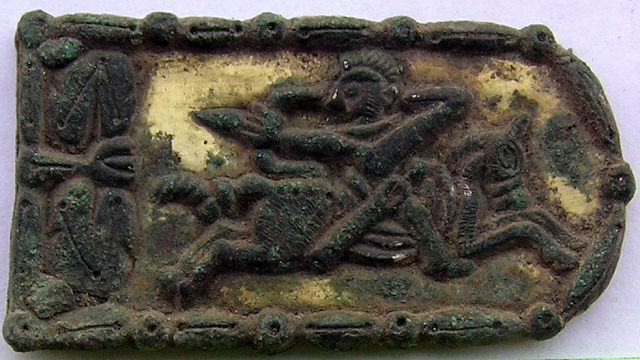 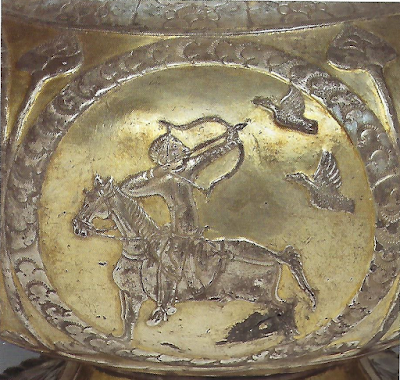 A Khazar Turk on hunting (detail from a pot) 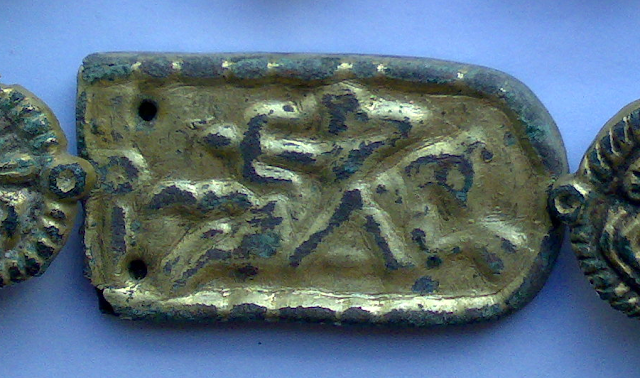 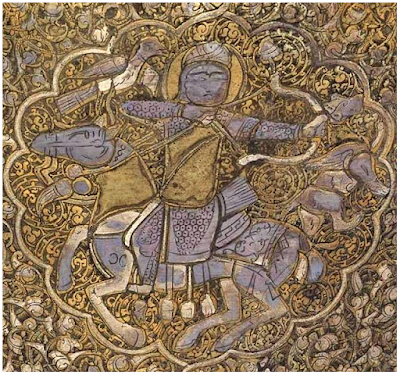 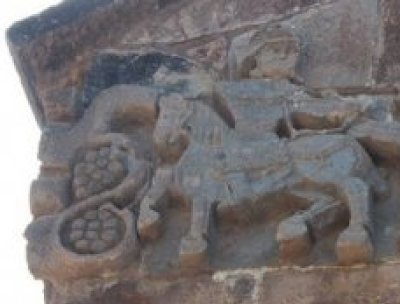 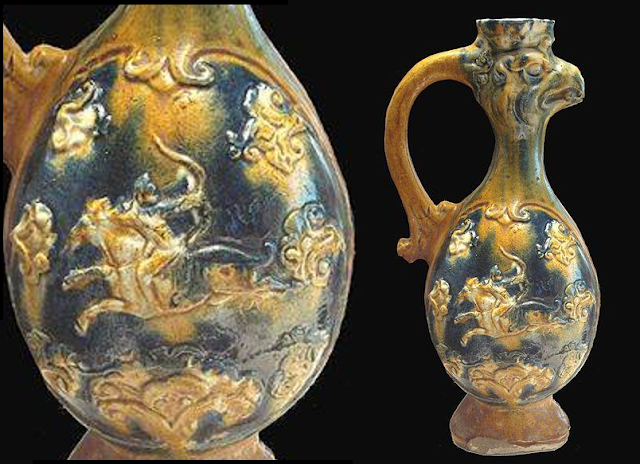 A Turkish Warrior; Tang-Turk period, 7th c, "Turkish shot" and his "Horse with Knotted Tail".
Not a phoenix, but a rooster, and not "China Culture" as the museum says! Look for Seljuk Turks "Rooster shaped Vase"
(The word " T'u-küe " in Chinese sources is the word " Turk ".) 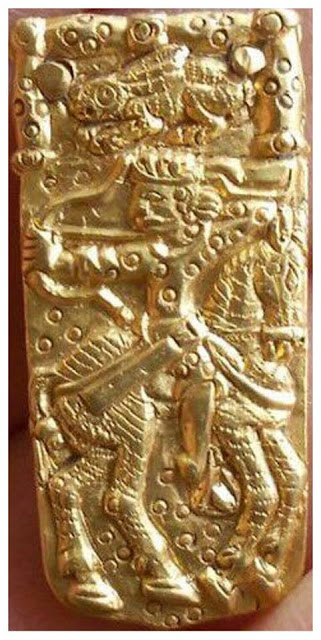 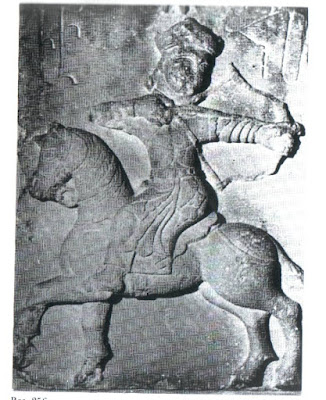 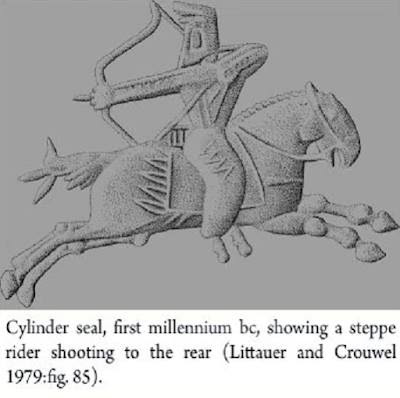 A Turkish warrior with his horse "knotted tail", "Turkish-Shot", cylinder seal, 1000 BC
Those who do not want to admit that the "Parthian Shot" (and Parthians) is a Turkish tradition (and tribe) show immediately this picture. However, it writes "Steppe Rider" in the text above, and according to the fact, the Assyrians are not "Steppe Riders", neither are the Persians! (Persians are also to be seen first in 800 BC).
Maybe Mongolians were in 1000 BC in Mesopotamia !!! :D :D
Because of the date (1000 BC) can not be named as "Parthian Shot",
Parthian name came first in the 3rd c BC on the records.
Three thousand years of Turkish culture and continuities in art ...
SB 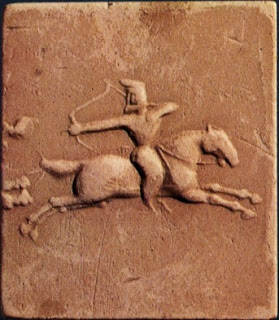 Not "Turkic" or "dynasty-tribe name", more accurate name to use is the "surname": "Turks" "Turkish", so...
Turkish Culture & Art