The Smyrniote Crusades and The Turks

UMUR BEY of AYDIN DYNASTY: "THE LION OF THE SEAS"

"Season of the Witch - Nicholas Cage" is just a film, a fantastic/sci-fi film yes, but there is a truth in it!.. Which these types of movies work on subconscious...

The story in the film: "In the 14th century, Teutonic Knights Behmen von Bleibruck and Felson are engaged in a crusade, taking part in several different battles throughout the 1330s and eventually taking part in the Smyrniote crusades. After witnessing the massacre of civilians during the 1344 capture of Smyrna, the two knights choose to desert the Order and the crusade and return to Austria."

Who were those peoples, that was massacred in Smyrna then?.. The TURKS of course....

The Smyrniote Crusades (1343–1351) were two crusades sent by Pope Clement VI against the Emirate of Aydın under Umur Bey (BEY=Mr.,sir, lord, gentleman) which had as their principal target the coastal city of İzmir (Smyrna) in Asia Minor. Umur Bey was called "The Lion of The Seas".

Principality of Aydin - Aydın Dynasty (Aydınoğulları Beyliği)
Its capital was at first in Birgi, and later in Ayasluğ (present day Selçuk), was one of the frontier principalities established in the 14th century by Oghuz Turks after the decline of Sultanate of Rûm. It is named after its founder Aydınoğlu Mehmed Bey.

Especially during the reign of Umur Bey (Umur Paşa/Pasha, Umur Gazi) , the sons of Aydın were a significant naval power of the time. The naval power of Aydin played a crucial role in the Byzantine civil war of 1341–1347.

Umur Ghazi (GAZİ=Veteran) was a loyal ally and friend of Emperor John Cantacuzenus of the Byzantine Empire , and provided him with material aid during his military campaigns. Umur was killed by a barrage of arrows, climbing the walls of Smyrna Castle during a recapture attempt and the raids of the Crusaders stepped up in Izmir. Modern İzmir's district Gaziemir (Gazi Emir/Umur became Emir) is named after him.

Umur Bey overland his ships in Corinth 115 years ago, before Mehmed the Conqueror overlanded his galleys in Golden Horn / İstanbul. The harbor of the Golden Horn was blocked by a boom chain and defended by twenty-eight warships. Mehmed transported his lighter warships overland, around the Genoese colony of Galata and into the Golden Horn's northern shore; eighty galleys were transported from the Bosphorus after paving a little over one-mile route with wood.

Besides that İstanbul was conquered by the Ottoman Turks, other Turkish tribes as; Scythians, Cimmerians, Huns, Avars, Pechenegs, Bulgarians and Khazars (even emperor Leo IV was a halfblood Turk- "The Khazar"), Seljuks, Mamluks, Abbasid Dynasty; had surrended İstanbul, or lived in the city before the Ottoman Turks...(Ottoman, Seljuks, etc.,a are not an ethnic name! it's a family or tribe name, the ethnic is Turk) 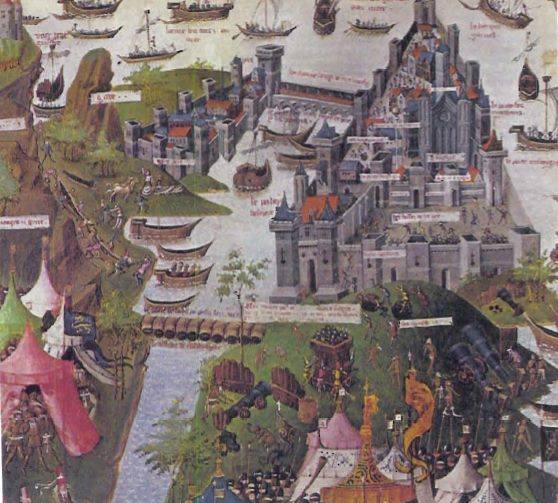 On the other hand, the West use Greek and the Greeks use Hellens as their nation name...

In 800 AD Holy Roman-German was built, Charlemagne was crowned as Roman Emperor, officially rejecting the Eastern Roman Empire as true Romans. But the emperor in Constantinople says " the owner of this title is me".

At this point Charlemagne use the word Greek, as in 200 BC. when the Romans take over the land Greece, they called them "Greek", meaning "Slaves" " Servants" ... So, Charlemagne began to use "Greek" for the East Romans. The West claims that as his legal heir and the emperor was known as "Imperium Romanum" and the East as "Emperor of the Greeks" and their land as "Greek Empire" "Imperium Grecorum." This meaning "Slave" of "Greek" , was in the old edition of the books, but Greece went to court, and new editions doesn't have this meaning anymore.

"The idea of Byzantium remained contested : for J.B.Bury, quite simply, no "Byzantine empire" ever began to exist; the Roman empire did not come to an end until 1453. Byzantium was not classical Greece; it could not easily be accommodated either by romantic Hellenists in the eighteenth and nineteenth centuries or by classicists since....." Byzantines by Averil Cameron 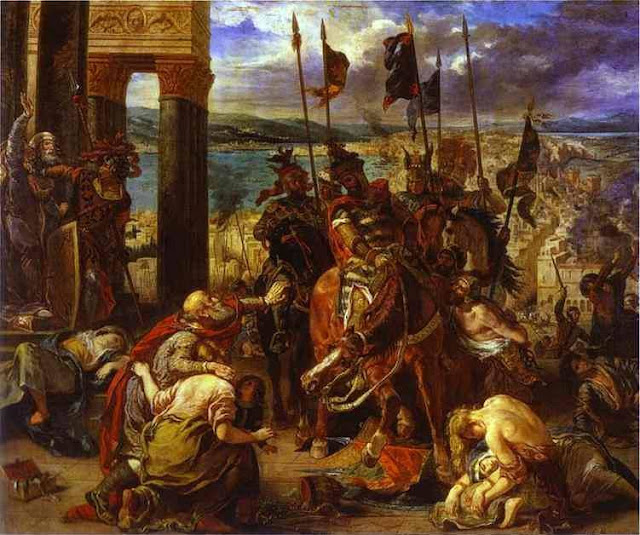 The Entry of the Crusaders into Constantinople
by Eugène Delacroix, 1840

The most infamous action of the Fourth Crusade was the sack of the Orthodox Christian city of Constantinople.
But today nobody speaks about the "The Catholics plundering The Orthodoxes"....

"There is no doubt that many important events occurred during the long history of the East Roman Empire (Byzantine) lasted more than a thousand years. In these events the tragedy in İstanbul in 1204 has a special place. According to some Byzantinists this date is considered as the date of the actual fall of the East Roman Empire and the beginning of the Post-Byzantine period. (...) East Roman Empire was not called till the 16th centuries as Byzantine."

Salute to the truths,
Semra Bayraktar

From Pazyryk to Gordion, The Turks
Turks in Blacksea Region in BC Times
Turks in East Roman Empire
History without or within the Turks?
Türkler ve Denizcilik - 1/3