Modern Urdu is the national language of Pakistan and is also spoken by many millions of people in India.


Urdu language (6th to 13th c) developed more during the Delhi Sultanate (1206–1526) and the Mughal Empire . "Urdu" itself is derived from the Turkish word "Ordu (army)" or "Orda", from which English "Horde" and Latin "Orde - Order (arrenged) - ōrdō (line of soldiers; band, troop)" is also derived from.

* Delhi Sultanate 1206-1526 : The Delhi Sultanate was a Muslim Turkish kingdom that ruled over large parts of India for 320 years. Five dynasties ruled over Delhi Sultanate sequentially, the first four of which were of Turkish origin and the last was the Afghan Lodi. The Lodi dynasty was replaced by the Mughal dynasty which was also a Turkish State.

* Mughal Empire 1526-1858:  Babür in Turkish, (the Baburnamah, a autobiographical memoir of Babür, is familiar), called Mughal in Persian language after Mongolia; called also as Turkish-Mongolian Dynasty.


Babür Şah (Babur Shah) was the son of Chagatai, son of Genghis Khan. Genghis Khan belonged to a Turkish tribe Börçegin (Börte Tekin = Borjigin = Blue (Sky)-Grey Wolf), and that's why some Turcologist claim that he was Turkish. His born name was Temujin (Temuçin) . Genghis Khan had many traditions accepted from Turkish culture and had many Turkish tribes, soldiers and consultant in his empire. It was difficult to seperate the Mongolian and Turkish language till the 13th century.


This Turkish belongs to Karluk Turkish family, a Turkish tribe who fled from Genghis Khan to Alaska, and became a Native American. (Karluk tribe is also one of the other tribes, who established Karahanli Turkish State, the first state who accepted the İslam, 840-1212).


Karluk Turks was also among T'ang Dynasty :"Four Karluks (+tribes) from the region of Lake Balkhash (Balkaş), sent to Ch'ang-an (T'ang) by the Uighurs in 822" [Edward H. Schafer-The Golden Peaches of Samarkand: A Study of Tʻang Exotics]


An other Turkish Art is the Taj Mahal. Built by the students of Mimar Sinan (Architect Sinan from İstanbul, 1490-1588, also known as the architect of the bridge in Mostar Bosnia) between 1632-1652, in order of Shah Jahan (Şah Cihan) a Turkish-Mughal emperor.

The word "order" (arrenged) is derived from "ordo-order-ōrdō (line of soldiers, band, troop)" and it is not Latin of origin, but Turkish. Means army, troop, line of soldiers in Turkish.

Info like this:
(Latin, Etymology: From Proto-Italic *ord-n- ‎(“row, order”). "Maybe from Proto-Indo-European" *h₂or-d-)
=  is nonsense!
This means that Turkish langauge was already in ancient times in the Mediterranean Basin !

"A special book should be written about the Urdu language – the official language of Pakistan and certain northern states of India. It is widespread and it is coyly called a dialect of Hindi. However, it is not clear why it is full of Türkic words and expressions. And the phrase morphology is also Türkic. Why very few Indians understand Urdu while any Azeri can easily speak it several days after coming? It appears that Urdu is the ancient dialect of the Türkic language – Oguz dialect. But it is practically impossible to convince linguists of it. And how can it be done since they find in Urdu plenty of Arab, Persian words and… not a single Türkic one? It is an envious myopia"
(tr.note:The Urdu in Urdu stands for Türkic Ordu ~ English horde, so at least one Türkic word exists in the Urdu lexicon). 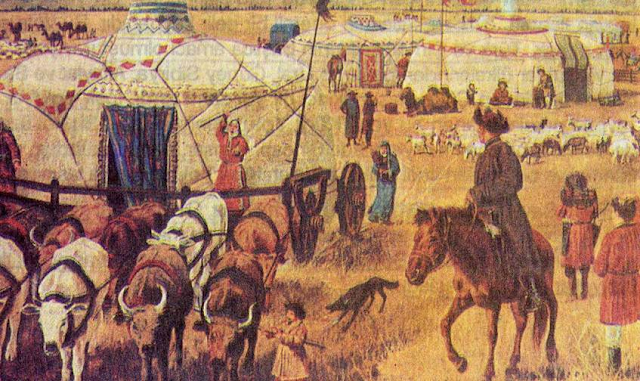 "The word 'otaq', 'sitting room', of the occurs in Shah's poetry. This word of Turkish origin is always used in the Risalo to describe the Divine presence: it is Punhun's place in the Sassui circle, Mehar's placce in the Sohni tale, and is also the high hall where the Yogis meet and inspire those who have come to listen to their songs. (Ram.IX 3-13) as it is now the part of the compound where honored male guests are received by the host. The word was in use already before Shah Latif; it is found in Mian Inat's verse as well, and points to the Turkish influence that was prevalent in Sind from 1520 onward, when the Turkish dynasty of the Arghun, descending from Afghanistan, overcame the last indigenous Sindhi rulers; they themselves were followed by the Turkish family of the Tarkhan under whom Sind fell to the Mughal Empire. The connection of the word 'otaq' with the dwelling place of the ruler is spiritualized in Shah Abdul Latif's verse, but expresses well his idea of God as the King and Lord par excellence."

* The meeting place in every village was known as 'Otaq'. But Otaq means ('Otağ' =Tr.), Ruler tent, house of Turkish nomads. Many use the word 'yurt' for that, but it is wrong. [OTAĞ. yabancı dile yanlış olarak giren YURT, ki o da Türkçe'dir.]

* The Tarkhan dynasty (Urdu: سلسله ترخان‎), or Turkhan dynasty, was established by Turkic Tarkhan and ruled Sindh, Pakistan from 1554 to 1591 AD. General Mirza Isa Beg founded the Tarkhan dynasty in Sindh after the death of Shah Husayn Arghun of the Arghun dynasty. Mughal emperor Akbar annexed Sindh after defeating the last Tarkhan ruler. 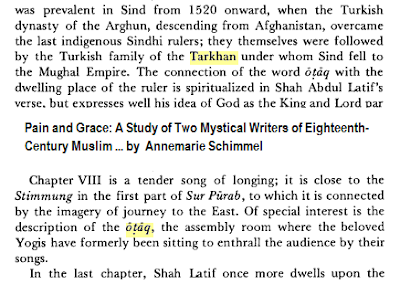