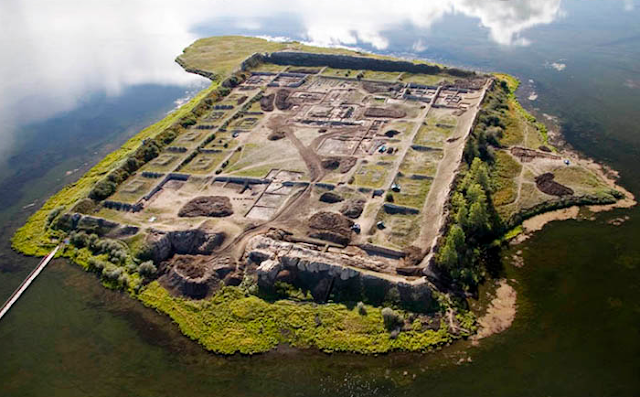 
Por-Bajin occupies a small island in Lake Tere-Khol, at 2300 m above sea level in the Sengelen mountains of southern Tuva. The site occupies practically the whole island, covering 3.5 hectares. The curtain walls form a rectangle (spanning 215 x 162m), with its long axis orientated east –west. They have survived up to a maximum height of 10 meters, while the maximum height of the inner walls is 1 – 1.5 m. The main gate, with gate towers and ramps leading up to them, is clearly identifiable in the middle of the eastern wall.


The interior is taken up by two large yards, a monumental building on the central axis, and a chain of small yards along the northern, western and southern walls. Construction materials and technologies show that Por-Bajin was built within the Chinese architectural tradition. It was most probably built at the time of Uighur Khaganate which thrived in the second half of 8th and the beginning of the 9th century.


After initial exploration in the late 19th century and limited excavations in 1957 – 1963, large-scale research was carried out here in 2007–2008 under the aegis of the Por-Bajin Fortress Foundation. In addition to the archaeologists, our team included architects, geophysicists, geomorphologists, hydrologists and soil scientists. Prior to the 2007 excavation, the entire island and the remains on it were laser-scanned, resulting in a complete topographical plan (1:200) and a three-dimensional model of the site as preserved (Arzhantseva et al., 2010).


The "fortress" was most probably built on an island which had risen from the lake only one or two centuries earlier. The clay for the walls of the "fortress" may have been taken from the lake bed around the island: detailed depth-plots have revealed a belt of greater depth around the island (Arzhantseva et al., 2010). The "fortress" itself sits on a plug of permafrost, and permafrost is also found everywhere under the shores of the lake, but not under the shallow lake itself. Archaeological and geomorphological fieldwork revealed traces of at three earthquakes which had accelerated the natural process of decay. The first of these seems to have happened already during the construction of the "fortress" in the 8th century, the second, more catastrophic one in the 12th century, well after the abandonment of the site in the 9th century.


The results of our archaeological excavations in 2007 – 2008 cast doubt on the original identification of Por-Bajin as the "palace ... at the well" built, according to a contemporary inscription, by Kagan Moyun-chur (Bajan-chor, AD 747-759) after his victory over local tribes in AD 750 (Vajnstejn, 1963; Ramstedt, 1914). The virtual absence of an occupation layer implies a very short-lived, or not very intensive, use of the site. There is no evidence at all of any kind of heating system that would have made it possible to stay up here in winter.


But traces of repairs and minor rebuilding suggest that the site had been maintained for a certain time. New dendrochronological and radiocarbon dates place the construction of PorBajin in the period AD 770 – 790, meaning that it was built after the death of Moyun-Chur, probably under his successor Bögü (AD 759-779) who had converted to Manichaeism. Por-Bajin belonged to a network of fortified sites on the northern frontier of the Uighur Kaganate (Kiselev, 1957). A Chinese presence at, or influence on, the construction of these sites is suggested by two key observations at Por-Bajin:

(1) the presence of Chinese building materials, such as certain types of roof tiles; and


Seen from the Chinese architectural tradition, Por-Bajin combines the lay-out of the "ideal town", with its axial planning and dominant central building, with that of the "ideal Buddhist monastery", with living quarters along the inner perimeter of the enclosure walls. Lay-out and building techniques of Por-Bajin are closely reminiscent of palaces in the Buddhist Paradise as depicted in T‘ang paintings (Chung-kuo ku tai chien, 1984).


But Por-Bajin shows no evidence of religious practice, be it Buddhist or Manichaean, nor does it show similarities to Turkic funerary complexes. And while its lay-out resembles the known Uighur palace complex of Kara-Balgasun, the lack of an occupation layer and of stationary heating systems indicates seasonal occupation, and perhaps only for a brief period.


The re-dating of Por-Bajin to the reign of Bögü suggests the following, tentative interpretation: originally built as a fortified palace, it was rebuilt after an earthquake as a Manichaean monastery, and then abandoned with the end of Manichaeism in the Uighur Empire after the death of Bögü.


The detailed reconstruction of architectural features was possible because of the presence of a large number of building remains (in particular wall remains and roof tiles), the preservation of wooden remains (particularly foundations) in permafrost and by burning of above-ground features (e.g. of dou-gung details), and by the careful excavation of collapsed buildings. Geophysical prospection played a key role in finding concentrations of tiles which showed the presence of unsuspected buildings (e.g. the galleries attached to the main building). The 3D reconstructions by Vafeev, and later by Schubert (Fig. 1-2), are therefore more than tentative suggestions: they are based on exact planning and measurements of all architectural details in situ, and by their accurate stratigraphic recording (Arzhantseva et al., 2011; 2012).


The outer enclosure of the "fortress" consisted of a curtain wall which was 12 meters wide at the base. Analysis using a cliff degradation model suggests that the original height was around 10 m (Alfimov et al., 2012). The main gate, built in heavy timber construction which had been burnt in situ, was initially thought to have a single gateway. The excavations in 2007 showed that there must have been at least two gateways; further work in 2008 finally demonstrated the presence of three, a characteristic feature of large Chinese gate constructions. Four of the eleven bastions were placed on both sides of the gate, inside and outside the walls. The excavation of the northern bastion on the east wall revealed traces of a wooden fighting platform running along the top of curtain wall and bastions. While the initial inspection of the wall remains suggested the use of mud-bricks or adobe, the excavation soon identified the use of the Chinese construction method hangtu for all substantial walls at PorBajin, outer as well as inner. In this technique, a timber framework made of larch was filled with clay; this was laid down one layer after another, each 10 to 12 centimeters thick, and compacted before the next layer was added.


The main gate opened into two successive courtyards which were connected by a gate. The outer courtyard was devoid of all structures, but excavation showed that the connecting gate had been wider in its first phase, possibly during the building of the site, and was later made narrower and fitted with a gate house in pavilion style, with wooden doors and a tiled roof.


The inner courtyard, thought to be a ceremonial courtyard, held the main complex made up of a two-part central structure and two flanking galleries. The previous excavator, Vajnstein, had already established that the central structure itself consisted of two buildings, one behind the other, linked by a covered walkway, but he had missed the two flanking galleries of the larger, eastern pavilion. Each pavilion stood on its own square platform which had been built up of clay layers and faced with bricks coated with lime plaster. Two staircases led from the inner courtyard up to the eastern platform with the larger building. This was subdivided by wattle-and-daub panels into two halls and a series of smaller rooms. Walls and panels were covered with lime plaster painted with horizontal red stripes low above the floor.


The presence of two layers of plaster of different quality suggests repairs. The tiled roof had been supported by 36 wooden columns resting on stone bases. The building was most likely of the post-and-beam construction characteristic of Chinese architecture of the T‘ang dynasty.


Finds of burnt timber fragments point to the use of the typical Chinese technique of interlocking wooden brackets, called dou-gung. Ramps led down to the two flanking galleries which were roofed, open spaces looking onto the access to the main pavilion. A series of small courtyards ran along the interior of the northern, western and southern curtain walls. Each of these courtyards was enclosed by a clay wall with gates opening into the neighboring yards. All courtyards held a one- or two-chamber structure of similar lay-out and building method. No roof tiles were found in this peripheral zone of the site, suggesting that the buildings here had reed roofs.


The biggest difference between the reconstructions by Vafeev and Schubert concern the main building (eastern pavilion): Vafeev reconstructed it with one level and a high roof, based on the Chinese dyan’ type of building which was in use at the time for palaces and temples. Schubert reconstructed the same pavilion with two storeys as found in some larger temples of the T‘ang period in China. The archaeological evidence of the building, including window frames which may have fallen down from a greater height than ground-floor level, is compatible with the existence of two storeys. Our successful work on the recovery and reconstruction of architectural details demonstrates again the value of close cooperation of archaeologists, geophysicists and architects (and in this case, mathematicians), if possible on site where the evidence is as complex as at Por-Bajin.


* Uighur Khaganate is Turkish Khaganate.
* Tang Dynasty: the lineage of the ruler family was involved with the Turks. 36 of the 369 vezir (todays prime minister) was Turkish of origin.