History without or within the Turks?

The Picts are non-aryan ; non-celtic. The stones of Picts are between 500-800 AD. We do know that the Cimmerians and Scythians lived in Europe, even when their chief was dead. Then comes the Hun and Avar Turks, they mixed with the European people. If we look in those symbols of the Pict stones, we can clearly see the Scythian Style, and there is no doubt of that the Scythians are Turkish people. That's why we see common carvings between the Turks and Europeans, just because of that. What the west scholars don't know/don't wanna know is, that these stones, and the people, have connecting with the Scythian Turks and Hun Turks. Scyth and Scoth comes from the same origin.


Albania, Scotlands earlier name, comes from Alban Turks, who lived in the Caucasian, Strabon says, it is geographical name of the lands. Brutus had 3 sons, Locrinus-England, Albion-Scotland, Kamber-Wales; Brutus had Etruscan ancestor, Etruscan's comes from Troy. In england there is a river called Tamar, Tamar is Turkish, İron, or like Tomyris a Saka Turkish Queen, granddaughter of Alp Er Tonga/Afrasiyab, which we see in Egypt Tamarisk, or in Ukraine, Tomi city. Or, Kent - Kingdom, founded in Britain by the Jutes - Kent is in Turkish kent, meaning, like the cities, Tashkent, Chymkent. So, when it comes to the Turkish history/culture, they ignore, nothing is what it seems....


Scandinavians called Futhark, which was recruited from Scythian Turkish alphabet, some of these Futhark stones are to be read in Turkish. Odin and his people are Turkish of origin.


The same thing is between the Romans and Etruscan, Etruscans are Turkish people, Etruscan can be read in old-Turkish.


Dacians, a branch of Scythian/Saka Turks in Europe used Wolf standard, Wolf is to be seen in Troy-Dolon, Scythian standard, Gokturks Asena+standard, one of the chief of Etruscan is called r'Asena, Lukkia (Lycia) Leto a Shewolf, Shaman, Native Americans in wolf skins+warriors; all of them is Turkish culture, (Mongolians have that to, but they was never in BC times in these regions.) Shewolf is Turkish of origin. Why did I bring this, some of these Turkish Culture is only forwarded by the people who have Turkish origin, not all the Europeans used these culture.


We see in Egypt Scythian Turks, with wars the chief, the leader is dead, some of his people stayed, some went to other places. So....mixed. Only the Kipchak Turks have 22 different names in history, who knows that? Who knows that the Mamluks are Kipchak Turks? Or Safavids Turks? They call Safavids İranian, bullshit...İranian are called since 1925, before that it was always Turkish Dynasties, who ruled İranian lands.


Huns, Kipchaks, Pechenegs, Cumans, Avars, Alans, mixed with Europeans people and assimilated between them and the church.


Suvar/Subar/Sabir Turks, name father of Siberia, ancestors of Cimmerians, Bulgarians and Chuvashians. Cimmerians ancestors of Huns, Scythians-Parthians-Saka, all of them are the ancestor of today's Turks, all over the world.


Steppes of Russia full of Scythian, Kipchak, Cuman and Pecheneg Turks.
In Ukraine Scythians, assimilated between the Slavs.
And that brings us to Turks in BC times in Anatolia
Troy was a Turkish city, the war was between the Turks and Hellens
Today the world knows as Greek mythology, but this mythology was born in Mesopotamia and Anatolia, and of course the Turks introduced to the rest of the world. Beowulf, İliad and Dede Korkud comes from one origin.
Of course there are more examples....


And I condemn western scholars who ignore it. Nobody and non of the other nations, can write the history without the Turks. And when I say Turks, I mean all the Turks around the world.
I'm not racist, I'm not a fanatic, but I can not afford your ignore to us. When you call Greek history/Culture, Roman history culture is okay, but when it comes to Turkish ...!


Do not call with other names, as Persian, Greek or something else!...
Do not call as Nomad Culture, Nomads who built a huge culture and states!....
Do not call as İslamic Art, İslamic art contains also other nations who is muslim...
It is Turkish history, Turkish Art, Turkish Culture.
It's time to tell the Truth to the World.
Regards,
SB.
(I hope my English was enough to explain myself) 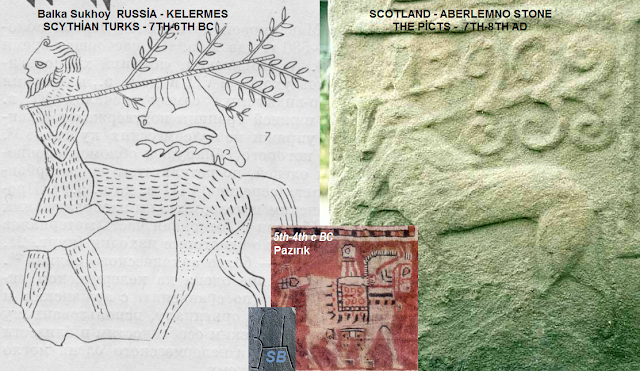 Rodney's Stone: Pictish Period
500-800 AD
Two Dragon-Wolf, like in the Turkish culture.
It is not a Elephant (so did they explain it),
but a Horse with Horn-Mask
and of course the symbol, we see also in Scythian/Saka art,
which dated back in BC times. 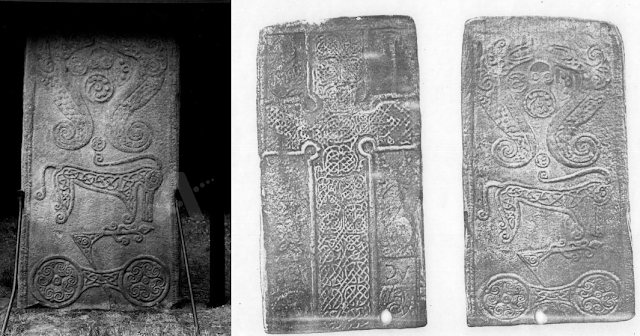 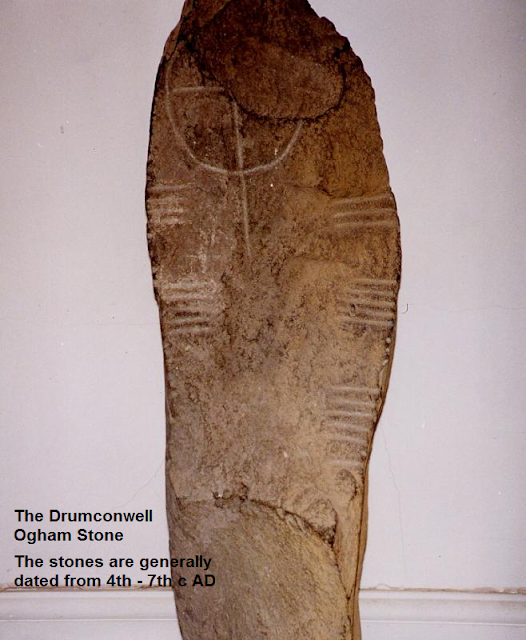 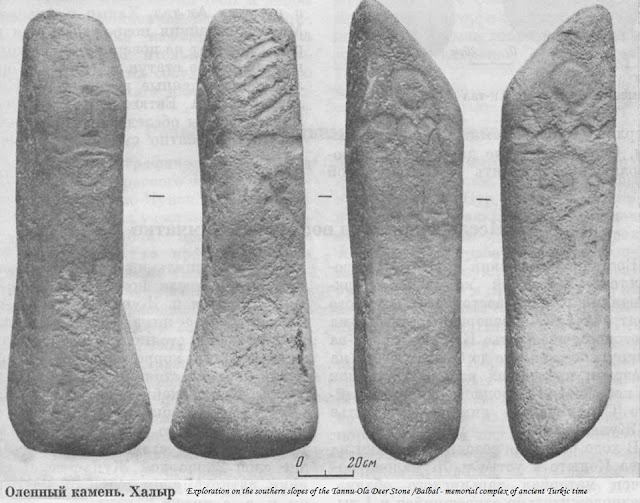 "Vertically mounted stone steles in the churchyard, solitary stelae with tamgas and deer stones were found in 10 points. Most of them are reused in the construction of the memorial complex of ancient Turkic time. Two deer stones knocked Ancient masks."
YA Plotnikov
Exploration on the southern slopes of the Tannu-Ola.1981
google translate from Russian lang. 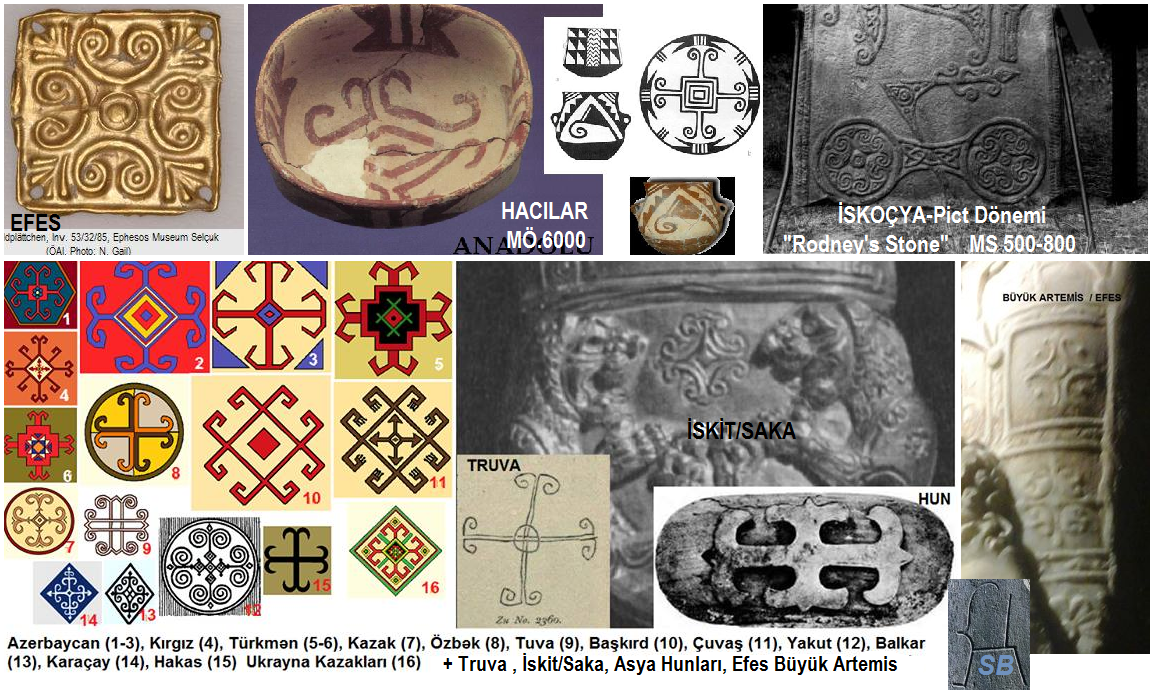 Irish Pedigrees; or, The origin and stem of the Irish nation
John O'Hart. J. Duffy and Company, 1892 - Ireland.

To see all of this, you have to look into the
Turkish history and Culture as well.
SB.