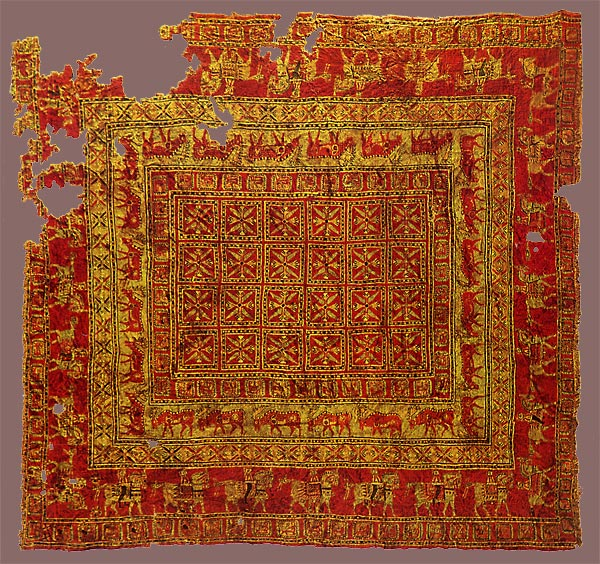 
...Draught animals among the nomadic tribes, in particular among the Scyths were predominantly oxen. Nevertheless, as we shall see below, both in the Altai and in central Asia, horses were not only ridden but also harnessed for traction. The large number of horses buried in a single barrow is noticeable; in an ordinary barrow one to three horses and in a rich barrow (of a tribal or clan chief or elder) seven to fourteen horses, and in one case even sixteen.

Marks have been recognized on the ears that identified the different ownership of the horses. On this evidence I came to the conclusion twenty years ago in the preliminary report on the excavation of barrow I that the horses had not belonged to the buried person. I cited as an analogy the account of Herodotus in which the Scyths bore a king's body in a cart from one subject people to another, and the corpses of humbler Scyths among their friends, who arranged a lavish feast for the mourners where all regaled the corpse.

I suggested part of the regaling could have been a gift of horses. Such a suggestion was wrong and ill-founded. In the text of Herodotus, it is clearly meant that the lavish feast was prepared for the mourners, and the corpse shared part of the regalement, that is the food; those believing in life after apparent death thought the departed would need to eat.

Food was placed in the tomb with the corpse to sustain him during his journey to the next world, and in addition all the pesonal possessions that he would require there. There are no grounds for supposing that any kind of extraneous gift was buried with the corpse. In the tombs of noble persons at PAZYRYK (PAZIRIK) all the horses were geldings ; not a single stallion or mare was found.

According to Strabo the Scyths rode exclusively on geldings. This can be readily understood if we bear in mind that we are dealing with horses ridden by pastoral folk. Among the KAZAKHS only the poor used stallions or mares for riding; the well-to-do rode geldings exclusively.

The same can be said of the Altaians, the better-off of whom never rode mares and stallions. The number of riding-horses that a reasonably well-off owner of horse-herds (let alone the chiefs) among pastoral people might expect to own at any one time would be several. For example, rich KAZAKHS usually had not more than three riding-horses at the house, but they would be changed several times in the year, and frequently in the winter. The same thing happened among the modern Altaians.

The pastoralist who set a high value on his riding-horses was extremely relucant to let a stranger ride one, and normally after the death of the owner his personal horses were never ridden agian. If we study the age of the horses buried in the PAZYRYK barrows we notice that in each interment there were one or two young animals three and a half, or even two and two and a half years old, several of middle age, and some old, fifteen to twenty years or more.

Hence it is clear that in each burial, besides the regular horses, we have in addition horse which were being trained for riding, and veterans; none of them would have been ridden agian once their owner had passed into the next world. The relatively large number of horses in the burials need not be a matter for surprise if we remember that a man and a woman of noble birth were being buried together. Let us recall that in barrow 5, although a man and woman were interred together, there was a total of only five riding-and four draught-horses.

Let us now turn to the ear-marks. Without a doubt different marks on the ears mean that the horses had been in different herds and in their time had belonged to different owners, but the buried horses would be choise riding-animals, which could have been bought, swapped or received as a gift in the chief's lifetime. All the horses whose bodies were well preserved (baroows 1,2,5 partly 3) had their manes and the upper part of their TAILS CLIPPED.

The custom of clipping the manes on riding-horses was very widespread at this period. It was practised in Hinter Asia and among the Black Sea Scyths. In the famous frieze on the silver vase from Chertomlyk, showing scenes of catching horses, those with untrimmed manes are from the herd (tabun) , for trimming of the mane was obligatory for riding-horses. The ridden horse illustrated on the felt carpet from barrow 5 has its mane trimmed. Judging by surviving representations it seems that the ridden horse in Hinter Asia, in particular in Assyria and in Achaemenid Persia, had its mane trimmed, but this was not done on draught-horses.

The motive for trimming the manes on ridden horses was that the wind blowing in the mane impeded the rider when shooting his bow. The TAILS of the horses of Scyths were docked, but in those from PAZYRYK  THE HAIRS HAD BEEN CUT at 25 cm.from their root. The TAILS were normally plaited from three tresses , less often twisted in a spiral and only one was plaited from five tresses. Several HORSE TAILS from barrow 1 were TIED ın a KNOT.

In the middle of the plaited tail there was usually a leather fillet faced with gold. It is worth noting that on the carpet already mentioned the TAIL OF THE HORSE is clearly represented as docked and then plainted, just as the tails were found on the majority of horse bodies at PAZYRYK....

1- ) KNOT IN THE TAIL "READY TO BE KILLED; FIGHT FOR YOUR COUNTRY, FAMILY AND HONOR " = TURKIC CULTURE !
2-) CUTTING THE TAIL = THE HORSE BELONG TO THE DEAD ONE, AND THAT's WHY THAT THE HORSE IS BEEN CALLED DEAD !
3-) BURIALS WITH HORSES IS ONLY TO BE SEEN BY THE TURKIC CULTURE !
4-) PAZYRYK (PAZIRIK) IS A TURKIC BARROW-KURGAN/TUMULI !
5-) KURGAN CULTURE IS TURKIC !
6-) THE SCYTHIANS ARE THE TURKS !


AND THAT'S THE NAKED TRUTH !


*PAZIRIK KURGANLARI - DEĞERLENDİRMEKURGANLAR
*PAZIRIK KURGANLARI RESİMLERİ
*ESKİ TÜRK KÜLTÜRÜNDE AT ve ATLAR
* PAZYRYK CARPET AND GORDİON KNOT - TURKiSH CULTURE
* Atlarda Kuyruk Bağlama
*ESKİ BİR TÜRK İÇECEĞİ: KIMIZ (KOUMISS)
"It is not surprising to come across a rich source of knowledge, starting out with the fact that kimiz has always involved folkloric and traditional motives throughout the history. This article will present the historical background of kimiz, the most ancient Turkish beverage that is made of mare's milk and its place in sociocultural life of Turks. As this subject is related to ancient Turkish traditions, the references are mostly of Turkish origin."  Yrd. Doç. Dr. Çağatay ÜSTÜN