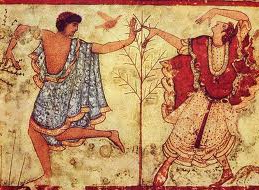 (*) To the many theories which have been advanced in regard to the Etrsucans may we be allowed to put forward one more? In our view the Etruscans appear to be an original Turanian race which formed the underlying stratum of population over the whole world, and which cropped up, like the Basques in spain, in that part of Italy and Etruria. "The great feature in the history of the Turanian races" as Mr. Fergusson writes, "is that they were the first to people the whole world beyond the limits of the original cradle of mankind.

Like the primitive unstratified rocks of geologists, they form the sub-structure of the whole world, frequently rising into the highest and most prominent peaks , sometimes overflowing whole districts and occupying a vast portion of the worlds surface , everywhere underlying all the others and affording their disintegrated materials to form the more recent strata that now overlie and frequently obliterate them.

In appearance at least whether nearly obliterated, as they are in most parts of Europe, or whether they still retain their nationality, as in the eastern parts of Asia they always appear as the earliest of races, and everywhere present peculiarities of feeling and civilasation easily recognised and which distinguish them from all the other races of mankind" -

The language of the Etruscans also seems to be Turanian an early stage of language which forms the substructure of a higher stage in many countries, a stage which language must necessarily pass through before reaching the higher inflectional or Aryan stage, for as Professor Müller observes, we cannot resist the conclusion that what is now inflectional was formerly agglutinative. "Further" as Sir Gardner Wilkinson writes, "it is the earliest mould into which human discourse naturally and as it were, spontaneously throws itself."

Hence the apparent connection of the Etruscan with other Turanian languages such as the Scythic, the Finnic, etc.

Like all Turanians the Etruscan were a tomb-building race. At a later period by colonisation, first the Tyrrhenian from Lydia, and secondly the Corinthian, when Demaratus settled at Tarquinii they received a Greek element of civilisation, but the people still remained essentially Turanian in their feelings and habits.

Mr.Taylor has pointed out some coincidences and similarities in thier language and religious beliefs to those of the Ugric and Tataric races. These similarities are not, however, to be attributed to any affinity of race of direct connection , but to these peoples being in the same stage of development with regard to civilisation and especially in regard to language.

The phase of civilisation being the same similar beliefs customs, etc. will necessarily be evolved. The phase of language being agglutinative many similarities will appear among Turanian of agglutinative languages, as the necessary result of their being in the same phase, and not from any connection of race. The characteristics of Etruscan beliefs and creed, of Etruscan language, will bear a great resemblance to those of other races in a similar low stage of development. This may be proved by extending the analogies.

Thus we find in the imperfect civilisation of some of the American races which may be considered as analogous to the Turanians of the eastern world, many analogies in beliefs, customs and language to the Turanian stage.

Hence, we meet in america temple-tombs (the pyramids of Mexico were undoubted temple-tomb) an animistic belief tent life, language in agglutinative phase, etc. Many other features, counterparts of which will be found occurring in the Turanian stage of the eastern world, will be met with in Mexico and Peru, all the necessary growth of that phase of civilisation.

This view appears to us based on firmer ground than that of comparative philology or comparative mythology (theories now in vogue), for it is based on the identity of the human mind, and the similarity of its stages of development among all races.

The characteristcs of each stage in the scale of development must consequently bear a great resemblance to each other among all races. Thus the lower or Turanian stage will be similar all over the world, while the higher or Aryan stage will also present similar features wherever a higher phase of civilisation occurs and thus we are led to the natural inference that the Tartars, Mongols, Etruscan, Basques, Mexicans, being in a similar lower stage of development (Turanian as it is generally called) will present similar characteristic features, in beliefs, customs an language. 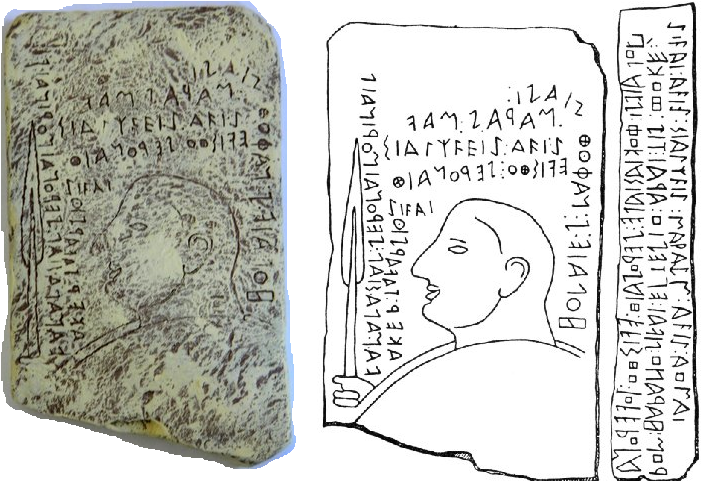 ...This inscription, found on Lemnos in 1884, has always been the most important testimony for the oriental origin of the Etruscans. It was soon recognized that the language of the inscription was closely related to Etruscan....

...both peoples are remains of a general non-Indo-European substratum....

...The last theory (of the three mentioned by Briquel), defended e.g. by Pallottino, is quite improbable. First, there is no evidence that there was a language covering Italy and (the west of) Asia Minor. On the contrary, whereas there is ample evidence for one language (or language group) in Greece and Asia Minor (the Greek substratum language), there is no evidence that this language also existed in Italy (apart perhaps from a few words, that might easily have spread secondarily). Then, it is almost impossible that the names of these peoples, remained the same over so long a period. It is even improbable that peoples with the same language but living so far apart would keep the same name. Further, old languages may hold out in places that are of difficult access, but this cannot be said of Tuscany: this is not a relic area. On the contrary, it is a most fertile and desirable country. If the Etruscans were there already when the Indo-Europeans entered Italy, they would have taken Tuscany just like the whole rest of Italy...


...It would point to a close It may be noted that the Pelasgian story, the variant that the Etruscans originated from Pelasgians in Greece, agrees with the Lydian tradition in that it assumes that the Etruscans came from overseas, from the east. Also it uses the same name for Etruscans, Pelasgoi, as is used for people in the north-west of Anatolia. Homer, B 840-3, mentions Pelasgoi as allies of Troy; they are mostly thought to have lived in the Troas The triumphus complex.

The Kabeiroi. One might also recall the Latin word camillus, which
means a young boy of noble birth who assists with ritual actions. The word is stated to be of Etruscan origin; see Ernout-Meillet and Walde Hoffmann s.v. The first handbook states that the initial stress confirms this. Varro derived the word from Kadmilos/Kasmilos who is one of the Kab(e)iroi. Cf. Dion. Hal. 2, 22, 2; ‘And all the functions which among the Tyrrhenians ... were performed by those they called kadmiloi in the rites of the Kouretes and the Great Gods, were performed in the same manner by those attendants called by the Romans camilli.’ Again, Dionysius (i, 23, 5) relates: ‘For the Pelasgians [ =Etruscans] in a time of general scarcity in the land had vowed to Zeus, Apollo and the Kabeiroi tithes of all their future increase’.

This shows not only that they honoured the Kabeiroi, a groupof gods originating from northwestern Asia Minor, but beside Zeus, who is no doubt the god of lightning, Tarchon, and Apollo, who is also probably originating from Asia Minor. (Note that he is the defender of Troy, and cf. Apaliunas, mentioned in the treaty of Alaksandus of Wilusas with the Hittite king (e.g. Latacz 200i, i38).32 The subject is of great importance. We saw that the Etruscans kept the connection with the Kabeiroi. But Herodotus, 2, 52, says very clearly that the cult of Samothrake was a Pelasgian cult (and he makes it very clear that he means with Pelasgians the Tyrsenoi). That is, they did not, at a later stage, take it over, but the cult arose among them. Which means that they lived there (for a very long time). Again, this fact in itself shows that the Tyrsenoi/Etruscans came from there...


Conclusion
The conclusion is that the evidence that the Etruscans came from Asia Minor is overwhelming: their name (Turse·noi - Etrusci); the fact that TyrseEnoi are still living there in classical times (the eastern TyrsEnoi); their language (Lemnos; PlakieE and SkylakeE ; the possible connections with Lydian); the names of their leaders (Tarchon; Nanas); their religious beliefs (Tarchon; the triumphus-complex; the double axe; the camillus -complex and the fact that the cult of the Kabeiroi was of Tyrrhenian origin); the epigraphical evidence (TyrseEnoi east of Lydia);...


...The Pelasgians, and their relation to the TyrseEnoi, are still much of a puzzle. It is clear that the Pelasgoi were a non-Indo-European people which the Greeks met, in Thessaly, when they entered Greece. It seems that their name was later used simply for the old inhabitants of Greece, or at least large sections of them. I consider the possibility that the Pelasgians in Asia Minor were also just a non-Greek people, whether they were related to the continental Pelasgians or not. In the beginning the TyrseEnoi were simply called Pelasgoi...

...In this way the origin of the idea of the Etruscans being
Pelasgians becomes clear. Then it becomes understandable that one can also call the TyrseEnoi Pelasgians, simply because they were a part of them. The more precise name TyrseEnoi became only known and used later, when it became clear that they were a separate entity, especially after the Greeks got acquainted with the Etruscans. (One might compare Morocco, of which the inhabitants are Arabs; but one learns only later that a large part of the population is Berber, with a different language and different traditions.)

Thus the ‘confusion’ about these names is understandable. - The stories about Pelasgians sailing from Greece to Asia Minor may all be fantasy...


...A. Palmucci (in Anatolisch und Indogermanisch, edd. Carruba -Meid, 200i, 3ii - 353, esp. 353) argues that there is evidence that the story of Aeneas in Italy was preceded by a version where the journey from Troy went to Etruria. If this is correct, it is of great importance: the Romans will not have made such a story, so it will be an Etruscan story, telling that they came from Troy...


"Unless a great substratum of the inhabitants of Greece belonged to the Turanian family, their religion, like their language, ought to have presented a much closer affinity to the earlier sriptures of the Aryan race than we find to be the case. The curious anthropic mythology of the Grecian Pantheon seems only explicable on the assumption of a petential Turanian element on the population, [...]."


James Fergusson, Tree and serpent worship, or, Illustrations of mythology and art in India in the first and fourth centuries after Christ: from the sculptures of the Buddhist topes at Sanchi and Amravati, Asian Educational Services, 2004, Reprint London 1873 edn., p.13 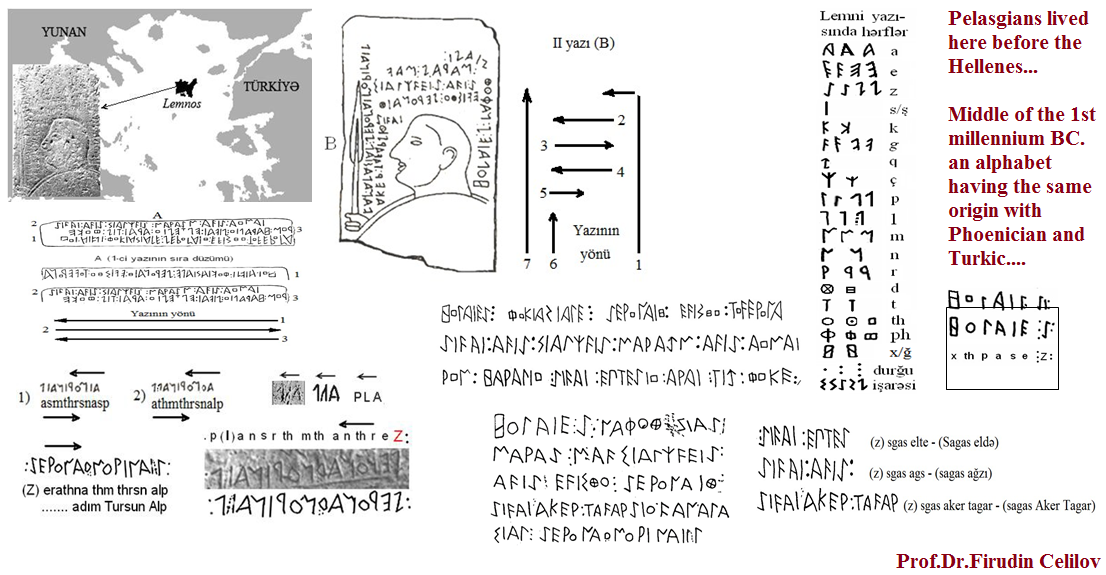 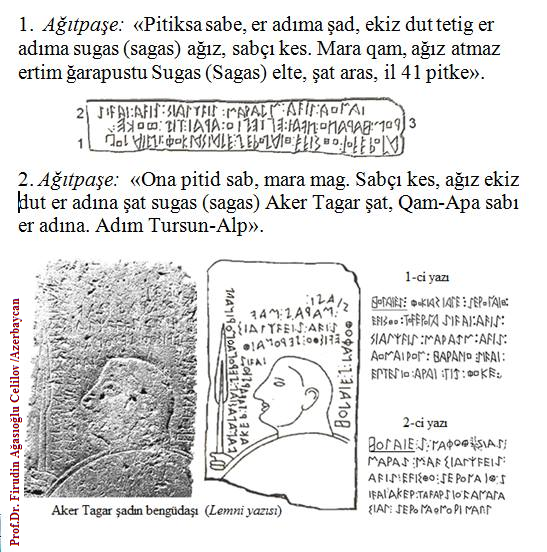 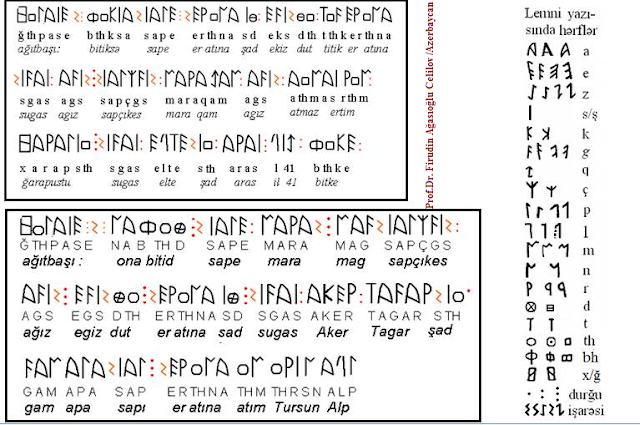 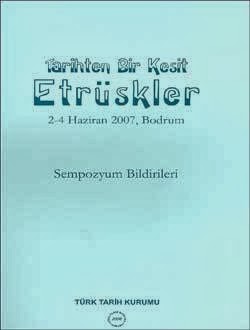 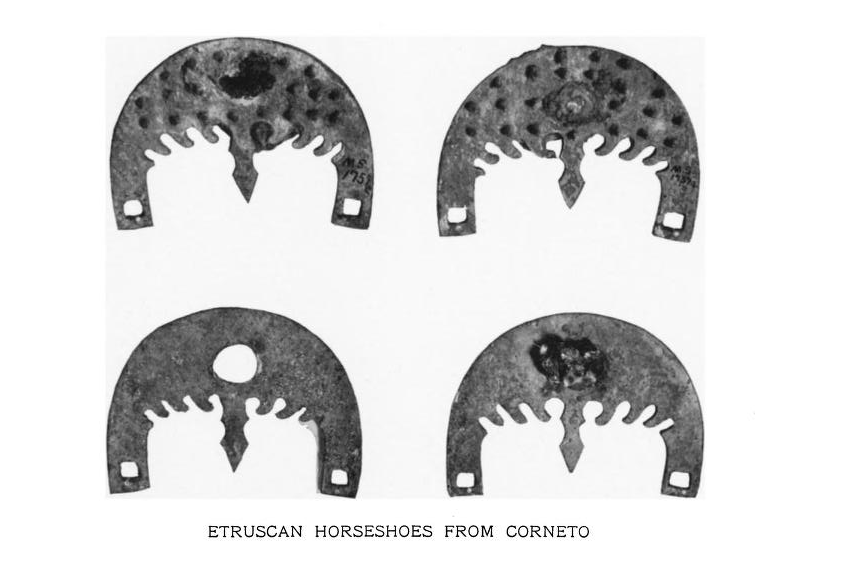 ETRUSCAN HORSESHOES
They were found in an Etruscan tomb
dating probably from the 4th century B.C.
LİNK

Horse was domesticated for the first time by Turkish tribes, everything that has to do with horse equipments are made by Turks.
"The first Indo-Germans owe the ancient Turks for the domesticaed horse..."
Even the stirrup was adopted by the East Roman Empire army from Avar Turks in the sixth century AD...