KIBRIS TARİHİ - THE HISTORY OF CYPRUS - 6 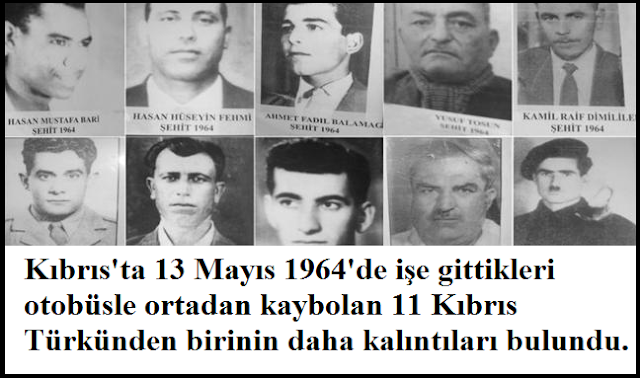 THE VOICE OF BLOOD - ANTONIS ANGASTINIYOTIS

"I'm constantly asked why I'm opening old wounds and not letting the past to be forgotten. The answer is very simple. The wounds are not old, otherwise there wouldn't be mothers dressed in black, weapons, soldiers and borders. Although I've lived on this island for 40-years, I only began to explore the other half of the realities last year and what I discovered bore a deep wound in my soul.


When I got over the propaganda wall and realized that people were knowingly hiding the other half of the reality or they were distorting the reality, the past now becomes a frightening 'present'. If you want to find more than one reality, you need to constantly dig the soil until your hands are bloody. If you talk, they say you are a traitor, threaten your life, and most of your friends turn their backs on you. You can be totally alone.


Loneliness no longer frightens me. For a long time now, at nights a group of children from Murataga come to my bed and together we read short stories. They smile happily at me because I have told their stories to the world, whereas I am engulfed in tears because of not being able to count the number of bullet wounds in their small bodies before they leave. The wounds cannot be old because when I wake up I find blood stains on my white sheets. The wounds cannot be old because up until now no one has apologized.


The animosity between the Greek Cypriots and Turkish Cypriots is not new. It didn't start in 1974, or in 1963, nor when the Byzantium Empire collapsed. It started much earlier; it started during the Cain and Abel period. The start of the animosity is in the hearts of the people and as long as it remains there, we will seek the opportunity to bury Cain's dead body or take revenge from Abel.


The purpose of writing this book is social, not political. However, it is not possible to avoid the political aspects of the events. The main aim is to address every Cypriot, especially the Greek Cypriots. Because I also learned to look at the political situation of Cyprus from this point of view.


Both the domestic tension created by the 24 April 2004 referendum with the aim of reunifying the island (Annan Plan) and my daily contacts with the world, takes me to only one conclusion. Extreme nationalism that is deeply rooted in peoples' hearts is the biggest obstacle for people to reconcile. For the situation to change permission must be given to explain the realities regarding the dark corners of history. It's not possible for people to clean their souls without regretting what they've done and it's not possible for them to regret what they've done without acknowledging their faults.


The majority of the Greek Cypriot youth know very little about the events that led to the island's division. The tragic events of 1974 have been used as a huge curtain to cover up the real events that led to the division of the two people. In our schools it has always surprised me that while talking about the heroism of EOKA, they skip 15-years and continue with 1974. Either nothing happened between 1960 and 1974, or no one wants to discuss this. While researching the events during this period (1960-74), I realized that the second choice was right.


When I started to write this research, my cousin from Greece and her two daughters came to visit me and we started to discuss the events of 1963-74. The daughters knew nothing and what their mother knew was very confusing. At one stage of the discussion I mentioned some of the Greek Cypriot leadership's mistakes and all of a sudden this brought out the nationalist monster in my cousin who said: "Makarios' biggest mistake was not to have killed all the Turkish Cypriots in order for us to be comfortable".


This sweet and pretty woman, who couldn't even kill an ant, had suddenly turned into a killer who could carry out mass murders. She wanted a whole race to be wiped out. This is what I said to her: "In other words, do you mean taking out all the children from school, all mothers with their babies and all the men from their work places and taking them to a big hole in Messaria and murder them…Do you want to be one of the murders or the one of the persons using the bulldozer to cover the mass graves…"


There was silence. The example I gave helped her to understand the meaning of what she said. Then I started to speak again. "We tried this before in Ayvasil, Murataga, Atlilar, Taskent, but the only thing we succeeded in was soughing the fruits of our efforts".


Since our childhood we were taught that the Turks were barbaric dogs. My aunt used to say to me that they smelled because they weren't baptised. Whereas according to the Bible, we are modern Christians who love their environment. Then, why did our religious leader Makarios in 1964 say that 'If Turkey comes to intervene to protect the Turkish Cypriots, she will not find a single Turkish Cypriot to save…' The answer is clear. In Cyprus there is a saying, 'another priest's sermon'. In certain situations this enables us to hate. This book will deal with some of these special situations.


While there are those who claim that 'the Cyprus problem started in 1974 and the problem is an issue of invasion and can be settled if the invading forces withdrew from the island', the Turkish Cypriots know well what they would be faced with if Turkish troops left the island. Because the bitter pain of the 11-years before the arrival of the Turkish troops has not been erased from their memories. The EU should to Papadopoulos, 'the Turkish troops brought peace to Cyprus, they are the protectors of peace because as you arm yourself to take over the whole of Cyprus under the usurped title of the Cyprus Government, the Turkish Cypriots have the right to be protected and to protect their state against you'.


Those who peace, unification and reconciliation should see the realities and act realistically. The realities in Cyprus have been ignored for 40-years. These realities are the existence of two equal peoples in Cyprus with the right to self-determination and that neither one of these sides can dominate or represent the other and does not have the right to be the sole government of the whole of Cyprus…"


Antonis Angastiniyotis / THE VOICE OF BLOOD

This video is censored in Greek Cyprus / Greece

video is in Turkish/Greek:

THE HISTORY CANNOT BE WRITING ON ONE WAY
IF YOU CAN NOT HANDLE THE TRUTH,
DON'T SPEAK !