KIBRIS TARİHİ - THE HISTORY OF CYPRUS - 5 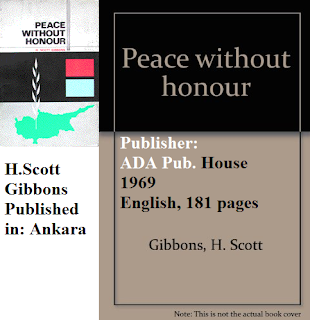 
The brutality in Mathiati village of Nicosia where 208 Turks lived was expressed as below by Gibbons:

"(...) three Turks were seriously injured at the first minutes. When Turks burst out of their white, small houses into the streets, the screaming and cursing crowd began to push and kick them along the way. The terrified Turks who fell down on the floor as a result of riffle butt strikes were dragged across the streets while the crowd stormed into houses, pulled burning logs out of the furnaces and set curtains and beds on fire. The old wooden roof beams were surrounded by smoke and then flames. Barefoot women mostly in nightgowns were also pushed here and there on the burning streets, either holding tight their terrified little babies or with their toddlers catching the ends of their nightgowns or trousers and following them together with others dragging their injured away.

Greek youngsters host at the houses hysterically and yelled madly with hoarse voices. Before the flames completely covered the houses, they materialized into the houses, broken things and grabbing valuable goods. The wild sounds coming from the back of the houses attracted he attention of the assailants to the animals of Turks. They stomped into the barns and raked cows, sheep and goats with machine guns. They threw the chickens into the air and shot them while they desperately cackled and struggled. Their bodies broke into pieces and feathers covered everywhere.

The crowd screamed and yelled in a bloodthirsty manner. Turks were dragged through the frozen streets out of the village. They were left in pain around Kochatis, another Turkish village. The Kochatis villagers hurried out of their houses to help their neighbors while the crowd headed back to Mathiati to continue the plunder and all the madness".


"Weapon sounds were heard. They broke locked doors with rifle butts and dragged people onto the streets. A 70 year-old Turk awoke to the sound of its broken front door. He teetered out of his bedroom before he was asked if he had any children by many youngsters with arms. Dumbfounded, he pronounced "Yes". "Send them out" they ordered. Tow sons of his, 19 and 17, and her only daughter, 10 got dressed hurriedly and followed the armed men out.

They were lined up near the farm fence and shot dead with machine guns by those armed men. In another house, they found a 13 year-old boy, tied his hands at his back, knelt him down. They plundered the house, kicked and raped the boy and shot him at the head.

That night, 12 Turks were slaughtered in Ayios Vasilios. Others were gathered and pushed out of the village to take refuge in Turks in Skylloura. Barefooted, with their pajamas and nightgowns on, they teetered to proceed in the cold. The Greek cypriots fired at them in the dark.

The armed men headed for the Turkish houses. They plundered and destroyed the houses and when they got exhausted, they set the houses on fire. Nine more Turks that lived in the surrounding farmhouses were killed in the same region".


"Armed men broke the doors and stormed into Turkish houses, kicking, beating, punching and cursing at them. The retreat from Kumsal began. Once more, dazed and appalled families that resembled those facing debacle in Europe by Nazi attacks were on cold streets rifles burst and machine guns raffled.

They were slipping and falling down. They began to run away, seeking support from one another. The screams of a woman echoed on the street, who squealed "Is not there anyone to help, Gor God's sake?"

159 inhabitants of Kumsal Turks could not make it to run away that night. Four people in the bathroom were killed apart from the landlady and four other people. 150 people were taken hostage. No one ever saw some of the hostages again.


THE HISTORY CANNOT BE WRITING ON ONE WAY
IF YOU CAN NOT HANDLE THE TRUTH,
DON'T SPEAK !