Turks- Turkish and not Turkic!

Me personally (and some) do not use the word "Turkic", because of the meaning: "The Turkic peoples are a collection of ethnic groups that live in central, eastern, northern, and western Asia as well as parts of eastern Europe. They speak languages belonging to the Turkic language family".

This is a wrong expression, especially "collection of ethnic groups", because they are TURK of ETHNİC, and not some strange ethnic groups who came together.

The world is confused about the tribe names, they think that these tribe names represents a different ethnic. On the contrary, all these tribes are the TURKS.

Example: Huns and Oghuzes have 24 tribes and many subgroups, like Ağaçeri Turks (Tree people: in ancient times as Agathyrsi, a Scythian+Hun tribe); or Oghuz tribes like Kayı (Ottoman comes from); Kınık (where Seljuk Turks comes from).... but all of them are TURK of ETHNİC.

And many of these Turkish Tribes live in Turkey, and that's why it is called only "Turks". In Dutch they called as TURKSE VOLKEREN; the meaning is TURKISH PEOPLES, and that is one of the right expression.

They do call also as "Islamic", but religion is spread among differend nations. You have under "İslam Art" : Arabic Art, Persian Art, Malaysian Art, etc.... and you have of course Seljuk, Mamluk and Ottoman, but they are as İslamic represented by some scholars and in museum explanations. Somehow, determination of the political identity of the Turks is "Islamic", or with false ethnic identity, which is absolutely wrong ...

So the history, art and culture must be written as "TURKİSH CULTURE AND ART", then with their dynasty, tribal or clan name but not as Turkic ! So can the rest of the world understand in which ethnic are these art and culture belong to... We are A Huge Family, don't forget that... And I won't allow them to steal it from us with the so-called expression "Turkic"! It is TURK. 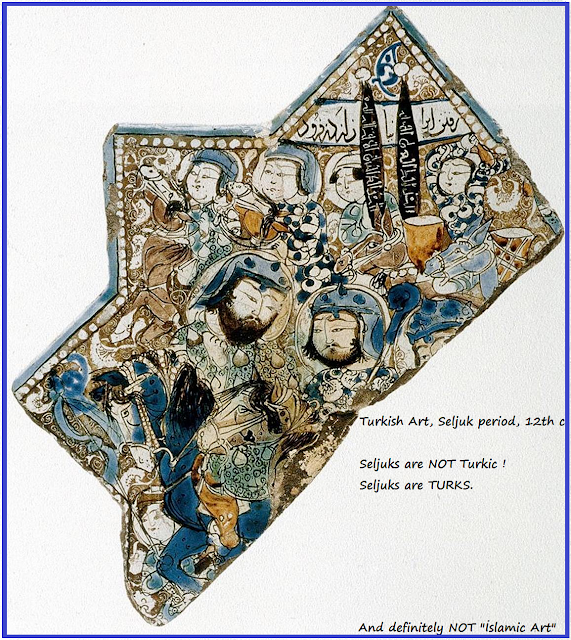 For example for the image:

Seljuks are NOT Turkic !

And definitely NOT "İslamic Art" 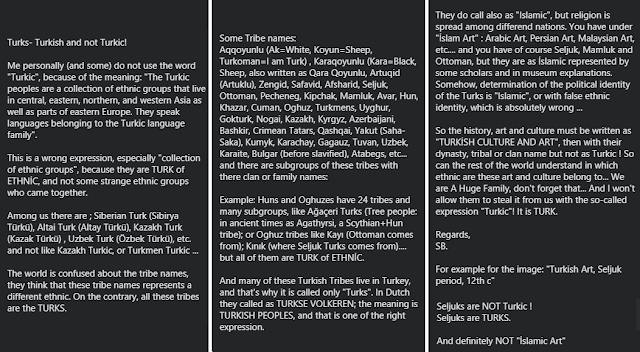