Many scholars in China and abroad studied the Hun's language. The common idea is that the language belongs to the altai branch. Zhangqian mastered the language when he was held in custody over the years by the Huns. From his recording of the vocabulary and sentences of the Hun in Chinese you can find out that the language is a kind of Turkic language. According to "The History of The Wei Dynasty", the language of the Chile, the ancestor of the Uygur and the Yugur, was, the "the same as the Hun, but with slight difference".

This can also prove that the Hun's language is a Turkic language. (read also Talat Tekin - Hunların Dili - SB)

Considering those that live in the Volga river region and speak the Turkic language, such as Bashkir, which is known as the descendant of the Hun and Chuvash and Tartar people, we can be more affirmable that the Hun's language is a Turkic language.

The Mari people is of Finno-Ugrian race, but were subject to a considerable old Turkic influence, 1000-1500 years ago. So Mari folk songs are very similar to the Turkic folk songs. This point is of important significance.

The obvious coincidence of the melodic progression of the rhythm style, of the words and meaningless words in songs is not accidental. When and who brought these factors from our country to the remote East European countries? In my opinion it is the result of the migration of the Hun.

According to documentation in Chinese history in 91 AD, there was a locust an draught calamity, the plants and trees were drying, of the population and cattle were killed by famine and disease Wuhuan (*) invaded by chance and the Hun were defeated and then devided into a north group and a south group. Later the south group pledged loyalty to the Han Dynasty and merged together with the Chinese and the other minorities. But the north Hun migrated to the west in 91 AD and arrived in the Hungarian Plain in 374 AD, and founded a Hun empire there. In the middle of the 5th century the Hun emperor Attila died and the empire collapsed. One part of the Hun settled down in Hungary, another part moved up the Volga River region.

About a hundred years later, the Avars came from the East to the Hungarian Plain by the middle reach of the Danube River and founded a Hun empire. This Hun empire lasted till the 8th century. The French historian De Guigenes pointed out that Avars is "Roran" according to the Chinese history book. According to documentation in Chinese history that "Roran" is a branch of the Hun, or a branch of the Mongol called "Donghu" of a branch from the Turkic nationality. But the Frenchman Chavannes insisted that the Avars who occupied Hungary is Turkic or Ouigour. In Slavic chroncile the Avars are called "ogur".

The Magyar came from the Volga River region. They began their migration in the middle of the 5th century. In the long course of the migration over four centuries. In the long course of the migration over four centuries, the Magyar mostly in the area controlled by the Turkic. The long mixture not only mixed up the blood heritage but also deeply influenced their culture. That the vocabulary about livestock breeding, such as "bull", "calf", "pig", "sheep", "cheese" and so on all came from Turkic language is afirm evidence. When the Magyar was defeated by the people that spoke the Turkic language and fled to the Carpathian Basin in 896 AD, the songs they brought must have had a lot of ingredients of the Turkic folk songs and the Huns's folk songs, the similarity and sameness between the Hungarian folk songs and the folk songs of the Turkic minorities that live in the Volga River region and the obvious differences of those from the Finnic folk songs just proves this point.

Each modern nationality has its ancient origin, but you cannot simply say that a modern natin is equivalent to its ancient ancestor. For the formation of each modern nation in its long river of history has its micture and combination with other nations. The ancient Magyar is one of the important sources of modern Hungarian nation. Modern Hungarian is the descendent of Magyar that came to Hungary in 896 AD and blended with the mixture of the Hun, the Avars and some other nations that lived there. Though there are no longer any Huns in Hungary now, from the comparative research of the Chinese folk songs and the Hungarian folk songs you can find out that the influence of the Hun's music is very strong in Hungarian folk songs, that the Hun's music is one of the sources of the Hungarian music.

Bartok did his field work in Turkey in 1936, and he edited the 87 folk songs he collected into a book. Twenty of them are the same as Hungarian folk songs, and 40% of all the 87 folk songs have some relations with the Hungarian folk songs. Bartok pointed out in his conclusion that this discovery of his has international significance, and it shows that the Hungarian have the same origin, which is Central Asia and the surrounding area. The modern Turkish people is the descendat of the Osman Turkic that migrated from Central Asia to Minor Asia and mixed up with the Greek, Arabian and the Armenian. (read SB note) The similarity of the Turkish folk songs and the Hungarian folk songs also shows that the Hun's music is one of the sources of the Hungarian folk music. For the Turkish that speak a kind of Turkic language has blood relations with the Uygur and the Yugur minorities in China. The Turkish and the Uygur can still talk each other without interpretation. Turkish folk songs are also similar to the folk songs of the Yugur, the Kazak, the Khalkhas (Khakassia- and all the other tribes are Turkish - SB) and some other minorities.


SB NOTE  on "The modern Turkish people is the descendat of the Osman Turkic that migrated from Central Asia to Minor Asia and mixed up with the Greek, Arabian and the Armenian." :  Osman, or actually Atman (which became Ottoman), is the name of the dynasty, the nation is Turk. Before Atman period comes the Seljuk Turks and Anatolian Principalities, and all of them are Oghuz (Oğuz) Turks. Oghuz Turks ancestors are Gokturks-Huns-Scythians (Sacae)... The mixing of nations are mutual. Greeks, Arabians and Armenians , some of them are Turkish of origin. Because of the Sacae (Scythian), Parthian, Troyan and Pelasgian Turks. So, nothing is homogeneous, but the Turks were already here before the BC times.... and Turkic is wrong expression, they are Turks. 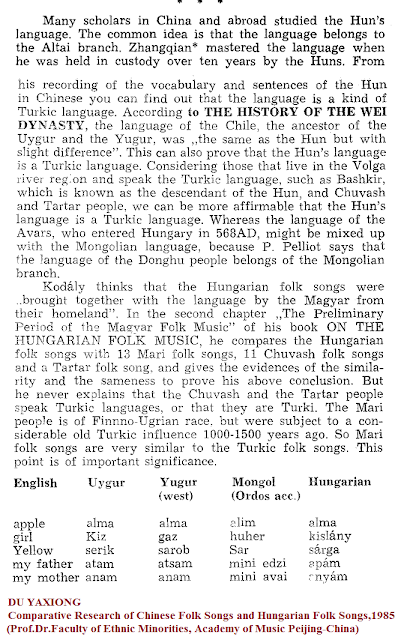 "Until the 13th century, we can not distinguish between Mongolian and Turkish language."
Prof.Dr.Ahmet Taşağıl
AVAR TURKS