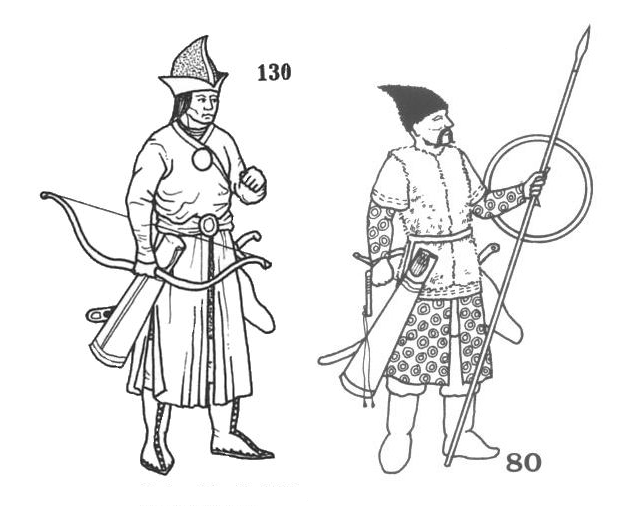 The Cuman or Kipchak Turks were probably descended from a branch of the Ghuzz (Oghuz - Oğuz). They appeared on the borders of Kievan Russia in 1054, crossed the Carpathians in 1070 and were established along the Danube by 1090, by which time there were effectively 5 independent groups; these were based respectively in Central Asia, the Urals, along the Donets-Don, along the lower course of the Dnieper, and on the Danube, the last group being the relevant to Hungarian and Byzantino-Bulgarian history.


In the early-13th century Robert de Clan, a participant in the Fourth Crusade, wrote the following succinct description of the Cumans:


'They are a savage people, who neither plough nor sew, and they have neither huts nor houses but instead they shelter in heavy tents made of felt, and they live on milk and cheese and meat… Each one has at least 10 or 12 horses, which are so well-trained that they follow anywhere they are led; and they mount first on one and then an another [and so on]. When they are on a raid, each horse has a bag hung on his nose in which his fodder is put, and he eats as he follows his master, but they do not stop moving by night or by day. And they ride so hard that they cover in one day and night fully 6 days' journey, or 7 or 8. And while they are on their way they will not seize or carry along anything until they are on their way back, but while returning they seize loot and prisoners and anything else they can get. Nor do they go armed, except that they wear a garment of sheepskin and carry bows and arrows.'


Byzantine and Russian sources add lances, sabres, lassoes, maces, javelins, shields and armour to this list of equipment, the Cumans being noted for their accuracy with javelins. Shields were either circular or almond shaped. Like all steppe peoples they wore no spurs, instead controlling their horses with a short whip.


Dress basically comprised a long topcoat , with side-vents, knee-length tunic, trousers, pointed cap, and boots or shoes with brocade, linen, fur and wool all in evidence. In general appearance the Cumans were handsome, blue eyed and blonde-haired , the Russians called Polovtsy and Germans Falven; meaning 'yellow' . Their hair was worn long but they shaved their chins, though long moustaches were often worn.


Although many settled in Bulgaria (especially in Dobrudja and Bessarabia) and, after the Mongol invasions, in Hungary, the Cumans remained tent-dwelling nomads for most of this period, and utterly pagan to boot; Joinville, for instance, records the burial alive of a horse and servant in the kurgan of a deceased chieftain even in the mid-13th century.

At various times during this period the Cumans (also called Kipchaks, or Polovtsy by the Russians) fought either as allies or mercenaries for the Byzantines, Georgians, Mongols and Romanian Franks as well as the Russians, Bulgarians and Hungarians, and as slave-soldiers in Ayyubid, Mamluk Turks and Khwarizmian armies. They may also, towards the end of the 11th century, have served with the Khazar Turks during the twilight years of the Khaganate.


They wore trousers, boots, long Arab-style tunic and kaftan. Brocade, fur, wool and linen predominated, but goatskins were also worn, recording the events of the Fourth Crusade, speaks of the Cumans wearing a sheepskin garment which may have been intended to serve as light armour. Other forms of armour including scale and lamellar were also worn depending on wealth and social status.


Robert de Clan implies that the Cumans were armed only with their bows, but Byzantine and Russian sources also record sabres, lances, lassoes, maces and javelins in use, the Cumans being noted for their accuracy with the latter. Most shields were small circular ones, but some Cumans carried a small version of the kite shield.


They also included some foot-soldiers on occasion. These probably rode camels on the march. 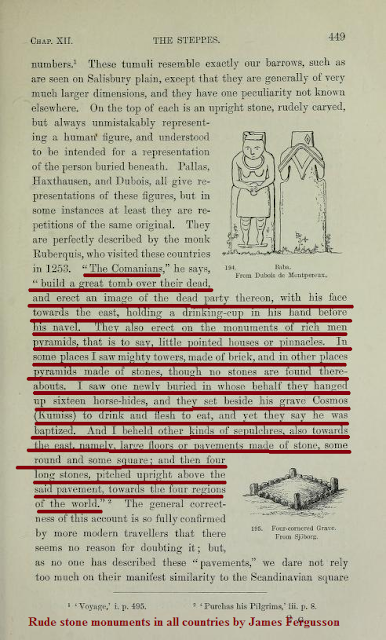 By Monk Ruberquis in 1253 : " The Comanians (Cumans) build a great tomb over their dead, and erect an image of the dead party theron, with his face towards the east, holding a drinking-cup in his hand before his navel. They also erect on the monuments of rich men pyramids, that is to say, little pointed houses or pinnacles. In some places I saw mighty towers, made of brick, and in other places pyramids made of stones, though no stones are found there-abouts. I saw one newly buried in whose behalf they hanged up sixteen horse-hides, and they set beside his grave Cosmos (Kumiss) to drink and flesh to eat, and yet they say he was baptized. And I beheld other kinds of sepulchres, also towards the east, namely, large floors or pavements made of stone, some round and some square; and then four long stones, pitched upright above the said pavement, towards the four regions of the world."
James Fergusson

All of them are to be seen among all Turkish tribes. After Christianity, "baptized", Turkish tribes like Huns, Avars, Kipchak-Cumans, Pechenegs are assimilated in Europe. So, how much are the Europeans "Europeans"?
SB 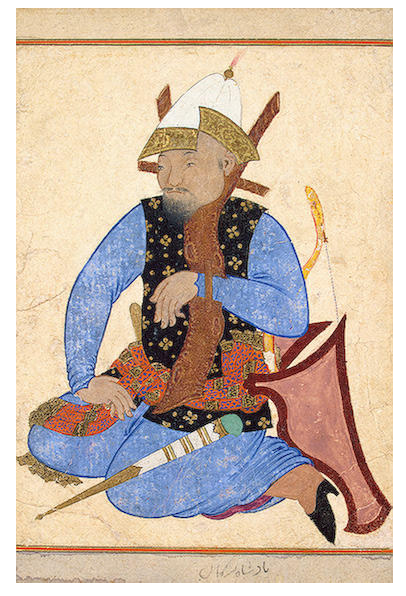 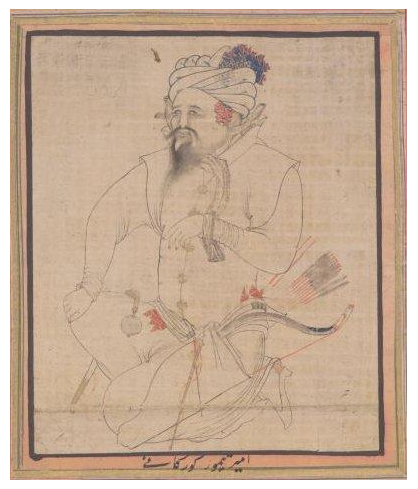 The Turkoman; kneeling, with his wrist fettered to his neck, and a quiver of arrows on his belt.
17th-18th centuries...link