The Turks in the Seventh Century

"At that time we must remember, there was hardly such a thing as a town in Anglo-Saxon England...." H.G.Wells

"It becomes fairly evident that in the fifth and sixth centuries A.D. not merely Persia, but the regions that are now Turkestan and Afghanistan were far more advanced in civilization than were the French and English of that time. The obscurity of the history of these regions has been lifted in the last two decades, and a very considerable literature written in languages of the Turkish group has been discovered. These extant manuscripts date from the seventh century onward." - page 628

"Yuan Chwang’s account of Samarkand is of a large and prosperous city, “a great commercial entrepôt, the country about it very fertile, abounding in trees and flowers and yielding many fine horses. Its inhabitants were skilful craftsmen, smart and energetic.” At that time we must remember there was hardly such a thing as a town in Anglo-Saxon England." - page 646


Buddhist named Yuan Chwang started out from Singan, Tai-tsung’s capital, upon a great journey to India. He was away sixteen years, he returned in 645, and he wrote an account of his travels which is treasured as a Chinese classic. One or two points about his experiences are to be noted here because they contribute to our general review of the state of the world in the seventh century A.D.

Yuan Chwang was as eager for marvels and as credulous as Herodotus, and without the latter writer’s fine sense of history; he could never pass a monument or ruin without learning some fabulous story about it; Chinese ideas of the dignity of literature perhaps prevented him from telling us much detail of how he travelled, who were his attendants, how he was lodged, or what he ate and how he paid his expenses—details precious to the historian; nevertheless, he gives us a series of illuminating flashes upon China, Central Asia, and India in the period now under consideration.

His journey was an enormous one. He went and came back by way of the Pamirs. He went by the northern route, crossing the desert of Gobi, passing along the southern slopes of the Thien Shan, skirting the great deep blue lake of Issik Kul, and so to Tashkend and Samarkand, and then more or less in the footsteps of Alexander the Great southward to the Khyber Pass and Peshawur. He returned by the southern route, crossing the Pamirs from Afghanistan to Kashgar, and so along the line of retreat the Yueh Chi had followed in the reverse direction seven centuries before, and by Yarkand, along the slopes of the Kuen Lun to rejoin his former route near the desert end of the Great Wall. Each route involved some hard mountaineering. His journeyings in India are untraceable; he was there fourteen years, and he went all over the peninsula from Nepal to Ceylon.

At that time there was an imperial edict forbidding foreign travel, so that Yuan Chwang started from Singan like an escaping criminal. There was a pursuit to prevent him carrying out his project. How he bought a lean red-coloured horse that knew the desert paths from a strange grey-beard, how he dodged a frontier guard-house with the help of a “foreign person” who made him a bridge of brushwood lower down the river, how he crossed the desert guided by the bones of men and cattle, how he saw a mirage, and how twice he narrowly escaped being shot by arrows when he was getting water near the watch-towers on the desert track, the reader will find in the Life. He lost his way in the desert of Gobi, and for four nights and five days he had no water; when he was in the mountains among the glaciers, twelve of his party were frozen to death. All this is in the Life; he tells little of it in his own account of his travels.

He shows us the Turks, this new development of the Hun tradition, in possession not only of what is now Turkestan, but all along the northern route. He mentions many cities and considerable cultivation. He is entertained by various rulers, allies of or more or less nominally tributaries to China, and among others by the Khan of the Turks, a magnificent person in green satin, with his long hair tied with silk.

“The gold embroidery of this grand tent shone with a dazzling splendour; the ministers of the presence in attendance sat on mats in long rows on either side all dressed in magnificent brocade robes, while the rest of the retinue on duty stood behind. You saw that although it was a case of a frontier ruler, yet there was an air of distinction and elegance. The Khan came out from his tent about thirty paces to meet Yuan Chwang, who, after a courteous greeting, entered the tent.... After a short interval envoys from China and Kao-chang were admitted and presented their despatches and credentials, which the Khan perused. He was much elated, and caused the envoys to be seated; then he ordered wine and music for himself and them and grape-syrup for the pilgrim. Hereupon all pledged each other, and the filling and draining of the winecups made a din and bustle, while the mingled music of various instruments rose loud: although the airs were the popular strains of foreigners, yet they pleased the senses and exhilarated the mental faculties.

After a little, piles of roasted beef and mutton were served for the others, and lawful food, such as cakes, milk, candy, honey, and grapes, for the pilgrim. After the entertainment, grape-syrup was again served, and the Khan invited Yuan Chwang to improve the occasion, whereupon the pilgrim expounded the doctrines of the ‘ten virtues,’ compassion for animal life, and the paramitas and emancipation. The Khan, raising his hands, bowed, and gladly believed and accepted the teaching.”

Yuan Chwang’s account of Samarkand is of a large and prosperous city, “a great commercial entrepôt, the country about it very fertile, abounding in trees and flowers and yielding many fine horses. Its inhabitants were skilful craftsmen, smart and energetic.”


629-645. Xuan Zang (Hsuan-tsang). Chinese Buddhist monk and translator traveling across the Tarim basin via the northern route, Turfan, Kucha, Tashkent, Samarkand, Bactria, then over the Kindu Kush to India. Returned via the southern route. He spent his remaining life translating sutras into Chinese. .His travel and story became fantastic legends which were used in plays and novels, such as Wu Ch'eng-en's famous novel in the 16th century, Journey to the West. more to read:

"At the time when the Orkhon Monuments were erected, French and German nation was not formed." - Prof.Dr. Ahmet Taşağıl (Turcologist, historian)


Thus we can also add English nation to that, because Anglo-Saxons has emigrated to England in the 5th c AD....and they had interactions in culture and blood with the Turks. That's why we see many Turkish words in English, and some cultural artifacts, customs and traditions. 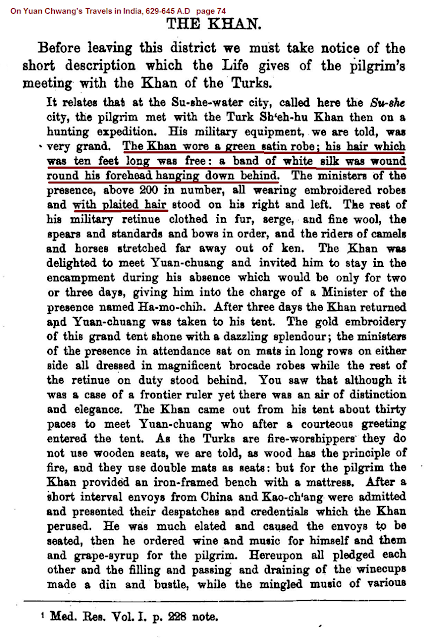 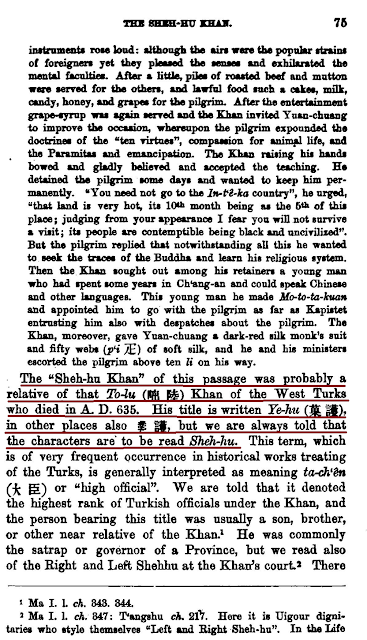 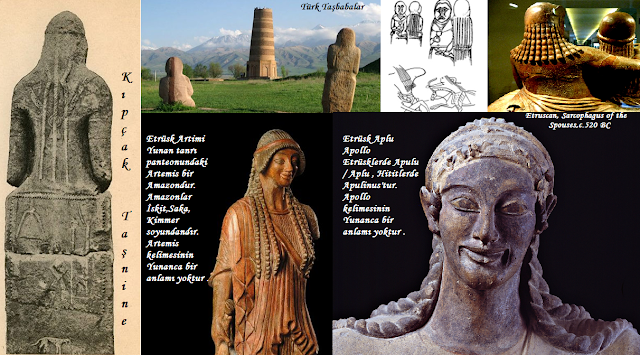 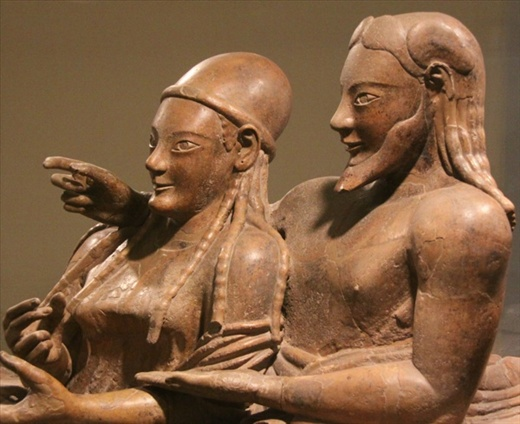 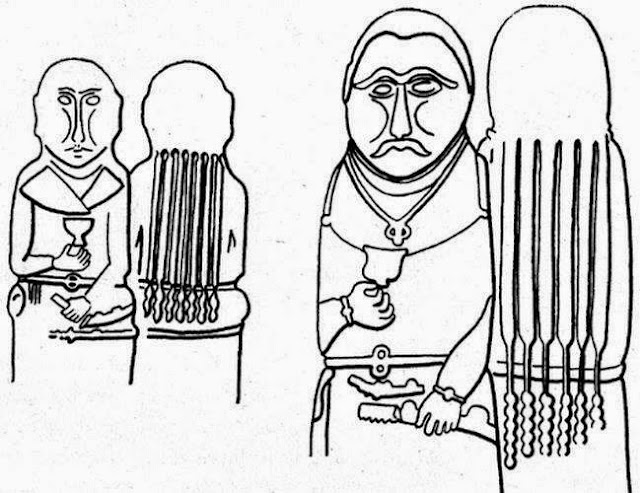 Turkish Taşbaba with his oath cup, dagger and long hair.
These "stonefathers" are used on graves, represents the brave fearless Turkish warrior or leader.

You can see it everywhere , from the Altai , Central Asia, to Europe....
from the Scythian Turks period (even earlier) till 15th c...

Ancestor of the gravestones.... 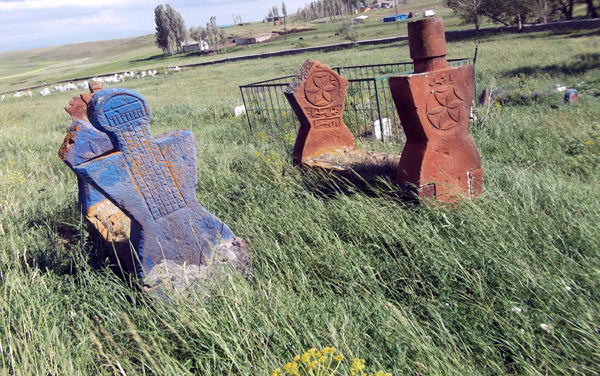 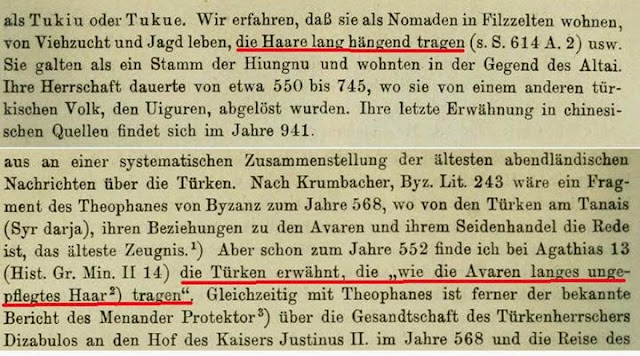 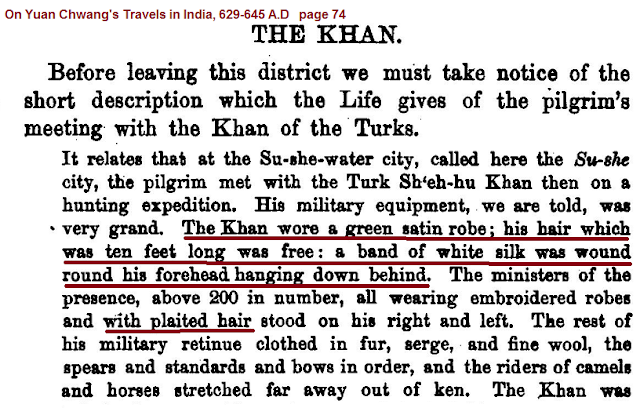 Delilah gets Samson to tell her the secret of his strength:
"My hair has never been cut," he says. "From the time that I was born, ..."
I wonder where the myth of Samson and Delilah comes from... ;) 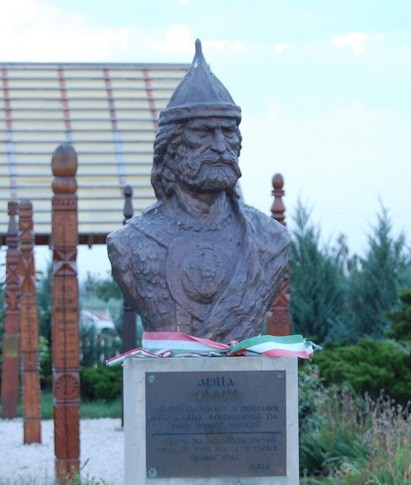 Under Attila (reigned 434-453 CE) the Huns became the most powerful, and most feared, military force in Europe. After Attila's death, however, his sons fought each other for supremacy, squandered their resources, and the empire which Attila had built fell apart by 469 CE

According to the Roman historian Priscus of Panium, the men of the army had cut their long hair and slashed their cheeks, so that the greatest of all warriors should be mourned not with tears or the wailing of women but with the blood of men. (is a expression of mourning in Turkish culture)

The Huns are descended of the Scythians and were the same people as the Xiongnu and they are Turkish of nation. Most of the scholars don't mention the word Turk on purpose!